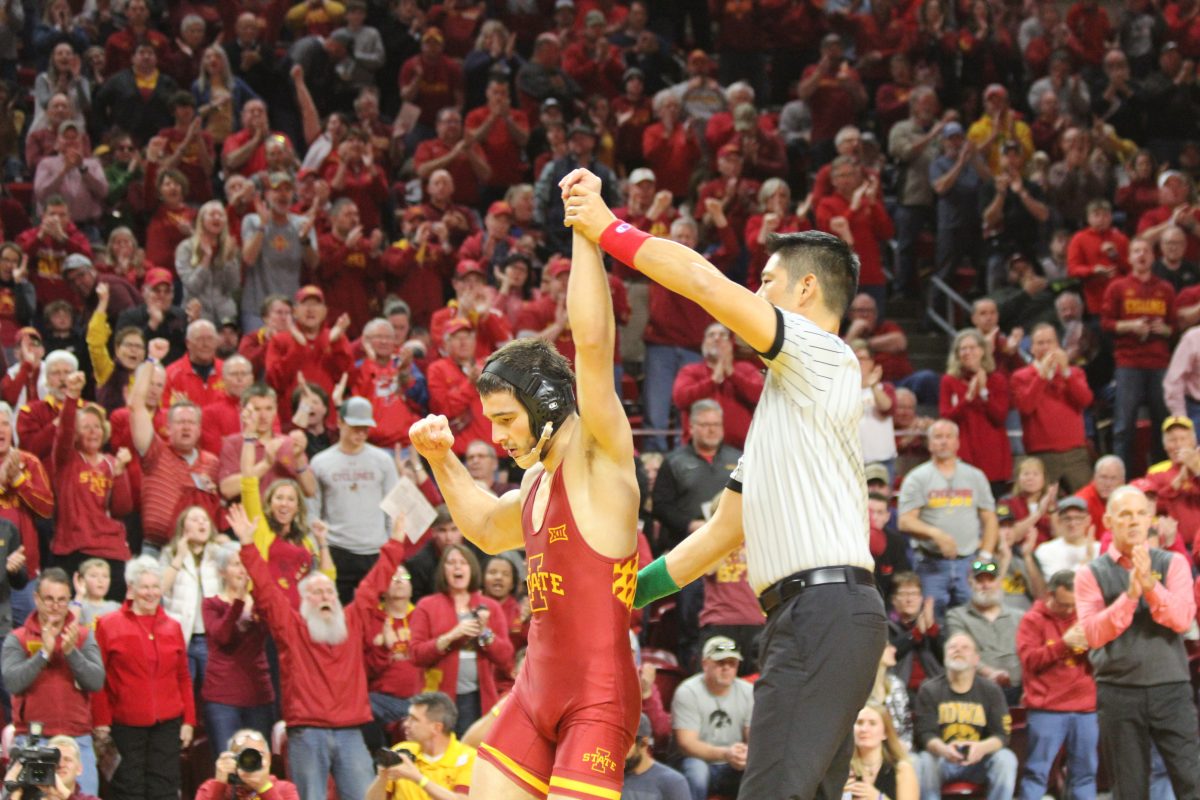 AMES — It has been ten years since Iowa State beat Oklahoma State on the mat.

Sunday at 2 p.m., the Cyclones get a chance to break that long, annoying streak — and the opportunity comes at Hilton Coliseum.

The excitement level is obviously high for ISU, which will wrestle at home for the first time in nearly a month against the eighth-ranked Cowboys.

“You’re talking about Oklahoma State,” Cyclones assistant coach Brent Metcalf said. “You’re talking about  (Hall of Fame coach) John Smith. You’re sitting across the mat from some legendary people and program. Having that opportunity is a huge deal. I think you get excited for it. Once you get to it you start circling it.”

This match also marks the first time ISU head coach Kevin Dresser will have the opportunity to host the Cowboys since taking over the Cyclones’ program.

A team triumph over Oklahoma State would definitely be a signature win for this program and this season. Although the Cyclones have some talented individuals, this team is needing a big win against a high-caliber team.

The Cyclones are 5-3 overall (2-0 Big 12) in duals. The five posted wins are good, but overall ISU hasn’t been great top to bottom on a consistent basis. An upset over the 7-1 Cowboys would prove that the Cyclones can take the upper-hand in those toss-up matches and that the guys who aren’t always “supposed” to win, can.

How does Dresser feel about those chances?

“I think we’re definitely capable of that,” he said.

But Dresser and his staff constantly drill into their team and themselves that the biggest opponent of the year is always the next one.

“They (the team) know what’s ahead of them, they know this is a big deal and they know that this is a rival in a sense of rival of the Big 12,” Metalf said. “I still want them to compete like its anybody else. Don’t get too emotional or hyped on it. Go in and take care of business.”

Some of the biggest issues with this ISU team stem from getting each wrestler to commit fully outside of the wrestling room. Dresser has been open about that. This time around, though, after being away from home for almost a full month, the Cyclones have had five straight days to prepare for the Cowboys — a longer turnaround than they’ve had lately.

Another reason an upset this weekend could become a pivotal moment for the Cyclones team is finding ways to win would blow the roof off of Hilton. Dresser in the past has discussed the way he feels the fans are ready to explode. This type of win would allow them to do that.

“One of the very first things that excited me about this opportunity almost three years ago now was the fact that Hilton Coliseum is such an electric place to wrestle. It’s a really, really fun place to be a college athlete at,” Dresser said.

That excitment ripples through coaches and athletes alike.

“I’m really excited because our team is just progressively getting better and better. We’ll be able to compete with them this year and I’m just really excited to compete against the best in the Big 12 and some of the best in the country in a dual meet setting,” redshirt junior Ian Parker said. “I can remember my first dual in Hilton was against Drexel. We actually lost that dual, but I remember the excitement of Hilton. (It) was just so crazy. Even in a dual like that I remember being blown away by how many fans were cheering. To compare that to what it is now and what we had at the Iowa dual and duals we’ve had in the past year… it’s crazy, it’s wild.”

Metcalf recalled feeding off the energy of crowds as an elite competitor on the mat. The cheers and screams could help infleunce his powerful — and often successful — efforts to turn a guy to his back.

“When the fans are there and the energy is packed, they can feel it. The stories I hear them talking about is when big things happen in a match. The noise and how things were shaking,” Metcalf said. “When they’re on the mat, they can feel it.”

But, a coach like Metcalf still has expectations of the team if they expect to receive the energy and crowd they dream of.

Well, the Cyclones still have a lot of season left before March rolls around but as the coaches say, this weekend they’ll face their most important opponent.