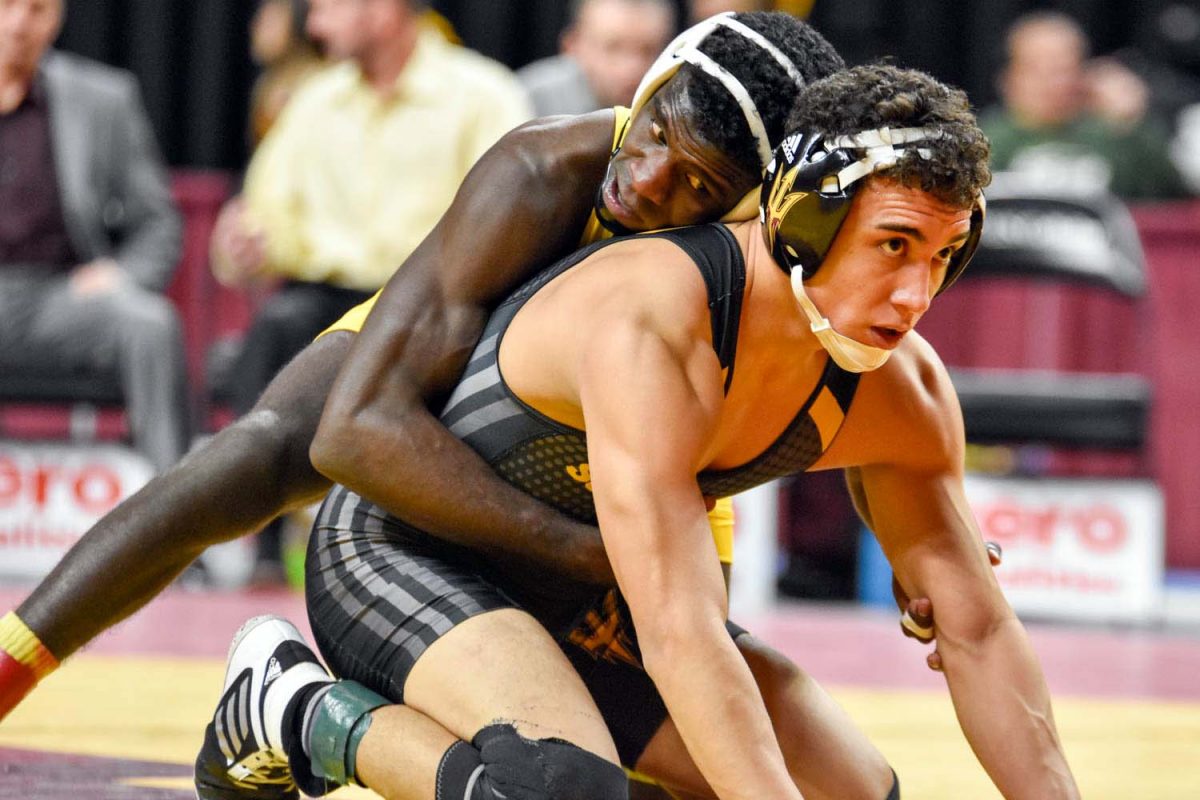 Earl Hall wrestled in the first Beauty and the Beast of the year, Friday, Jan. 6, 2017. Photo by Lani Tons

AMES — The Iowa State wrestling team has experienced a lot of losing this season. Against No. 14 Oklahoma and No. 1 Oklahoma State this weekend, the Cyclones couldn’t shake the losing habit.

In both duals, Iowa State was handily defeated. On Friday, Oklahoma  handed ISU a 30-12 defeat and on Sunday, it was the Cowboys, 34-3, which was the worst home dual loss in school history.

“Getting guys to wrestle to their true potential or close to their potential is something we’ve struggled with this year,” ISU coach Kevin Jackson said afterwards.

The program appears to be at some sort of a crossroad.

ISU athletic director Jamie Pollard hinted a couple weeks ago that if the wrestling doesn’t improve soon, a coaching change could be coming

“I don’t know,” Jackson said when asked how Iowa State can break its recent losing habit. “We will continue what we need to do as a coaching staff but eventually, some individuals have to take some ownership with the way they compete too.”

Jackson also stated that he takes majority of the blame for this season’s performance. He told his wrestlers that if they haven’t performed to their true abilities this year, it’s his fault.

While Iowa State once again didn’t really wrestle to its true potential against Oklahoma and Oklahoma State, the Cyclones did show some flashes of their true abilities against the No. 1 Cowboys.  Iowa State won one match and lost five of them by three points or less.

“I thought the effort was better, the energy was better man to man,” Jackson said on Iowa State’s performance against Oklahoma State compared to Oklahoma.

The two efforts Jackson was impressed by were 141-pounder John Meeks’ and 197-pounder Marcus Harrington’s.

Meeks took on a two-time National Champion, Dean Heil and stood toe-to-toe with him for the majority of the match. During one point in the third period, Meeks was only down 6-4 to Heil. Although Meeks eventually fell to Heil, 8-5, Jackson stated this was the best he has looked in a while.

Harrington was the lone Cyclone to claim a victory over a Cowboy (he defeated Derek White via 3-2).

“It was good,” Harrington said on how to felt to get back into the win column. “It’s been needed for a while.”

Although Jackson was pleased with Meeks and Harrington’s performance, he was still disappointed in the end result of the dual. He felt that if guys like Earl Hall and Lelund Weatherspoon would have been more offensive, they would have won their matches.

With these two losses, Iowa State is sitting at an uncharacteristic 1-9 on the season.

“Personally, I think we really all have to look inside ourselves and decide if we really want it or not,” said ISU 184-pounder Carson Powell. “We have to go on that soul searching journey to really find if this is what we really want to do. Do we want to go be a NCAA champion? Do we really want to be the best we possibly can be? It’s just that each of us, individually, have to find that one thing that is costing us be a little offset and we just have to keep each other accountable.”

Against Oklahoma and Oklahoma State, Iowa State was missing two of its top performers: 125-pounder Markus Simmons and 184-pounder Pat Downey. Both missed time due to completely different reasons.

According to Jackson, Downey tweaked his ankle before the Oklahoma dual. In the best interest of Downey, Jackson decided to rest him. However, Jackson saw that as a missed opportunity for Downey because a match against Oklahoma State could have greatly helped his seeding come the Big 12 Championships.

For Simmons, he missed this weekend due to a weight issue. Jackson is unsure if Simmons will compete during the rest of the season. 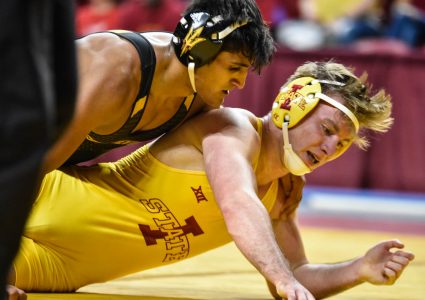