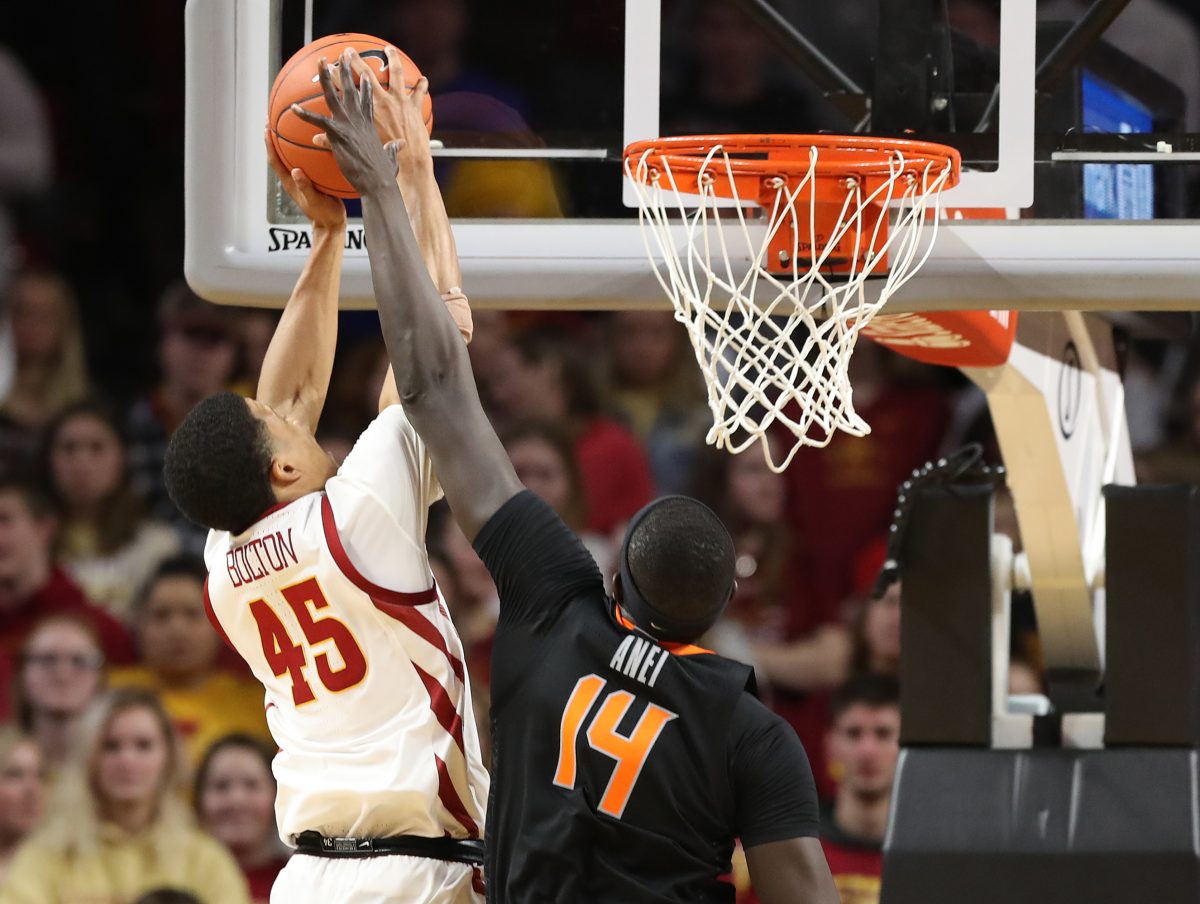 But his daring drives also help him when he’s standing still.

The talented Iowa State sophomore guard thrives on slashing to — or through — the paint, either to get to the rim, or identify an open teammate.

The serendipitous side effect? Less contested 3-point looks, which Bolton has been knocking down at an impressive 50 percent clip in the past eight games.

“It’s probably helped out a lot,” said Bolton, who hopes to remain hot beyond the arc in Saturday’s 11 a.m. (ESPNU) Big 12/SEC Challenge game at No. 16 Auburn (16-2). “Teams are probably playing me for the drive more, looking at my percentages early in the year. I’ve been working and they finally decided to fall, so I’m just happy they’re going in.”

It’s no secret the Cyclones (9-9, 2-4 Big 12) need Bolton to serve as a consistent secondary scorer and distributor to sophomore Tyrese Haliburton, who — aside from two outlier games — generally stuffs the stat sheet with per-game averages of 15.9 points, 7.4 assists and 5.9 rebounds.

But Bolton’s gains haven’t just come behind the 3-point line. The 6-3 Penn State transfer has notched three or more assists in six of the past eight games after doing that just four times in the previous 11 outings. Bolton also grabbed a career-high nine rebounds while playing all 40 minutes for the first time this season in Tuesday’s 89-82 win over Oklahoma State.

“We’re a different team when both (Haliburton and Bolton) are playing their ‘A’ game,” said ISU coach Steve Prohm, whose team is an eight-point underdog to the talented Tigers per KenPom. “We’re going to need that Saturday because of the way Auburn plays defensively. We’re going to need to put those guys up top and really spread them out and be able to dribble-drive and penetrate.”

Auburn blends skill and patience on both ends of the floor, ranking 33rd and 30th, respectively, in offensive and defensive efficiency, according to KenPom.

The Tigers are the Cyclones’ fourth opponent in the last six games ranked in the KenPom top 26 — and the previous three matchups all resulted in blowout losses.

So Saturday can serve as a springboard, or yet another stumbling block for an up and down ISU team still searching for its first road win of the season.

“Obviously, they’re gonna pack the house and it’s gonna be loud and we haven’t got a road win yet this year,” said Haliburton, who’s drilled 9 of 16 3-point tries in the Cyclones’ two conference wins. “Obviously we’re a young group, so gotta stick together and just keep going at it.”

Prohm called Saturday’s matchup with the Tigers yet another “mental toughness” challenge for ISU, which has lost five of eight games since upending 10th-ranked Seton Hall on Dec. 8 in Hilton Coliseum.

And if he wants to point to a single player as an example for the mettle required to leave Auburn Arena with a win, burly senior forward Solomon Young would be a worthy target.

Young scored a career high-shattering 27 points in Tuesday’s win over the Cowboys and drained 13 of 15 free throws while hitting the glass with gusto.

“He played at a whole different level,” Prohm said. “He’s rebounding out of his areas, chasing balls down; he blocked some shots; he ran the floor, just things you preach every dyad that all kind of came together, but I think our guys did a great job. We really wanted to get the ball inside and I think they made a conscious effort of throwing it in there and we didn’t settle.”

Nor will Bolton, whether he’s driving or spotting up from deep. He won’t press either, but will take what the Tigers’ defense gives him.

“It’s a big opportunity for the team just to get another win under our belt,” Bolton said. “We just get to play a good team in Auburn.”

Cyclones outpaced by Auburn, fall to 9-10