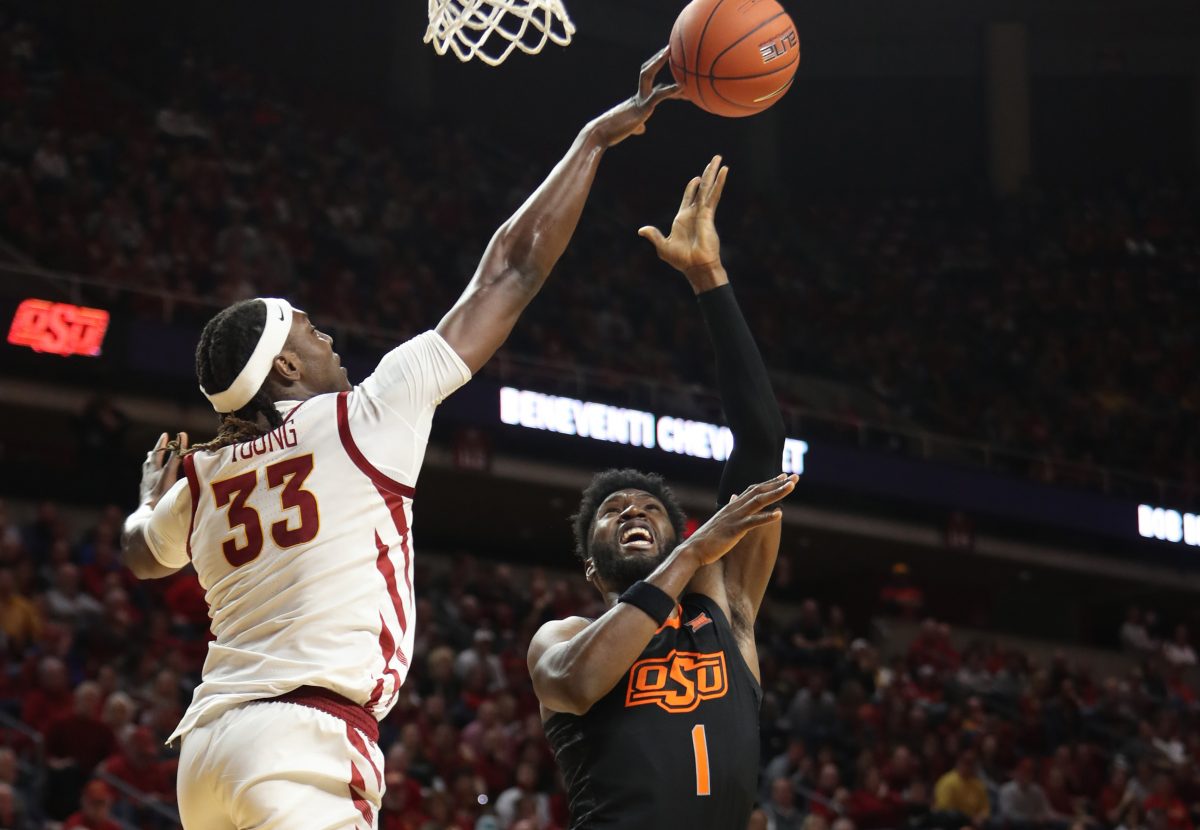 Young was sitting at the podium in the Pete Taylor Media Room just minutes after completing the best game of his college career. A career-high 27 points, nine rebounds and two blocked shots while shooting 7-of-8 from the field.

Still, the junior from Sacramento remained indifferent. He always does.

His sophomore point guard, who scored 20 points, dished six assists and grabbed six rebounds of his own in the Cyclones’ 89-82 win over Oklahoma State on Tuesday night at Hilton Coliseum, was smiling and giggling, as he seemingly always does.

“My boy looked like (Shaquille O’Neal) today. High seals, really burying people, establishing the post presence for us. He really helped us. Then he was at the free-throw line hitting the free throws, too,” Haliburton said. “He was hooping. He was definitely the difference for us today. Now, we’ve got to build on that and move onto the next one.”

When reminded that Shaq was a career 53 percent free-throw shooter, which certainly does not mirror Young’s 13-of-15 performance from the charity stripe, Haliburton had a quick response. He usually does.

“He looked like Steph Curry at the free-throw line.”

This performance was far from the Young we have grown accustomed to during his collegiate career. He was a crucial role player for a Big 12 Tournament title team in 2016-17. Each of the last two seasons was cut short by a myriad of injuries.

Surgeries on his shoulder, knee and groin during a two year period were holding him back from realizing the potential many people saw from his during his stellar prep career out west. He entered Tuesday night averaging 6.0 points and 4.1 rebounds per game in 77 career contests at Iowa State.

It has been only two weeks since Young was removed from the starting lineup in favor of sophomore center George Conditt. No, we never could have expected what we saw from Solomon Young against the Cowboys.

There he was snatching away offensive rebounds, three of them to be exact, during his first stretch on the floor and scoring 10 points before halftime. Next, he was streaking down the middle of the floor to slam home a thundering one-handed dunk in transition off a no-look assist from Haliburton, forcing an Oklahoma State timeout.

He stood near the basket and stared into Cyclone Alley flexing his muscles. The bring your lunchpail and hard hat mentality that had endeared Young to Cyclone fans during his freshman season was showing, but it was coupled alongside talent and athleticism that was suddenly making him a major difference-maker in a Big 12 game.

His confidence was sky-high and a new side of the always quiet Young was showing itself.

“He just played with an assertiveness,” Oklahoma State head coach Mike Boynton said. “Really aggressive, he finished around the basket, he made all his free throws. He was really, really good. We’ve got some guys in there who aren’t playing with a whole lot of presence in there right now and he took advantage of it like a really good player should.”

I have covered nearly every game of Solomon Young’s college career. There has never been a time, at least that I can remember, when an opposing coach called him a difference-maker let alone singled him out as a “really good player.” That does not mean Young is not, or hasn’t been a good player, it just means he is a guy who has generally done his work in the shadows, fine with allowing his teammates to take the spotlight.

Teammates like Haliburton, who’s million-dollar smile and soon-to-be multi-million-dollar game might as well be the spotlight. The light has shined even more brightly on Haliburton during the Cyclones’ last four-game stretch, which included contests with three of the league’s four best teams, and he has largely struggled, especially against those top-tier teams.

The biggest reason for those struggles can likely be attributed, on some level, to the struggles of Haliburton’s teammates. He has never been a guy who will break people down off the dribble by reaching into his toolbox like Kyrie Irving does at the next level or knock down shots from near halfcourt with a frequency like Trae Young once did in this league.

Haliburton is at his best when his primary role is setting things up for other people. He feeds off of other guys playing at a high-level, and on this night they were, most notably Young and sophomore guard Rasir Bolton, who scored 21 points on 5-of-11 shooting, 4-of-6 from deep, with nine rebounds and five assists.

That has not always been the case.

“(Haliburton) needs to be aggressive. He needs to always be in attack mode. Whether that’s to drive or score. Man, he and Rasir, they need to play well for us,” head coach Steve Prohm said. “That’s just reality. When they play well and then we have some post play, we have a chance to do some really good things.”

Iowa State’s chance to do some “really good things” can come, basically, instantly. The Cyclones already completed a tough six-game stretch to open Big 12 play, but their next four-game stretch could be even more daunting.

The Big 12/SEC Challenge brings a road trip to No. 16 Auburn, a team that opened the season 15-0 before losing two straight last week, this coming Saturday. That contest is followed by a visit from Baylor, a squad that was anointed as the No. 1 team in the land when the new AP Poll was released on Monday and beat the Cyclones by 13 points just last week.

It is hard to call a Big 12 road game a break, but the closest thing to it could come the following Saturday in the form of a trip to Austin to take on Texas, who lost by 38 to West Virginia to open this week. The four-game stretch ends with a flight to Morgantown and a date with those No. 14 Mountaineers.

Eleven days, four games, three of them on the road and three of them against ranked teams. Opportunities to build on this win over Oklahoma State are plentiful in the near future for Iowa State.

They always are in this league.

The question is whether or not the Iowa State team we watched on Tuesday will be the same one that shows up on Saturday.

Will we get the same Solomon Young who played with elite energy and high-level confidence? If not, will another of Iowa State’s posts step up in his place? How about the version of Rasir Bolton that plays downhill towards the lane rather than settling for contested shots?

The version of Tyrese Haliburton we get could hinge on all of those questions. If all of those questions end up being answered negatively, it could spell for a few long winter nights. But, those things turn positive and the Cyclones will give themselves a chance regardless of the opponent squaring them in the face.

“Whoever is playing well, needs to play. I mean, you saw that again tonight. It is the second half of the year. We’ve got to know who is being efficient and who can help us win,” Prohm said. “We’ve got to win games. That’s our job. We’ve got to keep getting these kids better.”