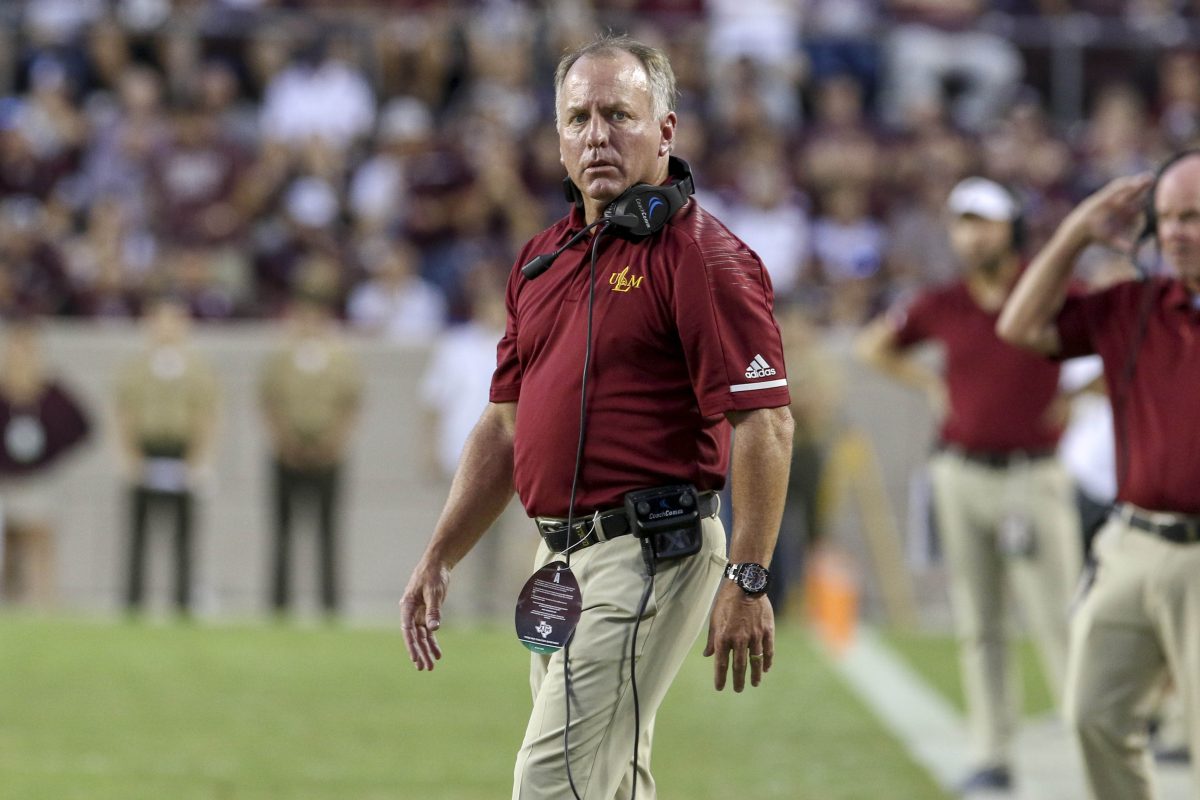 Louisiana-Monroe head coach Matt Viator met with the media earlier this week to preview his team’s upcoming battle with Iowa State at 11 a.m. Saturday morning on FS1. We’ve broken up what the 33-year college coaching veteran had to say about the Cyclones in a more digestible format.

The first several pieces are all excerpts from his nearly eight-minute-long opening statement, largely centered around Iowa State.

On the program overall and Matt Campbell:

“Really good opportunity for us at Iowa State. Really tough opportunity for us at Iowa State. 1-1 on the season right now, you look at the two games that they’ve played and they’ve just been unbelievably close. Literally down the wire in both of them and they’ve both been against their rivals so to speak in Northern Iowa and Iowa. Beating Northern Iowa in overtime and then losing 18-17 to Iowa with two weather delays, actually a six-hour game when you look at the game. Both of them have been really good games. Both of their games have been at home so this will be their third straight at home.”

“I think one thing that’s been really interesting, we’ve kind of done our research on them and talked to a few people or whatever, and they say the stadium is as loud as any that they’ve been in, 61,000, but the people that we’ve talked to say it’s unbelievably loud in the stadium. They did a nice job last year of pretty much selling out every game so that’s going to be interesting as well.”

“Really impressed with what they’re doing, with what Coach Campbell has done there. Of course, you look at his record and what he did at Toledo then going to Iowa State, it’s his fourth year and twice already he’s been the Big 12 coach of the year. So he’s done a really good job. You look at his resume and it’s really impressive. Started as a head coach in 2011, has won a couple of coach of the years at Toledo, went to Iowa State and won a couple of coach of the years. You look up and he’s 39 years old so really, really impressive what he’s done. I’m impressed with their football team. We all are as a staff.”

On the ISU offense:

“Really been impressed with (Brock) Purdy, their quarterback. I think he’s a really good football player, can run and throw. They’ve been kinda tailback by committee with (Kene Nwagwu) and (Johnnie Lang). Then receiver wise we didn’t really know going into the season because we broke down all their games from last year going in, but No. 1, (Tarique) Milton, has kind of emerged as their guy, eight catches for 144 yards last week against Iowa. (La’Michael) Pettway, the bigger guy, No. 7, had five catches for 83 yards.”

“We didn’t really know if you look at their tape last year, they had two of the best players, in my opinion, at their position in the country. (David) Montgomery, their starting running back, got drafted in the third round by the Bears and then Hakeem Butler, a young man that we knew that we tried to recruit at McNeese, he’s from Fort Bend, Travis right outside Houston and I think he went to Arizona. You look at those two guys last year, and they were a big part of what they were doing.”

“We think some guys have emerged this year. Typical o-line and tight ends, what I could consider typical when you’re going to play a Midwest team, big and they have the 6-6, 6-7 tight ends as well.”

On the Iowa State defense:

“Defensively, I guess the word I would use is multiple 3-4 because they’re going to do a lot of things out of it. I’ve never quite seen, in my years of coaching, some of the things they do and how they do it out of their 3-4 but, we thought we knew a little bit about Coach (Jon) Heacock coming in because he was the head coach at Youngstown, and he’s a really good football coach.”

“Looking at them, I think it kind of starts with No. 12, (Greg) Eisworth, he exemplifies what they are and who they are on defense. He’s 6-foot, 205 and he had 15 tackles last week so they’re going to move him around. He’s what they call their star guy. He’ll be down… He’s everywhere really lining up. Their nose guards, we’re concerned about, (Ray Lima) and (Jamahl Johnson), are big guys. (JaQuan Bailey) is, I didn’t know this until I was listening to the game the other day, but he’s actually one sack from their all-time sack lead at Iowa State. Based off what they do and what you see, they’re gap eaters and feeders in kind of what they do.”

“Everything kind of makes sense when you break it down. If you take the star, which is Eisworth, which kind of starts as the weak safety, you take (Lawrence White), their free safety and the three linebackers, 15 tackles by the star last week against Iowa, 11 by the free safety, eight by one linebacker, eight by the other backer, six by the other backer. That’s 52 of their total 80 plays tackles are by those five guys. Everything kind of spits to them in terms of what they’re trying to do defensively.”

“They play as good of team defense, if you just want to watch the tape and admire the way people play the game, and they play as good of team defense as anybody that we’ve played that I’ve seen in the sense that they run to the football and we talk to running to the ball, rallying or whatever. They play like their hair is on fire when you watch them play defensively. Really, really impressive. Love this football team. I think we do as a staff, too. When you watch them, I was telling our players yesterday, they play the game the way it is supposed to be played.”

On what makes Iowa State’s front-seven a challenge:

“They’re playing some of the… I don’t even know what to call it. Like a monster defense. The first time I saw it was I watched Rocky Long coach it at a football clinic. They did it with Brian Urlacher where you’re in an odd defense and the linebackers are at five yards then they have a guy directly over the ball at about seven or eight yards. That’s (Eisworth). I don’t care what blocking scheme you draw up, you’re not going to block him. They’re in an odd front and he’s just kind of that monster going wherever. They have some good schemes. They also play a bear front and they’ll add him to a bear front. Well, you’re not going to block him. We were going through some of the looks yesterday and the scout team safety that we had playing that position because it’s a different look so we’ve been looking at it a lot. Now, they don’t play it every down, but I was picking on our scout team safety saying, ‘You understand why he had 15 tackles this week because he’s standing there on almost every tackle.'”

“They are some different things that they’re doing. To answer your question, when you look at their front seven, of course, most of them are all back, too, so they’ve been playing a while. I think eight back on defense. These guys have played a lot of football so they’re experienced. I just like the way they play. They run to the football. One misses you, they’ve got help coming quick. I think that’s the key to their defense, that experience and understanding what to do and the level of intensity that they play with. I think it’s really impressive.”

On the mentality going into a hostile environment:

“To me, that’s the formula, but it’s easier said than done. That’s what Northern Iowa did. They got the game to the second half. You look at the game and Iowa State had almost out-gained them two-to-one, but I don’t care what happened, you get to the third quarter and the beginning of the fourth quarter and you’re right in there,  that’s the goal. Against this ballclub in that place, that’s harder than just saying it.”

On if Iowa State is comparable to the Nebraska team Viator faced while at McNeese State in 2014:

“Yes and no, but the football team reminds me more, and I spent all summer watching them, reminds more of Montana, South Dakota State. Those types of football teams and how they play. They block, they tackle, they can do that now. They do what they do and that’s what I was kind of thinking watching them play. The tall linemen, when you look at it, 6-6, 6-5, 6-7 tight end. That’s what I think of more when I think of the teams I’ve went up against.”

“The Nebraska team had kind of changed with (Tommy) Armstrong and the whole deal, they were more of a run and shoot type deal with no-huddle and hurrying and doing all those types of things. These teams here, I don’t think the issue is going to be necessarily what they do. It’s going to be, ‘Come get you some.’ That’s the attitude. It reminds me more of Montana in the heyday. When I was at the other place, that run with the Jackrabbits, you knew exactly where they were going to be each play and exactly how to play it, but they just executed as such a high level and played at such a high level that I think this team reminds more of those two.” 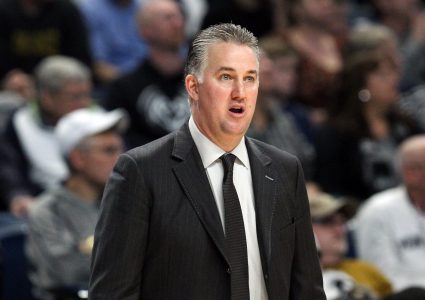