Few programs in the history of Iowa high school football have put together as dominating of runs as Dowling Catholic (West Des Moines) has over the past four seasons. The Maroons have won four-straight Class 4A state titles and produced handfuls of college prospects during that span.

That production of college athletes will continue in the 2018 class as the program has two players already holding multiple Power 5 scholarship offers and a few others that could earn them in the coming months.

Dowling has even drawn the eyes of some of college football’s elite as 2018 defensive end John Waggoner has picked up offers from schools like Michigan, Ohio State, LSU, Florida and Oklahoma in recent months.

Some questions and answers have been edited for clarity and brevity.

Q: Has the Iowa State staff been by the school since the spring evaluation period started?

Wilson: Coach (Eli) Rasheed was in (Tuesday) morning. He saw a couple of our kids. We happened to be doing our speed workouts and stuff like that at the time. Obviously, saw John Waggoner, saw Zach Ross, as well, which, right now, those are the two biggest ones. Saw Mitch Riggs, which is a linebacker. John Schmidt is a track guy he did not see. Mitch Goff was also in there, which is a lineman that has visited campus.

Q: I know John has sort of blown up in the last two months or so. What is it about him that makes him so appealing to programs like Michigan, LSU, Ohio State and, obviously, Iowa State?

Wilson: I think John has been very productive. I think he has the length that people like for whatever it is they’re going to recruit him for, whether it’s a defensive end in a four-man scheme or an outside linebacker in a 3-4. He’s a good athlete and I think they see him as fundamentally sound, which all of that adds up to being a pretty good college prospect.

Q: What do you think his recruiting timeline is going to be like? I’m sure it will be a little different for him than it might for most in-state prospects since he has such high-profile offers.

Wilson: I think that’s a good question. John and I initially talked about it would be nice to be done by as he’s playing through his senior year of football. Honestly, now how things have gone I just don’t see that being possible. But, I think the timeline’s really John’s. I think he’s in a situation with a lot of programs where he can dictate when he feels comfortable and he feels like he can make a decision then he can do that. Obviously, everybody can’t wait forever, but that’s something that we have to feel out as we go. I just want John to be able to do his homework so he can make a decision on what he feels is best.

Q: What does Zach bring to the table? I know he has a couple offers, including Iowa State.

Wilson: Zach is a tough, physical player and is someone that I think, honestly, should be recruited more. He’s as good as an offensive lineman as we have had here. I think people probably worry that he’s on the short side a little bit. He’s about 6-foot-3, he’s an inside offensive lineman, but someone that’s been a really good player for us and somebody that’s going to be a three-year starter. Another thing about him is age wise he could be a sophomore. He’s still young and I think he’s going to continue to develop as he goes.

Q: Another player Iowa State fans obviously know quite a bit about is Jake Hummel. What were your impressions of him in the time you had him and what’s he going to bring to the fold for Iowa State?

Wilson: Jake is a really good athlete. Somebody that even as a high school senior, look the part. I think at Iowa State he’s going to do nothing but get better. He was a really smart player and played in a lot of important ballgames. I think he just fits in what Coach (Tyson) Veidt and also Coach (Matt) Campbell are looking for in linebackers at Iowa State. I think their recruiting class that they just signed of linebackers with those two in-state guys will hopefully go a long ways to getting the guys that they feel most comfortable with.

Q: What have been your overall impressions of the Iowa State staff in the year and a half or so since they took over the program? I’m sure you’ve seen plenty of them with as good as your program is.

Wilson: Well, I couldn’t be more impressed than what I am. I think Coach Campbell is a great guy. I think he’s, obviously, doing a great job of changing everything about Iowa State football, but yet one of the things he’s doing is embracing the past. I think that goes a long ways as well. Just the whole feel, the whole dynamic, the whole culture of the program has a very good vibe right now. The staff is an awful lot of fun to be around. Great football guys, but really good people that I think are going to end up doing a really, really good job there. 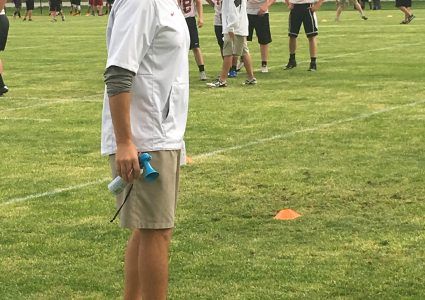