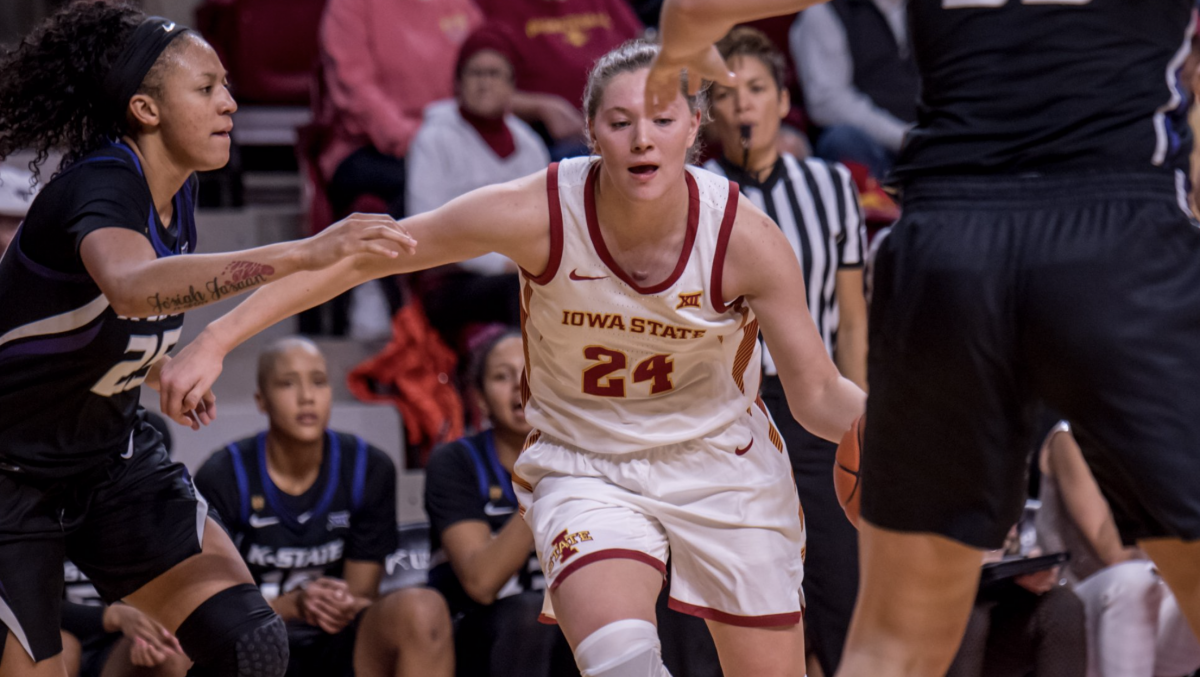 AMES — As the Iowa State women’s basketball team opened up its Big 12 season on Wednesday night against Kansas State, the play was relatively even in the first quarter. That is to be be expected in one of the best basketball conferences in the nation.

“Maybe it was just the comfort of the game and figuring everything out,” senior all-american candidate Bridget Carleton said. “Like I’ve said before, we need to be better in the first quarter and get out to good starts.”

Carleton had seven of her 26 points in the second quarter to help Iowa State flip the script so heavily from the first.

Head coach Bill Fennelly credited the shift in momentum to how well his team guarded following the break.

“Because we guarded better after the first quarter, the game started moving,” Fennelly said.

Regardless of what happened and why it didn’t happen until the second quarter again, it got Hilton moving.

“That second quarter was just a fun environment,” Carleton said.

Coming into the game, the Cyclones were shooting just 31 percent from the 3-point line, a stat that Fennelly has stressed needs to improve as the team moves into Big 12 play.

“It’s a funny game,” Fennelly said. “It’s like anything. You feed off of each other. When we’re making a few then people are ready to take more.”

The team was seemingly automatic from behind the arc.

Ashley Joens finished the first half 4-for-4.

Kristin Scott made each of her first three shots from there.

Inés Nezerwa even hit a 3-pointer on her first career long ball.

“We have a lot of people that are capable of shooting the three,” Carleton said. “When we’re firing on all cylinders, it’s hard to guard us. It really just opens a lot of other doors for us.”

Iowa State blew away its season best of 11 3-point field goals made.

“It’s always a goal to shoot well [and] in Hilton it’s even better,” Scott said. “You feed off the fans’ energy. Your teammates get excited on the bench. If one person knocks down a shot, then that gives the next person the confidence to knock down a shot.”

When the Cyclones weren’t hitting the shots though, they were finding the ball for second-chance opportunities. Iowa State earned 22 offensive rebounds compared to Kansas State’s 13.

That’s what drove the Cyclones’ pace. One offensive rebound led to a big lay in or a 3-pointer and helped Iowa State retain momentum.

Kristin Scott was as instrumental as ever in the Cyclones’ 36-point win. The sophomore finished the night with 19 points and 10 rebounds with a career-high three long-range makes.

Since the offseason between her rookie and second-year campaigns, the Minnesota native has been a different player for the team.

“That jump from freshman year to sophomore year probably changed her more than everyone on the team,” Fennelly said.

Wednesday’s game was Scott’s 10th career double-figure performance. Eight of those came this season. Not to mention, she earned her second double-double.

“My confidence altogether [is where I improved],” Scott said. “I feed off that from coach and my teammates, obviously. The freshman year is just a tough year, it’s a huge bump to get over. Coming into your second year, you kind of know what is expected from your coaches or your teammates.”

Fennelly mentioned early on in the season that if the Cyclones were going to be good this year, Scott was going to play a big part.

He added to it on Wednesday night.

“She’s a great athlete,” Fennelly said. “She accepts hard coaching. She never flinches. If her effort, her focus, her commitment, and her belief in herself matches what we have for her and what god gave her, she’s going to be scary good.

After the game, Kansas State coach Jeff Mittie had nothing but good things to say of this Cyclone squad. He called it the best Fennelly has had in years.

“I will say this,” Mittie said. “That’s the best I’ve seen them play in the five years I’ve been [here]. That’s the most confident [I’ve seen them]. Bill’s got a deep bench. They were very good tonight. We just could never get them to cool off.”

They certainly could be close. Iowa State’s 10-0 mark at home is one of the biggest signs to that. Fennelly agreed – at least for tonight.

The 38-point differential between the two teams in Wednesday night’s matchup was the largest the series has seen in its 92-game history.

This Iowa State team is different.

“I’d love to coach this* team forever,” Fennelly said. “This is one of those teams right now, that you don’t want the season to end. They are so much fun to be around. They love the game, they love wearing the Iowa State jersey. They care about one another. They accept hard coaching.

“They have something special.”