West Virginia head coach Dana Holgorsen was far from impressed with the passion of Iowa State’s fanbase after the Cyclones’ 30-14 upset win over the No. 6 Mountaineers in Ames.

While the topic of field/court rushing has become a hot topic in college sports debate over the last several seasons, Holgorsen took it a step further on Monday’s Big 12 teleconference.

“It was very unprofessional,” Holgorsen said. “Our job is to keep student-athletes in a safe place. When you’ve got thousands of people coming at you, it’s not easy. We didn’t have time to get them off the field. That’s not good.”

While the idea of expecting professionalism from 18-21-year-old kids at a sporting event (most likely the primary demographic involved in Saturday’s field rush) would be interesting to further discuss (not really), we will set that aside for the time being.

It is interesting from my angle to see Holgorsen attack anyone’s professionalism considering the way members of his team acted before/during the game and how he has acted since Saturday night’s loss in Ames. First, I was hearing that night, and multiple people have confirmed since, West Virginia players chanted a saying that rhymes with “duck you” at fans while taking the field, which clearly epitomizes professionalism in every way. 🙄

Then, there were his postgame comments which essentially disregarded anything Iowa State did and ignored the fact that his team was dominated in virtually every facet of the game. Now, we have everything he has said on Monday to add to the equation.

This is college sports we are talking about. There emotions involved! There are KIDS involved and nobody has ever accused kids of making the best decisions at all times (although, I don’t see this as a bad decision or really any sort of questionable decision because I think it is frankly irrelevant).

Really, the entire point from my angle is that this seemed like a good chance for Holgorsen to take the high road and just sweep Saturday under the rug. He did not do that.

I must say, I don’t know that I’ve ever been more unimpressed with the way a coach has conducted himself after a game at Iowa State than what Dana Holgerson has shown over the last 48 hours. From his postgame press conference to today’s comments. Classless from every angle.

“It was dicey there for a while,” Holgorsen said. “We rushed the main guys off and the rest got off on their own. Luckily we got out of there.”

On the bright side, Iowa State head coach Matt Campbell did not take the bait and did exemplify professionalism with his response when asked about Holgorsen’s comments.

“I really thought that our administration handled it very well,” Campbell said. “Instead of celebrating, a couple of our staff made sure the West Virginia team got off the field safely.” 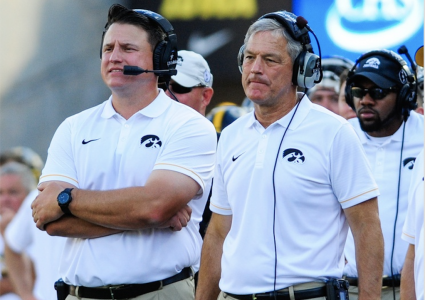