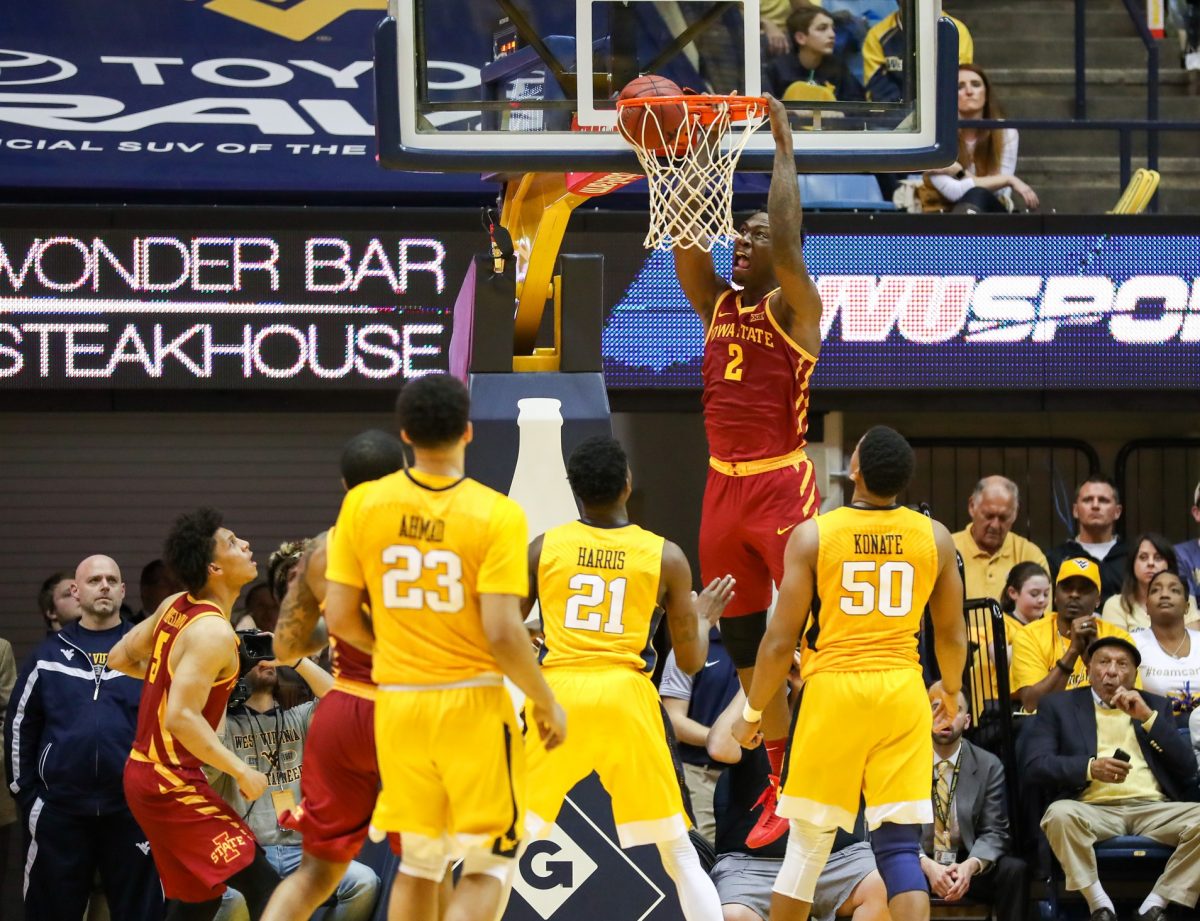 AMES —  Cameron Lard smiled, looked strong and spry, and joked around with his teammates.

Media day 2018 for the occasionally embattled Iowa State big man provided the perfect launching pad for Cam 2.0 — and he seemed to be enjoying the process.

“I’m having a lot of fun with this team,” said Lard, who spent part of the summer at Chris Herren’s wellness center in Massachusetts. “Like coach (Steve) Prohm said, the chemistry’s real good. It was good last year, but it could have been way better. Our chemistry is real good. Everybody’s got a bond for one another. It’s a great feeling.”

Lard’s struggles at ISU have been well-documented.

He was suspended the first three games last season. He had multiple minor run-ins with local law enforcement.

In essence, Lard was adrift mentally and emotionally — hence the decision to reshape his mindset 1,300 miles away.

“Most definitely it’s how to handle adversity,” Lard said of his reframed focus. “I kind of really struggled with it a lot last year when things weren’t going my way. I’d fall back to bad habits, so just learning how to deal with adversity — and I’m still working on it to this day, but just trying to get better and better off the court as much as possible.”

That reset’s been successful, though still very much a work in progress. It probably always will be.

Lard recorded six double-doubles in Big 12 play last season as the Cyclones struggled to find traction in the win-loss column, missing postseason play for the first time in the past seven seasons.

“That wasn’t acceptable for me, for this program, for what they expect around here,” Prohm said. “You can make a lot of excuses for it, but we didn’t get it done. It’s a new year. I think the good thing is these guys have learned from that.”

And his revamped body and mind help form the foundation for hope that the 2018-19 season will reacquaint ISU with national prominence.

Lard’s thunderous dunks, as well as elite rim protection at times, resonated most during his uneven rookie season. But his basketball IQ is often underestimated — and perhaps overshadowed by his off-the-court issues. Expect that to change this year for the Big 12’s best offensive rebounder, who is perhaps underrated as a passer.

“Coach Prohm calls me Magic Johnson,” said Lard, who totaled three assists twice last season. “The coaches call me Magic. Some of the players call me tragic, but they just be hating. I feel I have a very high IQ for the game and I just know how to make the right played make the extra pass. For instance, that game I hit Donovan (Jackson) in the corner and he made the 3. So just making the right play and doing the right thing.”

“Tragic Johnson, man,” joked Virginia transfer Marial Shayok. “Cam is the definition of hit or miss when it comes to passing, but he has a pretty unique skill set as far as vision on the court. Sometimes it works, sometimes it doesn’t, just like anyone else, but he’s willing to make that pass and he’s confident, so we’re really blessed to have someone that’s willing to pass out of the post like that.”

Lard’s continued growth constitutes both a challenge and an opportunity.

He’s grounded now, when he’s not flying high above the rim to slam, or slap away, the basketball.

The sky’s the limit, as long as he doesn’t get lost in the clouds.

“I think for him it’s gonna be long-term, what he learned,” said Cyclones assistant coach Daniyal Robinson. “But immediately, I think, you see a difference in his conversations. I think he has an appreciation for things. He’s been through a lot and I think just going there and just learning how to handle life’s challenges has been big for him. I think it’s a growth process for Cam and just to understand he’s got support from all of us. He doesn’t have to tackle these things that come up — adversity — on his own; that he’s got his teammates, he’s got the coaching staff, he’s got administration, I think those things will help.”

They already have. Lard knows he’s not alone. He’s also convinced the adversity that used to get the best of him can now nudge him toward new heights.

“We’ve got a great group of guys here, so I’m just so looking forward to getting his thing kicked off,” Lard said.

Fresh start. New hope. The past isn’t fully behind Cam Lard — he’ll still face some sort of as-yet unspecified sanction from Prohm — but it is just that: the past.

“I think that’s the one good thing, is I don’t think he’s a distraction with these guys,” Prohm said. “It think these guys like him. I think he’s done a good job of integrating himself with these guys. They understand what his issues are. They understand the growth that he’s gotta make and they’re trying to help him. So everybody’s in it together. He’s got a personality that everybody likes so I think the guys are all in a really good place with him. It’s just (that) it’s an everyday thing with him; just a process to get him better. I love him. I care about him. We’ve just gotta keep fighting the fight with him.”