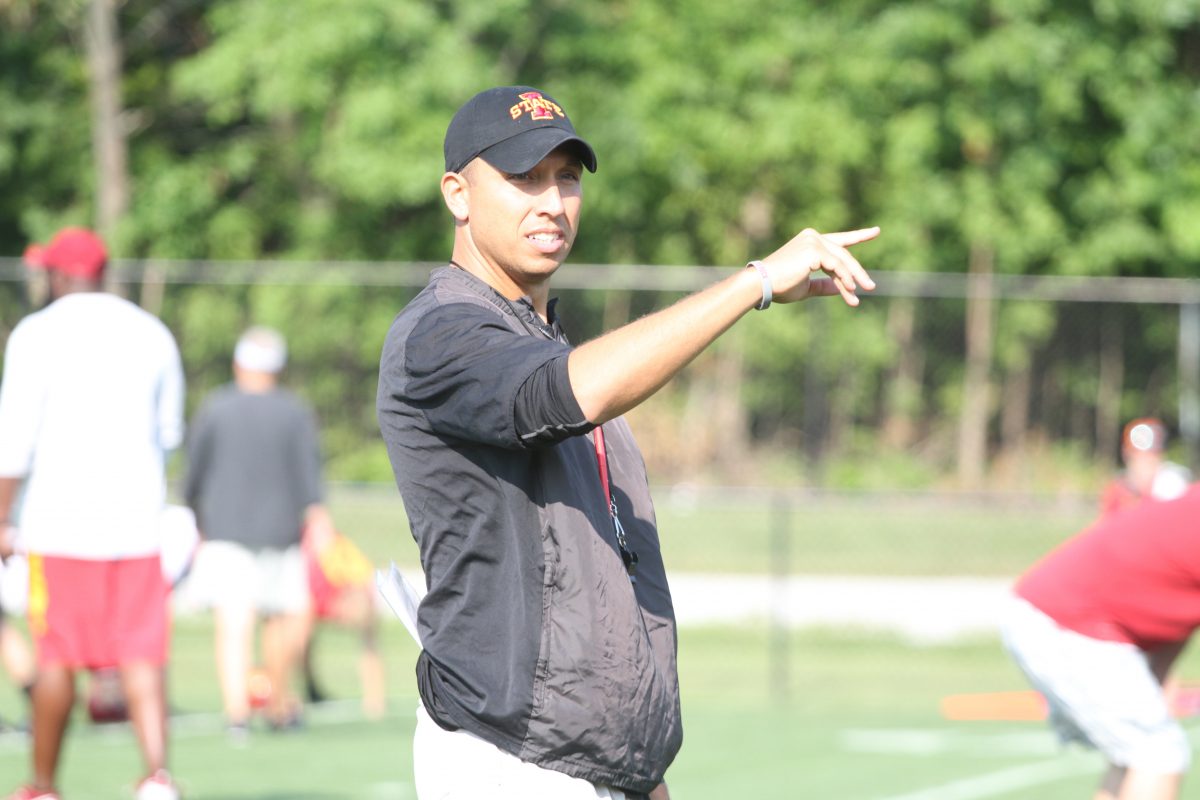 AMES — Iowa State is five days into fall camp and Matt Campbell is not toning down his expectations for sixth-year quarterback Kyle Kempt. If anything, the closer we get to the season, those expectations are growing.

It was in Dallas a few weeks ago when Iowa State’s popular third-year coach revealed that Kempt had put on 15 pounds of muscle in the offseason. However it was last Friday — the day Iowa State opened fall camp — when Kempt completed 18-of-21 passes and really popped for his head coach.

“I think the light really came on for me at practice one of this fall camp,” Campbell said. “It was really fun to watch Kyle this summer because you saw a confident young man. Repetition is the mother of all learning. Then you get the repetition in the environment of football. Then there’s the game where it really matters and keeping score, and Kyle got that last year.”

Kempt completed 66.3 percent of his passes last year while throwing 15 touchdowns to only three interceptions.

“What has been fun for me in watching these first practices is it’s almost like, ‘Wow, who is this guy? He understands the system. He’s another year in. He’s not making the same mistakes anymore. He looks like a really polished football player.’”

As previously noted, Kempt seemed more comfortable in his own skin at the Big 12 media days two weeks ago compared to last year. He did look bigger and put more zip on the ball during the opening week of practice as well.

Kempt’s touchdown to interception ratio was critical in Iowa State’s path to an 8-5 season in 2017. Add to it David Montomery’s incredible stat – only one lost fumble on the season (cough, cough) – and Iowa State ranked 16th nationally in turnover margin.

“We start every fall camp meeting with turnovers,” Campbell said. “We have eight criteria that we study. Over the test of time if it is college or the NFL, what are the criteria that drive your percentage up to win football games? The number one stat in all of football at any level is turnover margin. We were able to take another very positive gain in that statistic last year.”

“We are 10-2 when we are plus-one or more in the turnover margin,” he said. “That tells you what I’ve said, that our margin for error against the people we play is slim. We have to understand that and it all starts with that.”

Iowa State’s +10 margin from last year ranked the Cyclones second in the Big 12 behind Texas Tech.

Hence the continued admiration for Kyle Kempt. Campbell trusts his sixth-year senior who gets rid of the football quickly and doesn’t take a lot of chances.

When ball control, field position and protecting the football are your program’s keys to winning, the importance of your special teams unit is heightened.

Corey Dunn, a sophomore punter our of Australia, appears to have his job locked up.

“You’re talking about a guy who did it at a collegiate setting,” Campbell said. “We really feel confident about Corey.”

Kicker is another story. As of last Friday, Campbell wasn’t anywhere close to naming a starting place kicker for Iowa State.

Two men are battling for the job.

We know that senior Chris Francis will handle kickoffs.

“Chris Francis, if you study it, was one of the best kickoff guys in our conference,” Campbell said. “He has a success rate of touchback ratio as good as anybody in the Big 12. With that, you know he has a really powerful leg. We challenge Chris if he wants to be the place kicker on top of that, it’s all about consistency to be able to win that job. He had a really good spring for us.”

Francis has yet to attempt a field goal in his college career. He made an extra point in 2015 but besides that, Francis has strictly been used as a kickoff man. He kicked 38 touchbacks last season.

He’s being challenged by freshman Brayden Narveson, who most recruiting pundits tabbed as a top 10 prep kicker in America last year.

“Narveson on the other hand is a freshman with a lot of talent,” Campbell said. “It was good for him in spring ball to have some really good days and some really tough days. I think that competition will be hot and heavy every day. Two guys who we both feel like have a lot of upside and potential, but they have to prove it.”

Whoever wins the job has large shoes to fill. Considering Iowa State played in nine games that were decided by 10 points per fewer a year ago, one can make the argument that kicker Garrett Owens was a real unsung hero of the 2017 team. Owens converted on 17-of-22 field goals on the season including 11 from 40 yards or longer.

“It’s one area where there’s not a proven commodity,” Campbell said of his kickers. “They have to go out there and prove it.”

O-LINE MUST IMPROVE: This has become a bit of a theme for Campbell in the offseason. We can sit here and talk David Montgomery and Hakeem Butler all we want but in order for the Cyclones to take the next step as a program, Iowa State has to get better up front on offense.

Campbell reiterated that at media day.

“Our team will make great movement if our offensive line can take a step forward,” he said. “It’s a huge challenge for this year’s football team. It’s a huge challenge for the young men who play that position and I think everybody knows it. I think that group made really good headway this summer but until you put the ball down and the lights come on to play, you really don’t know where that group is but I think they are trending in a positive direction.”

STAND OUT:  “If you said ‘Hey coach, who is a guy who stuck out to you in the first four practices?’ It’s Matt Eaton.”

CAMPBELL ON COACHING: “How does each player tick? Not every kid is coached or can handle coaching the same way. I think that’s one of the things that I love. What we do is what every high school teacher in America is trying to do, engage and understand and provide them the best tools to be the best learner they can in the classroom. For me, everybody is different”

ON HAKEEM BUTLER: “You’re talking about a guy with explosive plays and plays down field, he maybe was the best player on our team last year. For him, confidence in his game with consistency is key. Those two were a great compliment to each other a year ago. Now he is a main focal point for our offense.”

MULTIPLE DEFENSES: “We have gotten faster. We have continued to add the ability to add some dynamic pieces. I think the neat thing for us is that we will have the ability to show a lot of different things and put ourselves in the best possible position to eliminate matchup concerns in a game but also give us the ability to create matchup success for ourselves from a defensive standpoint, which might be the first time we have been able to do that since we got here.”