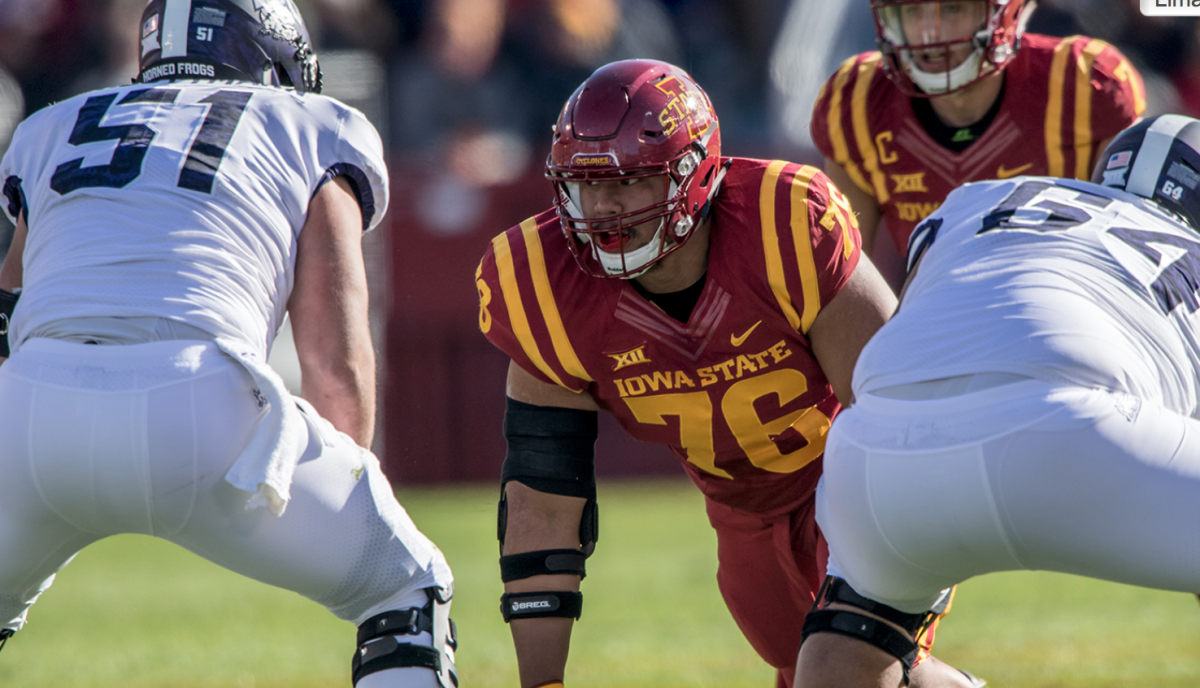 AMES — When Ray Lima strode onto Iowa State’s campus in January of 2017, he already cast a superhero-sized shadow.

Of talent, as a top-five JUCO defensive tackle.

Of hope, for a defense that had long-struggled against the run and on the scoreboard.

Of inspiration, if his work ethic matched his hard-earned accolades and burly, but athletic 6-3, 302-pound frame.

“I have no credibility to talk,” Lima said on his first media day a year ago. “I haven’t done a snap, but I think I learned a lot from (now-graduated senior) Vernell Trent. He’s been here. Just kind of soaking it all in and just got to wait and see what happens when it happens.”

Oh, it happened. And Lima — an honorable mention all-Big 12 nose guard in 2017 — turned his humble wait-and-see approach into a breakthrough starring role on the defensive front, just like his favorite anime characters, such as Naruto and One Piece.

In essence, Lima lived up to and even surpassed the hype. Now, he aims to do it again, with the help of fellow former “unsung heroes,” such as Jamahl Johnson and Spencer Benton, as well as emerging stars such as JaQuan Bailey.

“I really love our guys,” Lima said at this year’s media day. “I never use that word lightly. It means a lot that guys like Spencer, Conner Greene, you know, guys who just work in the dark and do what they do on our defensive front without getting noticed. Vince Horras. Guys like that. So just thankful for those guys and thankful for our whole defensive front. We call ourselves the ‘Chain Gang,’ so with a chain, you’ve got to have every single piece together. Everybody has a piece in our group, no matter if you’re seeing the field or not. That’s what’s great. We’ve got guys who know their roles. Know what they have to do in practice. Know how hard they’ve got to work to learn the playbook to help someone who’s going on the field. So that’s just great. I really love our guys.”

He loved them last season, too.

Lima — who often occupied two blockers last season — anchored a vastly improved line that helped the Cyclones rank 16th nationally in tackles for loss with a total of 97. No other ISU defense has produced more backfield stops, but the marked gains didn’t stop there.

The Cyclones catapulted to 23rd among FBS teams in rushing defense, allowing a mere 3.6 yards per carry and 128 yards on the ground per game.

Just one team (West Virginia) totaled more than 200 rushing yards in a game — and the Mountaineers needed 47 carries to barely do it.

In contrast, seven foes rushed for more than 200 yards against the Cyclones in 2016.

So the turnaround has been swift and virtually unprecedented. Now Lima can help cement the positive change with good friend Jamahl Johnson by his side.

“It’s a big year for this football team and it’s a big year for me individually, to come back from last year, especially with the injury that I had at the beginning of last year,” the 6-0, 295-pound Johnson said. “I’m just ready to get back out on the field and start the year right real fast.”

Lima and Johnson bonded almost immediately. They both adore anime. They also binge-watch shows such as Castle Rock together when they’re not working in the classroom and on the field. They laugh and joke one minute and twist and launch at towering O-linemen the next; two links in that well-soldered chain, never far apart.

“I love anime, Ray loves anime,” said Johnson, who turned a renewed commitment in the classroom into explosive progress in the football program. “That’s what really got us to hit it off as soon as we met, because not a lot of people watch it, depending on who likes it and who doesn’t. But he loves it and I love it.”

“You’ve just got to watch Naruto, man,” Lima said. “That show’s pretty great. It’s about a kid, you know what I mean, who grew up with kind of nothing and through his work, everyone started loving him.”

Seems familiar — for Lima and others on the D-line.

“In most anime shows, the protagonist is always set with a goal,” Johnson said. “He’s always set with a goal and most of the time he’s always achieving the goal. So an example, Naruto, his whole goal was to become ‘hokage,’ which is the president almost. So that was his big goal and he became that. And then in One Piece (another popular anime series), his goal is to be the king of the pirates and he achieved that goal, too. But it’s just like, through all the episodes they come across different obstacles and barriers they have to get over and they have all their buds with them, too, and it’s just like even when you think they’re about to lose, they always dig down deep and come back and triumph. That’s why I really like anime, to be honest.”

The timeless themes transfer perfectly to the brutal reality of life in the trenches, where bumps and bruises abound. The “Chain Gang’s” laughter morphs into a battle cry. Loose moments turn into hyper-tense exchanges they seek to surmount together, as one.

The “Chain Gang” mentality was devised and nurtured by defensive line coach Eli Rasheed, or coach ‘Sheed as his players call him.

Whenever a new link prepares to join the tightly-linked club, the expansion is met with alacrity, not wariness.

“We are a brotherhood,” said Australian transplant Matt Leo, who like Lima joined the team last season. “We’re together all year, so you want that close unity. I love it. They are my brothers, my family. I’m far from home so you want that connection with everyone. I love it. I couldn’t be happier with my group.”

Nor could Kamilo Tongamoa, another ballyhooed 2017 JUCO addition, who’s listed as Lima’s backup on the fall camp depth chart.

“They’re like my second brothers. I can go to those guys for anything. I love this group,” Tongamoa said.

Where does this love come from? Rasheed, for one. It’s unconditional save for one exception: You have to do the work, and do it well.

“The balance is me,” Rasheed said. “They know when it’s time to lock our jaw, it’s work. And we have a great time, so they’ve done a great job so far really working hard and having a good time being around each other. They relax. If you see one, you’re going to see all, so that’s incredible for me.”

I saw almost all the D-lineman arrive as a jovial, hulking pack when I interviewed Rasheed, Lima and others on media day.

While Rasheed spoke matter-of-factly about the “lockjaw” approach to on-the-field labor, Bailey burst in to pose a question about a planned post-camp dinner at his coach’s house.

“OK, but that Sunday after fall camp, all the ‘Chain Gang’ coming to your house?” Bailey asked.

Rasheed laughed for a bit, then lowered his voice.

Then he turned back to us, smiling.

“They’re fun,” Rasheed said of his group. “Then there’s a couple trigger words that bring it back in focus.”

Pay the piper. That’s three words. What does it mean?

“At the end of every practice for loafs, for missed assignments, for lack of effort, we have a special drill we call ‘pay the piper,’” Rasheed said. “No matter how grueling that practice is, you pay the piper. So those guys know it. They get on a line and then they just pay the piper.”

But, again, what does that mean exactly? Rasheed smiled faintly but declined to divulge specifics.

Pain can be good, especially when it translates to growth. It has for Lima, who’s now an established standout and leader. It’s working for Johnson, too, who raised his GPA from 2.2 to 3.2. His commitment in the classroom helped turn football into an escape instead of a burden. It’s fun again to toil in the trenches, even when the specter of paying the piper looms after an enervating practice.

“We just love to have fun on the ‘Chain Gang,’” Johnson said. “It’s just a very tight-knit group of people. I don’t know. We all love to joke around and we have a fun time during camp. (It’s) always a great time for people to come together because you’re with each other for two straight weeks and it’s all football. You grind through it together and you make a lot of bonds.”

Just like he did with Lima — centered on anime, of all things.

But looking back, that art form seems to be an appropriate common ground-based springboard.

Heroes come in many guises. Some are destined to be kings or rulers. Others don helmets for a different kind of glory each Saturday.

It shows, Ray, and it’s spreading.

“That’s why the characters are just so cool to me,” Johnson said. “Because they never give up and they always find a way to win.”