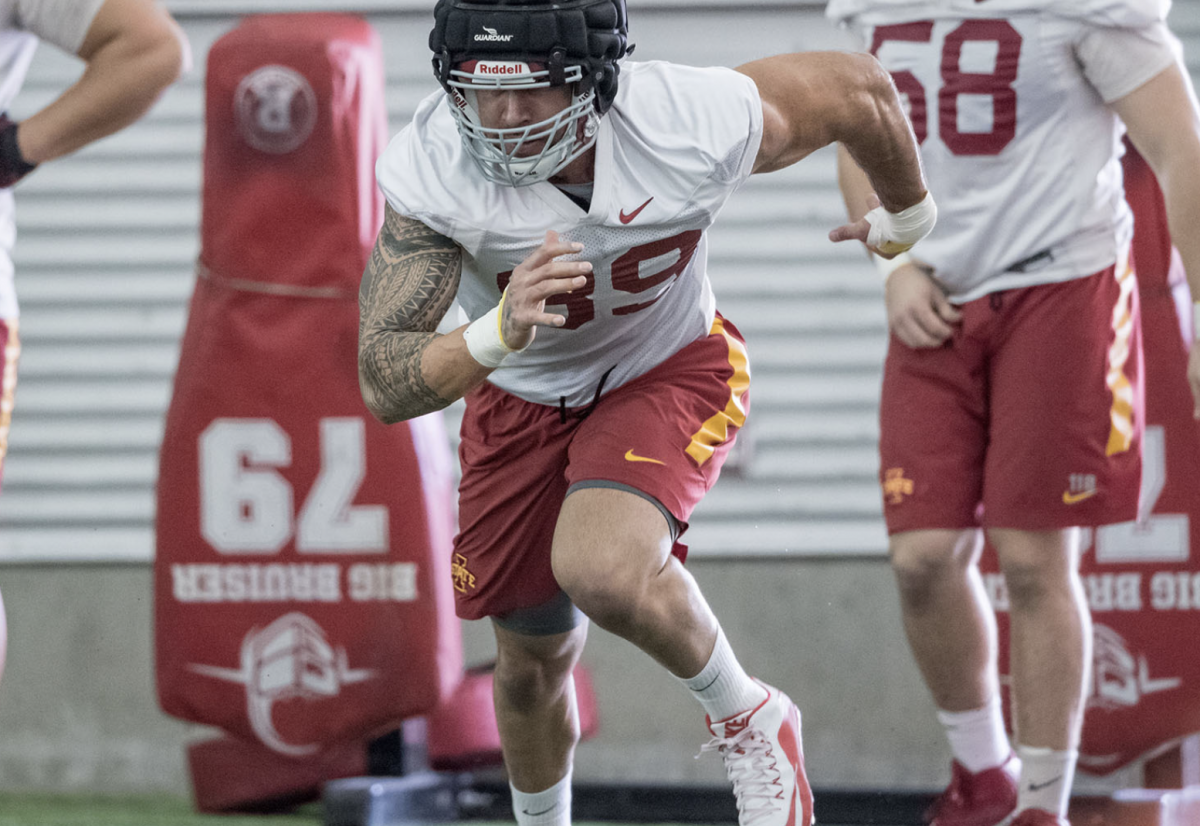 AMES — Iowa State’s offense has the potential to be one of the best in program history this fall.

As for the defense…well, there is a lot of work to be done for Iowa State to improve upon its 100th ranking from a 2016 campaign where the Cyclones finished 3-9.

It all starts up front, which is why bringing in junior college prospects Matt Leo, Ray Lima and Kamilo Tongamoa was so critical this offseason.

Two of the three – Leo and Lima – are already on campus and participating in spring drills. Tongamoa is scheduled to arrive in June.

The early results – stressing the word early – are mixed.

According to defensive line coach Eli Rasheed, Lima would be a starter inside if the season started tomorrow.

“He has a really good football IQ. He handled our install pretty good and is really active. He’s a big, strong guy who is active.” Rasheed said on Tuesday morning. “Right now, he is our starter right now.”

As for the hulking 6-foot-7, 265-pound Austrailian defensive end named Matt Leo – he is exactly what was to be expected for a guy who hasn’t played a lot of ball. Very raw.

“He is behind a little bit. Obviously not physically, just football reps,” Rasheed said. “He really played a 3-technique in junior college and we are playing him on the end. Things are happening a lot faster for him. We are going really slow into it and hopefully will have a good summer and fall with him.”

Rasheed said that along with Lima, veterans J.D. Waggoner (DE) and Vernell Trent (DT) are repping with the ones right now. A guy who everybody seems to be talking about these days, former walk-on Spencer Benton is the other starter at defensive end.

It’s only March 28 though and guys like Lima, Leo and Tongamoa weren’t signed to ride the pine.

“If he can come in and get himself ready for the conditioning part of it, we will play him,” Rasheed said. “But he has to spend a lot of time with Coach Wade.”

That’s all typical for a summer JUCO, especially at this position.

As for Lima, who will have an entire winter conditioning season along with a spring season behind him, the immediate expectations are a bit different.

“He is going to play as much as he can handle,” Rasheed said. “He is and Kamillo, that’s the reason why we signed those guys. We want to get him as many plays as we can.”

— Rasheed noted that senior Vernell Trent is nearly up to 300-pounds.

“He is our most experienced player,” Rasheed said. “He has changed his body. He’s closed to 300 pounds and is really physical.”

— Rasheed on what he learned about what it takes for a defensive line to be successful after spending a year in the Big 12.

“You have to have size,” Rasheed said. “Size starts on the inside. You have to have length and pass rush on the outside. We have recruited those body types so we look a lot more physical inside. We have 6-6, 6-7 guys who are active on the edge. Now they have to go prove themselves.”

— Two intriguing young guys at defensive tackle: Jamahl Johnson, who played as a true freshman, and Joshua Bailey, who redshirted.

“Both of those guys came in and probably gained 20 to 30 pounds in a couple of months,” Rasheed said. “It’s one of the reasons why we went to a nutritionist and took a strong look at what we were feeding them. They’ve gotten themselves to really look like good defensive linemen. Jamaal and Josh also had really good winter conditioning work and that is carrying over to spring football.”

— As for JaQuan Bailey, the 6-foot-3, 260-pound defensive end was really sharp as a true freshman tallying 3.5 sacks along the way. The coaches are preaching consistency with him. Regardless of what the depth chart looks like on March 28, this is a guy who will see significant playing time in September.