It was a career night for Bridget Carleton and Emily Durr. Carleton became Iowa State’s single-season leading scorer in Big 12 action, bringing her conference mark to 347 this year. That bests Lindsey Wilson’s mark set in 2003.

Durr was outstanding offensively for the Cyclones, turning in a career-high in scoring. She buried 27 points on 9-of-20 shooting on the night. She also grabbed three boards and assisted on five ISU makes.

How It Happened
Iowa State climbed out to a 19-18 lead after the first quarter. Adriana Camber and Durr combined for 13 of the Cyclones 19 points, while Carleton dished out three assists.

However, the Jayhawks would claw back and take a 35-31 lead into the locker room. Both teams shot at a great clip in the first half, with Kansas pouring in 50 percent of their attempts and the Cyclones 41.9 percent of theirs. The difference in the first half came at the free throw line, as Kansas hit 5-of-6 attempts and the Cyclones not making a trip to the charity stripe.

The Cardinal and Gold did a great job at protecting the ball in the first half, only turning the ball over five times. Carleton finished the half with 11 points, four boards and four assists.

In the third quarter, the Cyclones outscored the Jayhawks 17-7 to claim a 48-42 lead heading to the fourth quarter. ISU held KU to 3-of-15 shooting in the third, including 0-of-8 from deep, while forcing five Kansas turnovers.

The Jayhawks made a late run, cutting the Cyclone lead to just four with under 90 seconds to play. Carleton found Camber and Durr for a pair of threes at the top of the key that became daggers in the Jayhawks‘ comeback efforts. ISU hit its free throws down the stretch to cap off its fifth road victory of the year.

Cyclones of Note
Bridget Carleton set a career high in assists on the night. She churned out seven assists while adding 17 of her own points to the Cyclones’ offensive efforts. Carleton has scored in double figures in every game this season.

Emily Durr tallied her ninth career 20-point game, and the sixth of the season, as she poured in a career-high 27 points. The senior also dished out five assists and brought in three rebounds.

Next Up
Iowa State turns its focus to the postseason. The Cyclones are headed to the Big 12 Championship in Oklahoma City, Okla., where they will be the No. 7 seed. They will face tenth-seeded Texas Tech at 8:30 p.m. on Friday on FCS. 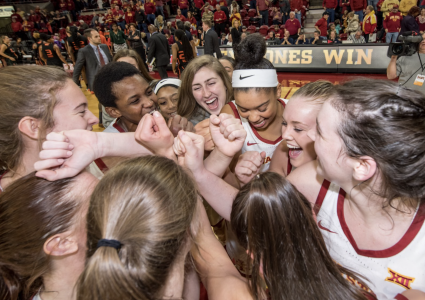