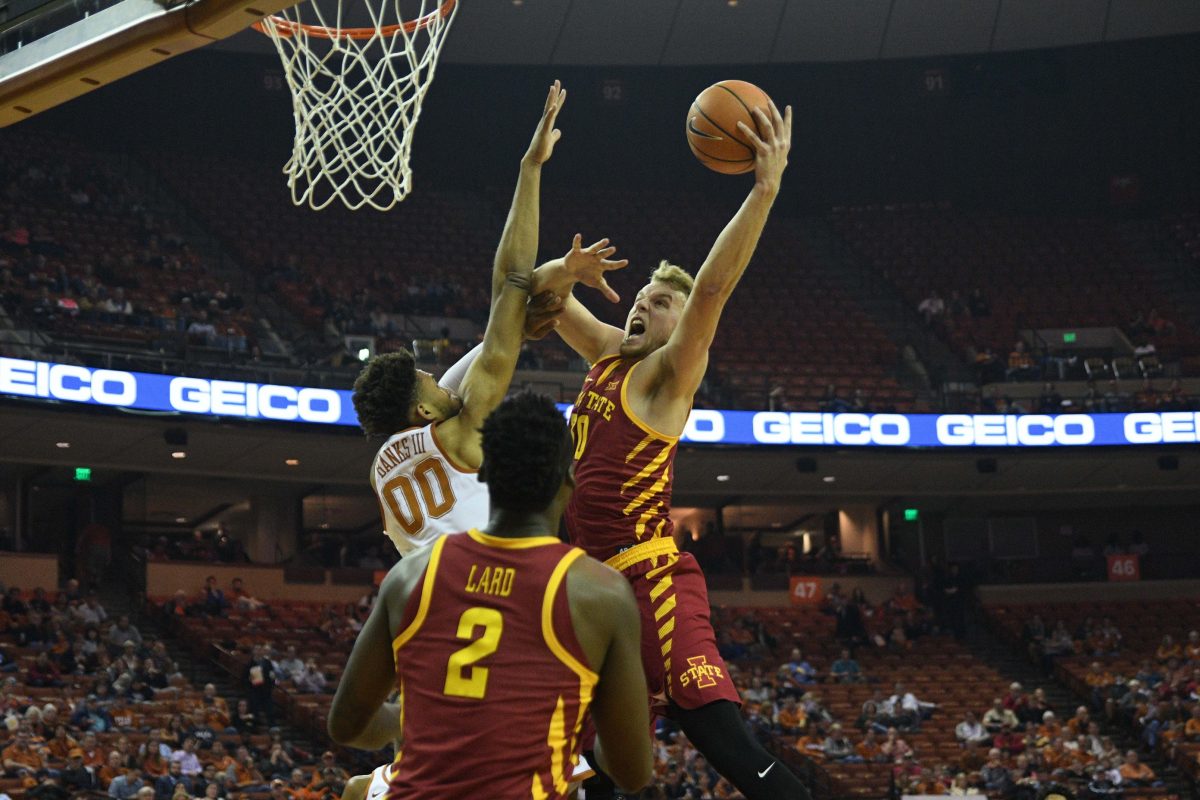 At the Hill School in Pottstown, Pa., an ankle injury relegated him to the bench.

“I was telling one of our managers the other day, ‘I’ve never played in a senior night,’” said Brase, who gutted out six minutes on aching knees and another gimpy ankle in Saturday’s loss at West Virginia. “In high school, I hurt my ankle right before. And obviously at Princeton I didn’t play, so this will be, knock on wood, the first time that I’ve played in one of my senior nights.”

Knock on wood, indeed — for Brase, fellow grad transfer Jeff Beverly and two-year Cyclone, Donovan Jackson, who lost his father, Don, a week ago at the age of 52.

This hard-working trio will be honored before, during and after Tuesday’s 6 p.m. Big 12 home finale at Hilton Coliseum.

Expect rousing ovations, especially for Jackson, who planned to rejoin the team late Monday after grieving at his father’s funeral Saturday in Milwaukee.

But all three of the Cyclones’ seniors showcased more than skills, leadership and slick long-range shooting during this transitional season.

They toiled. They bonded. They sacrificed in ways large and small too numerous to fully catalog.

“Like I told them yesterday at practice, ‘Where we’re at right now (13-15, 4-12), for this program, you know, it’s unacceptable,’” Prohm said. “We have to be better. We will be better, but maybe we had to go through this to get something better at the end of the day. So that’s why when those guys leave here and they look back next year, they need to see the growth that these other guys have made — and then hopefully, that will be their reward, of seeing these guys, because they’re still part of it. … The biggest thing I’ll say to (these seniors) is that they’re a part of this thing forever and when we’re having success next year, you need to feel like you’re a part of that, because you helped these guys along the way.’ And they all have.”

From Brase, who missed five straight games before returning for the loss in Morgantown….

“Hans, just physically trying to get through things, has sacrificed,” Prohm said.

To Beverly, who went from starting every game to sometimes not even seeing the court at all as star freshman forward Cameron Lard matured and blossomed …

And finally to Jackson, whose 87 made 3-pointers this season ranks ninth all-time at ISU — and he’s just 15 back of single-season record-holder Dedric Willoughby …

“Donovan — point guard, off guard, point guard, off guard,” Prohm said. “He’s sacrificed and obviously he’s been through stuff that people can’t even imagine. I think each (senior’s) done it in their own right. I wish as a head coach you could give these guys more success, because that’s what it’s about at the end of the day, seeing those guys happy and successful. But hopefully there are still some things they’ve learned from being here this year.”

To reprise that type of performance, his team will have to shine on the defensive end, thrive in transition and space the floor well.

You know, the usual stuff.

“He’s hit a lot of big shots over the last two years for us here,” Prohm said of Jackson.

Brase simply wants to be healthy enough to hit the floor for his scheduled senior night start for once.

The mind’s willing. The body must be able.

“Hopefully I’ll get to put on a show and kind of use up all the things I was gonna use my other senior nights and put it all into one game,” Brase said. “It will be fun.”

Hans Brase out with sprained ankle vs. Maryland Eastern Shore