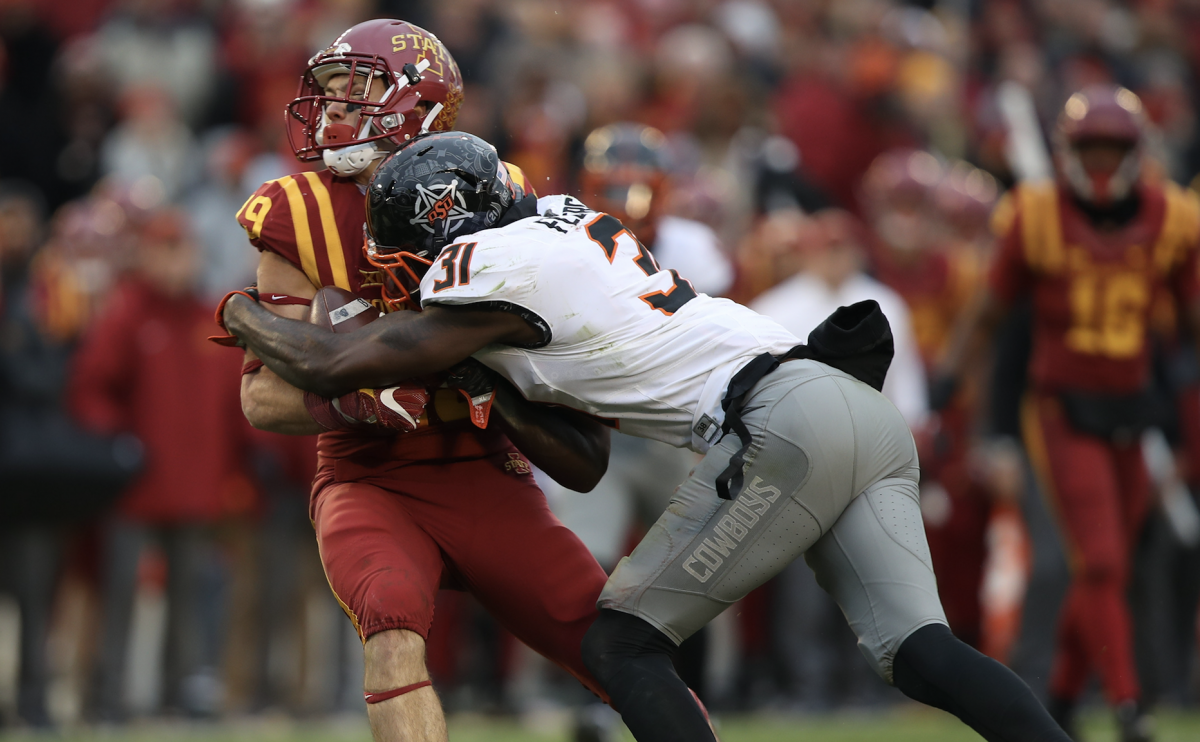 Almost immediately after the now-notorious bang-bang play in the corner of the end zone featuring Marchie Murdock and A.J. Green, you could hear me shouting “TIE GOES TO THE OFFENSE!” from section N in the south end zone. The angle I was watching from along with my dad and brother gave me a pretty good view of the play that would ultimately be deemed a game-clinching interception for the Cowboys. It looked like Murdock had one hand firmly pressed in possession of the ball as both players fell to the ground, but it was hard to believe the officials would see it that way too, especially considering the ball was in the OSU defender’s chest from the air to the grass.

On cue, the officials took a few moments to confer and decided Green had assumed sole possession of the ball. Even though they went to the replay booth to review, I knew the Cyclones had virtually no chance of getting the call on the field reversed.

I felt anger toward the officials like I’d felt so many other times as an Iowa State fan. Ask any loyal Cyclone to name times where the refs directly influenced the outcome of an ISU game in a negative manner and even a casual fan would likely be able to rattle off a few specific memories…

Seneca Wallace was in. Tony Yelk made the field goal. Jeremiah George stripped the ball. Even something as recent as Hakeem Butler’s escape that was prematurely blown dead from the West Virginia game a week ago.

I despise “blame the refs” guy as much as the next, but it still hurt to see what was objectively the wrong call snatch defeat out of the jaws of victory for the good guys once again.

Matt Campbell, always on-point, had this to say after the game: “It’s one of those bang-bang calls. I could sit here and complain about it, but that’s not who we are, and that’s not what we do. There’s a million different plays that we could have made in the game to not be put in that situation.”

Even though I was mad about the way Iowa State lost, one thing that was different about Saturday was that it didn’t feel like it was a now-or-never opportunity. Many of those past disappointments would have been flash-in-the-pan accomplishments for a program that has been historically pitiful. The biggest win in school history against Oklahoma State in 2011 ended up being its own isolated cause for celebration. The largest impact it left outside of November 18th that year was qualifying ISU for a bowl game… Which that team would eventually lose.

Thanks to two monumental victories from earlier this year, Saturday’s loss felt more like “we missed that one, but we’ll get the next one” instead of “that was our one chance for glory.” In other words, the Iowa State fan base is actually starting to believe in its football team, career .453 winning percentage be damned. It’s a breath of fresh air and will hopefully become the norm now that Coach Campbell’s culture change is starting to pay dividends.

The Sunday (?) After: Oklahoma State

I was as surprised by Monday night’s blowout loss to UW-Milwaukee as anyone. Any realistic Cyclone basketball fan knew this year’s team would go through some rough patches, but I don’t think anyone expected a result like losing by 18 to a team picked to finish 8th in the Horizon League – in Hilton Coliseum, no less.

It’s hard to stomach the thought of being genuinely bad in basketball now that ISU has qualified for the NCAA Tournament in six straight seasons, but it might be Iowa State’s new reality. At least for awhile.

I’ve seen a few people compare this year’s team to the 2010-11 squad that ushered in the Fred Hoiberg era. It makes some sense with the parallels of a senior point guard expected to be the leading scorer surrounded by transfers and some talented freshmen. However, another comparison I’d like to lob out there is comparing this year’s basketball team to last year’s football team.

Let me explain. Throw out the years leading up to both of those teams and look solely at the job Campbell faced then and Steve Prohm faces now. Coach Campbell came in his first year and had to help his players learn how to win by teaching them how to prepare to win. He had to establish an identity for Iowa State football and he had to get his players to buy in.

That’s quite similar to the task that’s currently in front of Coach Prohm.

Even though Donovan Jackson, Nick Weiler-Babb and Solomon Young contributed to last season’s NCAA Tournament team, none of them were more than role players. This year, they’re all learning how to be major contributors.

Even though Lindell Wigginton, Terrence Lewis and Cameron Lard were all successful high school players, they’ll still take time to adjust to the speed and style of the college game.

Even though Zoran Talley, Jeff Beverly and Hans Brase have played collegiate basketball, this is their first year learning Prohm’s system and gelling with their new teammates.

A lot of people, myself included, might have underestimated the magnitude of molding this year’s basketball team into a contender. There’s a slew of reasons to like each player individually, but chemistry is so important in college basketball, and one of the surest ways to develop the leadership, selflessness, and abilities of a good basketball team is trial by fire. Unfortunately, sometimes that fire is going to burn along the way. See: Monday night.

It’s a harsh dose of reality for we loyal Cyclone basketball supporters who have grown accustomed to winning during this decade. However, I’ve re-adjusted my expectations for this basketball season. The goal is still the NCAA Tournament, but there might be a few more bumps along the road to get there, especially early-on.

What I hope to see out of Iowa State this season is a team that learns what it takes to win basketball games as the year progresses. The players must learn to make sacrifices for the team and Coach Prohm must put the players in the best position to find success. That’s something that Campbell has done very well with the football team and I believe Prohm can do the same on the hardwood.

It’s always easy to get down after tough losses by the teams we hold near and dear to our hearts, but don’t give up on the Cyclones. Whether it’s having the game literally ripped out of our hands in Jack Trice Stadium or sitting through an early-season (major) growing pain in Hilton Coliseum, we as fans must stay the course. After all, that’s what our coaches are preaching to their players right now.