Abdel Nader‘s first — and possibly, only — season in the NBA D-League led to him attaining a top honor.

Thursday, the league announced that the former Iowa State star had been named its Rookie of the Year. The D-League’s 22 coaches voted on the award.

Nader averaged 21.3 points, 6.2 rebounds and 3.9 assists for the Maine Red Claws. He’s expected by parent club Boston to contend for a roster spot at the NBA level next season.

“Pretty impressive at this level and the way he does it is also impressive,” Red Claws coach Scott Morrison told Cyclone Fanatic and the Des Moines Register before a game against the Iowa Energy. “He can get to the rim and finish with his left hand, he can get into the paint and use his mid-range game and he can knock down 3’s with the game on the line. He’s an excellent scorer, excellent offensive player and if we can get his defense caught up to that, he’ll have a long career in the NBA.”

“It’s nice to be wanted,” Nader said before the Energy game. “Anytime you’re wanted it’s a good thing. I think that’s helped me a lot, just knowing that, because the D-League season is a long season. It’s a grind. Travel sucks. Almost everything sucks about it except actually playing, so it would be hard to do if the Celtics organization didn’t have my back like they do right now. Like I said, I’m grateful for everything.”

He was featured in a Cyclone Fanatic “Where Are The Now” article in March that can be found here.

Nader will be presented with his Rookie of the Year trophy before the Red Claws’ Eastern Conference Finals game Sunday against Raptors 905. 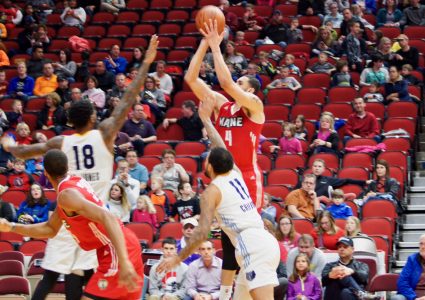 WHERE ARE THEY NOW: Abdel Nader