Matt Campbell has been vocal about how the months of February and March are critical to a player and team’s success in the fall.

For Cyclone quarterback Jacob Park, he didn’t have those months to prepare himself for his first season with Iowa State. In fact before last season, Park hadn’t played football for the two seasons prior.

“He was such an unknown,” Campbell said on Park coming into the program last season. “You had no idea who Jacob Park was or had the ability to become because you go into the season and he had two weeks of practice in terms of our offense. He literally went into the football game and played last season on sheer luck and talent alone.”

The ability Park showed at the end of last season signaled that he was ready to become Iowa State’s starting quarterback in 2017.

Over the last month of 2016, Park seized control of Iowa State’s offense and produced statistics among the best in the country. He threw for 1,322 yards, eight touchdowns and three interceptions while completing 60.5 percent of his passes during that time span.

For comparison, Oklahoma State’s Mason Rudolph threw for 1,518 yards, 11 scores and two turnovers while completing 63.9 percent of his throws over the same time.

Not only did Park produce great numbers, he was the first Iowa State quarterback to win consecutive Big 12 games since Grant Rohach in 2013.

When Park first arrived to Ames, he was in the thick of quarterback competition between him and Joel Lanning. However, this spring, he is seen as the No. 1 quarterback for the Cyclones as Lanning will be playing at whatever position Campbell and his staff need him to play.

“I think you will see us be really creative with Joel as we continue to move on and just kind of continue to develop his skill set,” Campbell said about how Iowa State will be using Lanning in 2017.

With the experience Park gained in 2016 combined with not being in the heat of a quarterback battle, one would believe that will alleviate some pressure of his shoulders.

At 6-foot-4, 205 pounds, Park possesses all the necessary tools to become a potential great signal caller. Campbell expects to see notable improvements in 2017.

“To me, quarterback is just not going out at practice and looking good and showing up on Saturday,” Campbell said. “The quarterback is the CEO of the whole deal on offense. You’ve got to be the guy that’s willing to get those guys out of bed on Saturday and bring them here to throw the football around.”

Campbell added, “I think the biggest I’ve seen from Jacob is that he has started to understand what it means to be a quarterback. I think he has grown. He still has growth to go, but I think he is making really good strides to understand that CEO mentality.” 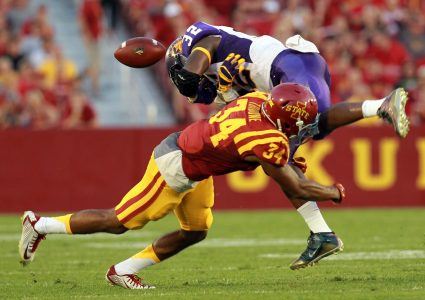 ANALYSIS: Park to ISU, what it means for the QB position