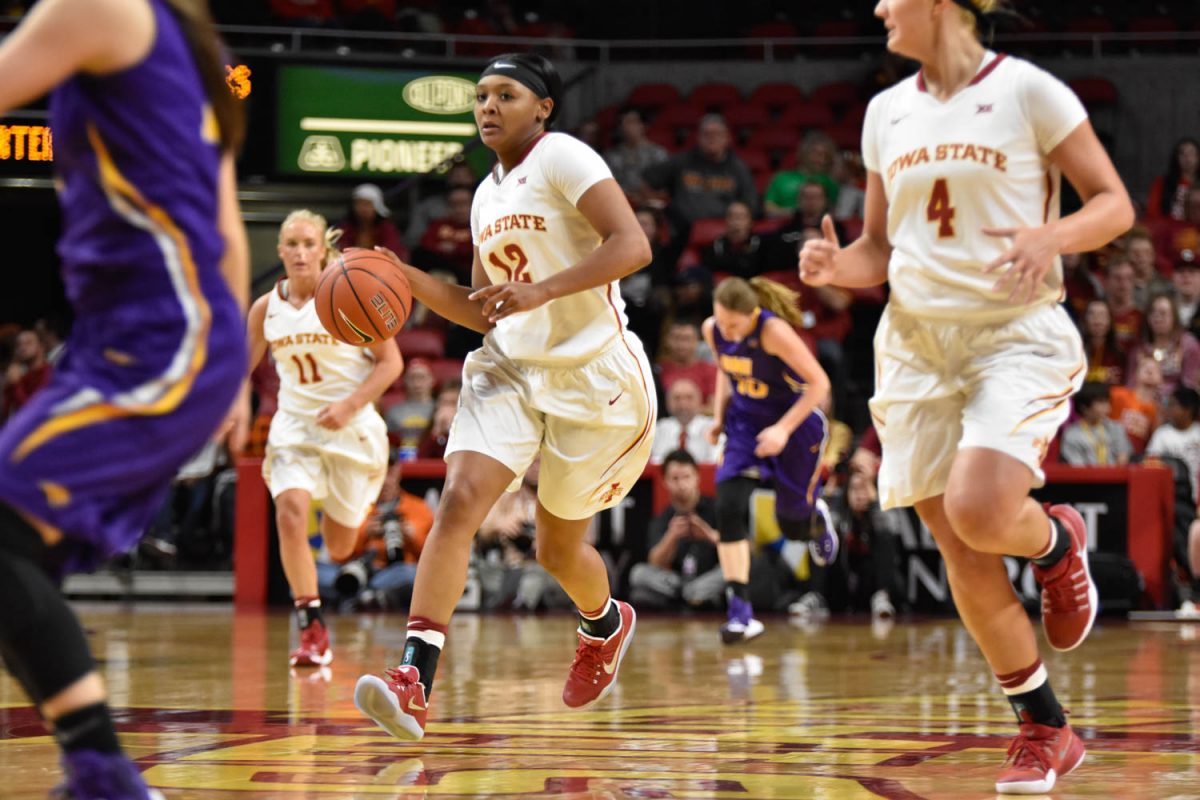 The familiar Hilton Coliseum buzzer sounded to signify a substitution with 1:54 remaining in the game. That’s when Iowa State senior Seanna Johnson walked off the floor for the final time.

On an emotional senior night, the Iowa State women’s basketball team dominated Oklahoma State, 61-48, to claim its fifth straight win to finish the regular season with an 18-11 (9-9) record.

“It was really exciting,” Johnson said on her last game at Hilton Coliseum. “It was really emotional. But to play with (her teammates) one last time, on this court, really meant a lot and getting the W meant extra for me.”

Johnson walked off the court to a deserving standing ovation. On a rare Monday home game, she dazzled the crowd in classic Seanna Johnson style.

Johnson, who is one of only two Cyclones to record 1,500-plus points and 1,000-plus rebounds in a career, scored 18 points and 14 rebounds while playing 38 out of the 40 total minutes. Not only did Johnson give the Iowa State fan base one last classic outing, she also performed well in front of her dad (who suffered a stroke last year) and the rest if her family.

“It’s kind of like, we’ve watched a lot with Seanna,” said Iowa State head coach, Bill Fennelly. “A lot of times when you’re a senior, you don’t have that moment. You’re pretty nervous. Everything is the last. Last time you walk down that ramp, last time you warm up, last time you see the band, last time for a lot of stuff. It’s nice to see her finish the way she has done it so many times. She played great.”

Five in a row

Back on Feb. 1, the Cyclones lost to the then No. 2 Baylor Bear, 83-52. Despite such a lopsided loss, Iowa State stayed the course as it won six of its last seven games, including four on the road.

Although Fennelly credits most of the success to players, he also believes that his coaching staff did the best job in country to end the regular season.

“It’s incredible how hard (Fennelly’s staff) worked,” Fennelly said. “How they motivated our players. How they stayed the course, no matter how bad it was getting. I think that was a lot of it too. I thought we played hard all year, but we played better. We were efficient, we weren’t turning the ball over, except for tonight, we were making shots. But, it has been an amazing turnaround.”

Iowa State has gone from being a possible NIT competitor to a mere lock for the NCAA Tournament.

“I’m one of those people that never feels good, everyone will laugh at me,” Fennelly said on how he felt about his team’s NCAA chances. “I had the honor to go through the mock selection a couple years ago. I know how hard that is. The committee does a great job. But, when you look at what this team has done, the wins that we have, finish fifth in the Big 12, we are 18-11 and 9-9 in Big 12, our RPI is good. All the metrics, ya. But I would say, tomorrow morning, I am going to say that I feel pretty good about our chances relative to everybody else.  But yet again, who knows. You trust the process and let it go.”

Iowa State look to continue to build its NCAA resume this Saturday at 11 a.m. against Kansas State Wildcats down in Oklahoma City during the Big 12 tournament. The Cyclones are the No. 5 seed and the Wildcats are the No. 4.

WBB: Iowa State can’t get over hump, falls to Oklahoma