AMES, Iowa – Iowa State junior Allen Lazard is one of the best wide receivers in the nation. The voting members of the award distributed to the country’s most outstanding wideout also agree, announcing today that Lazard has been named to the 2016 Biletnikoff Award Preseason Watch List.

Established in 1994, the Biletnikoff Award is named after Fred Biletnikoff, who is a member of both the pro and college football halls of fame. He was an All-America receiver at Florida State and an All-Pro for the Oakland Raiders.

The Urbandale, Iowa, native was a Second Team All-Big 12 recipient by the Associated Press in 2015 after leading the Cyclones in receptions (56), receiving yards (808) and TD catches (6). Lazard ranked fifth in the Big 12 and 59th nationally in receptions per game at 5.1. His 56 catches tied for the seventh-best season total in ISU history.

Lazard posted two 100-yard receiving games in 2015, including a career-high 147 yards vs. TCU. He’s caught a pass in all 23 career games, sharing the school record for most consecutive games with a reception. 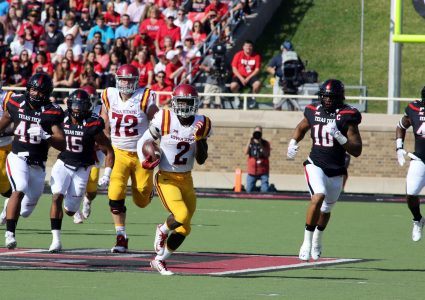