DENVER — Last Monday before Iowa State headed to Denver for the first two rounds of the NCAA Tournament, Georges Niang wasn’t exactly thrilled with his team’s final practice before a Tuesday morning flight.

It wasn’t bad, just not sharp. So after hitting the shower, Iowa State’s All-American senior walked into Steve Prohm’s office to have a little chat.

The relationship between Prohm and Fred Hoiberg’s recruits has grown so much since last summer and following Saturday’s win, it was discussed quite a bit in the locker room.

Make no mistake: This is Prohm’s team now.

“Our relationships are just so different now than they were months ago,” an emotional Prohm said. “You just need a couple of wins to validate what you are doing.”

This group of young men has faced a lot of adversity over the last 12 months.

Then they got a new coach.

Naz Mitrou-Long, who is basically a second coach on the floor, went down.

Then Jameel McKay was out of line.

“It wasn’t easy,” Niang said. “There were times when it was like, ‘dang man this is the toughest thing that we’ve had to do.’ But guys kept pushing. For moments like this, it was all worth it. We’re not done yet. We aspire to do more.”

At the right time, the Cyclones are finally clicking.

“At some points it was tough, especially in February when we struggled,” Niang said. “The biggest thing was that coach kept preaching that there is something better for us out there and that we needed to keep pushing and keep working. I think we are really hitting our stride and working hard.”

Up next ironically is a trip to Chicago for Friday’s Sweet 16 matchup with Virginia. Before that, Iowa State will arrive in the Windy City on Wednesday to watch Hoiberg and the Bulls take on the Knicks.

“I’m geeked up,” Niang said. “I’m excited to go see Coach Hoiberg if he is around and all of the other guys on the staff and hopefully catch a Bulls game.” 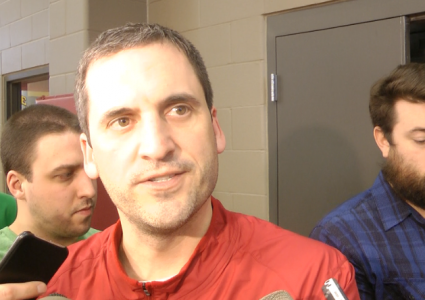