Waco, Texas — The No. 2 Baylor Bears were able to impose their will early on Saturday against Iowa State in Waco, but the Cyclones wouldn’t lie down on their way to a 45-27 loss.

The Bears scored the first 35 points of the game before Iowa State got on the board late in the second quarter. The Cyclones offense gained momentum heading into the second half when sophomore quarterback Joel Lanning replaced starter Sam Richardson, then subsequently led them on their first scoring drive.

It didn’t take long for the nation’s No. 1 offense to get rolling as quarterback Seth Russell connected with Corey Coleman for a 36-yard touchdown pass just over 1:30 into the game.

Baylor would strike quickly again in the second quarter when Russell found Linwood in the flats for a six-yard touchdown pass with 11:42 left in the first half. Devin Chafin added a two-yard touchdown run to cap the Bears’ 35-0 run.

Freshman running back Joshua Thomas put the Cyclones on the board with a three-yard touchdown run that capped Lanning’s first drive replacing Richardson. As the Iowa State offense figured things out, the defense started to find their groove as well.

The Cyclones held the nation’s top offense scoreless for nearly 30 minutes of game time between the first and second halves, and held them to 485 yards of total offense, well below their season average.

Iowa State accounted for the only scoring in the third quarter when Lanning found senior wide receiver Quenton Bundrage for a two-yard touchdown connection.

ISU’s offense also struck first in the fourth quarter when Lanning hit sophomore Jauan Wesley in the back corner of the end zone from four-yards out.

Baylor scored 10-straight-points on a 34-yard field goal by Chris Callahan and a 12-yard pass from backup quarterback Jarrett Stidham to Coleman, his 18th touchdown reception of the season, officially putting the game out of reach.

Iowa State would add one more score when Lanning hooked up with Bundrage, four catches for 69 yards and two touchdowns on the afternoon, for the second time, this one from 29-yards, with 10 seconds left in the game.

Lanning was impressive in his first game playing substantial snaps going 12-17 for 144 yards and three touchdowns, while freshman running back Mike Warren added 145 yards, his fourth 100-yard rushing output of the season, on 28 carries.

Iowa State will be back in action next week when the Texas Longhorns make the trip to Jack Trice Stadium for homecoming. 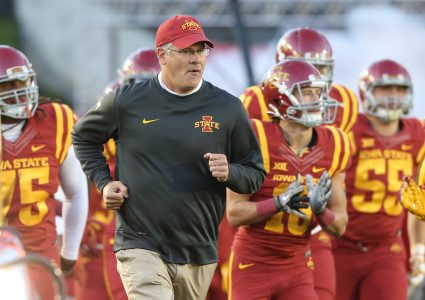