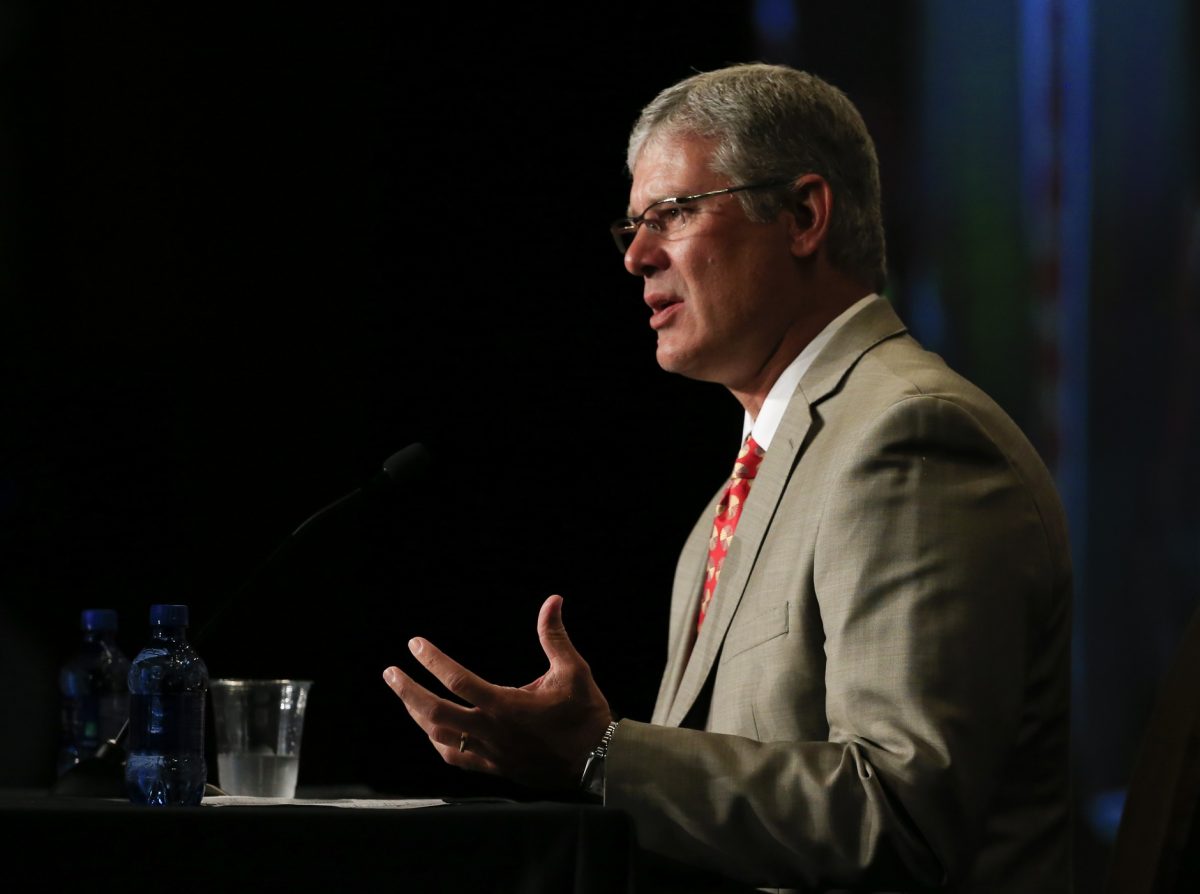 While I was a student at Iowa State a decade ago, I wrote columns for the Iowa State Daily and they were largely terrible. I made bad jokes, poked at Hawkeye fans and made a lot of reality TV references. I guess not a lot has changed. After one column applauding the efforts of Iowa State athletes staying out of trouble for the summer in 2005, I got called into the office by the faculty advisor at the paper.

He sat me down and said, “Brent, you will never make it in this business if you write positive things. People will not take you seriously unless you write with an edge of negativity. You need to be a watchdog, not an entertainer. People don’t want to read the paper for fun.”

He had somewhat of a point. Part of the news’ responsibility is to keep the public informed and keep large institutions in check. But I just couldn’t get over the idea that writers had to focus on the negative to be taken seriously. I walked out of there thinking I wasn’t cut out for the media business. I was too optimistic of a person. I’d rather make someone laugh or better yet, think; tearing someone down was not in my wheelhouse. This wasn’t for me.

Ten years later and the comment still sticks with me, especially after weeks like this one. We all know the facts. Iowa State is 1-2 in 2015 and Paul Rhoads has won just six games since the calendar flipped to 2013. In a wins and losses, what-have-you-done-for-me-lately-society, those numbers are inescapable.

There are many folks on this website’s message board and elsewhere in the media that have already determined Paul Rhoads needs to lose his job immediately for the current and past performance. They have their mind made up and Rhoads has reached the point of no return.

In some ways, it seems to be a race to bury Rhoads the fastest. Every action on the field and statement made off the field is just more ammo to add to their Rhoads-must-go arsenal. They began the season ready to pounce on the first misstep. If one can be the first to say "I told you so," that brings comfort and closure. Dismissing the current regime as helpless eases the emotional attachment and pain. That works for a portion of fans.

I just can’t roll that way.

The louder the negativity, the more lonely the optimist. And therein is my problem in this business: I have a hard time dwelling on the negative.

After all, there are still nine games left and the Cyclones have actually shown some encouraging signs.

Iowa State’s biggest downfall over the last two years has been the lack of ability to make plays in the backfield and slow down opponents’ ground game. In 2013, Iowa State allowed 220 yards per game on the ground and 5.35 yards per carry. In 2014, the numbers jumped to 246 yards and 5.7 yards per carry. It was apparent from the get-go in non-conference games in ’13 and ’14 that Iowa State was going to be a sieve against the run.

So far in 2015 against above average rushing attacks, Iowa State has raised the bar slightly, allowing 184 yards and 4.6 yards per carry. The Cyclones are not threatening to become an elite run defense by any means, but with a healthy Demond Tucker, there is a noticeable uptick in ability.

The most striking difference has been Iowa State’s propensity to apply pressure in the backfield. In 2013, Iowa State averaged five tackles for loss per game, 104th in the nation. In 2014, they averaged a similar 4.8, also 104th. In 2015, Iowa State has catapulted into the top 25 in that nation with an average of eight tackles for loss per game. Nine of those tackles have been sacks, the 15th best total in FBS. Iowa State had fifteen sacks respectively in ’12, ’13 and ’14. They are over halfway to that total already.

The revamped defense held a pretty solid Toledo offense to under 100 yards in the second half with the game in the balance. Toledo’s final four possessions before the overtime averaged a meager 2.3 yards per play.

The 3-4 scheme has provided a jumpstart to the defense and there is a discernable talent difference than the two years previous. Players like Tucker, Jhaustin Thomas, Jordan Harris, Jay Jones, Willie Harvey, Reggan Northrup and Brian Peavy have proven very capable in only their first three games as Cyclones. They are going to get better and they certainly don’t look like a group that has given up on the season or the staff.

The offense had a healthier Daniel Burton against Toledo and put up over 200 yards rushing for just the second time in the last 15 games. There were holes to run through and Mike Warren found them and also made some yards on his own. Considering the same Toledo defense gave up just 103 yards on the ground to Arkansas and has given up over 200 yards rushing three times in the last 25 games, the effort was more than acceptable.

Iowa State also showed some diversity in its passing game and ran over 90 plays for the third time since 2012. Sam Richardson has gotten mountains of criticism for shrinking in the moment, but he was the same guy that drove Iowa State into position on three separate must-score drives in the fourth quarter.  Iowa State is converting 45 percent of the time on 3rd down, in the top 25 percent of the country.

The penalties were alarming on Saturday, but I don’t think it’s a systemic problem plaguing Mark Mangino’s offense. Last year the Cyclones averaged 4.25 penalties per game, 10th best in the nation. They made some befuddling errors against Toledo, but the over generalizations about a lack of discipline in the program are unfounded.

There is huge room for growth on both sides of the ball, but there have also been noticeable steps forward. That can’t be totally dismissed.

Paul Rhoads is not in an enviable spot and the segments that want him gone won’t change their tune after reading this. But those same folks should also recognize effort and this team didn’t give up against Toledo. They fought to the bitter end. They still care.

I have no clue what’s going to transpire the rest of the season or after. The time may come where it’s best for Iowa State to move in another direction. But there are still nine games left. I’m not ready to call it quits yet. I prefer the positive.