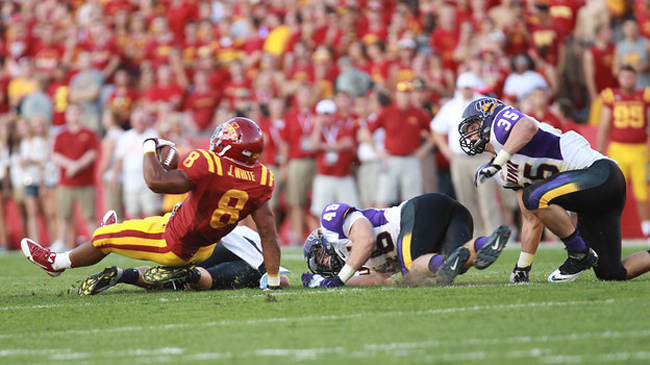 Go ahead and grab a seat old friend, we need to have an intervention. You see I care a lot about you, we have a history after all. It was your electricity with Troy Davis that introduced me to this great game. And boy did we have some great times with Darren Davis and Ennis Haywood as well. In your prime, few in the country were better. You were always old reliable. From 1996-2001, you ran for over 190 yards in a game on 30 different occasions; that was almost half of all the games over that stretch. Other teams knew you were coming at them and you still ran over them. You were a beast. Even with NFL quarterbacks like Sage and Seneca, it was your running skills and consistency that brought Iowa State to relevance. Those flashy QB’s got the credit, but you were the one who did the dirty work.

Then you got caught up in the wrong crowd. I know those memories are foggy but let me remind you.

We almost lost you during the end of the McCarney regime and during the Chizik era. You were legally dead when Robert McFarland commandeered this offense. During those two years in 2007 and 2008, you ran for over 200 yards just one time in 24 games. I know you always blamed the Wayne Bolt defense for their incompetence, but let’s face it brother, you weren’t helping the cause.

But you battled through and looked to be back on the right track when Paul Rhoads came to town. You looked like your old self during the 2009 season; you ran for over 190 yards in nine games that year and made it back to a bowl game. It is no coincidence that in six of the seven wins that season, you ran for 190 yards or more.

Just think back to two years ago during one of Iowa State’s finest offensive stretches in history. In those three straight Big 12 wins over Texas Tech, Kansas and the legendary effort against Oklahoma State, you were electric. You averaged 270 yards per game rushing in those three wins. That final overtime drive against Oklahoma State will never be forgotten; Jeff Woody pounding away behind those big uglies and running over fools. Dang that was a beautiful sight. And the running backs who orchestrated that effort are all still on campus today.

That is why it truly hurts me to tell you this. You have lost your way. You are on a one-way ticket to Miley Cryus-ville. It is really hard for me to see you in this rough of shape.

What happened to you? Through two games of the 2013 season, you are averaging just 113 yards, good for 103rd in the country. But that is just the half of it. The ballyhooed five headed running back is not a scary beast like we hoped, it is just a strange looking character with a bunch of heads. James White is leading the running backs with a total of 60 yards through two games. Nationally, there are 335 ball carriers who have more yardage than any Iowa State running back. The longest single carry by a Cyclone running back this year is 10 yards. I realize running backs haven’t had many opportunities to run but that is simply incomprehensible.  You are one of just four schools in Division one that don’t have a rushing touchdown.

The alarming problem is this is a trend. In the last four games (including last two games of 2012), none of the tailbacks have reached the 50 yard mark in a single game. Heck, Mark Weisman ran for 40 yards in one drive on Saturday.  We can keep going. Shontrelle Johnson is the last running back to clear the 100 yard barrier and that was against Tulsa in the season opener in 2012. For some historical perspective, your old pal Troy Davis ran for 200 yards or more NINE times while at Iowa State. The last running back to get 200 yards in a game? Ennis Haywood in 2001. I don’t even recognize you anymore.

I know injuries and youth have put a limp in your giddy-up, but friend, there is still some life in you.

I will be honest; some around here want to abandon you entirely and focus solely on your younger, hipper brother, the passing game. But we still need you. Under Rhoads, Iowa State is 0-10 when you fail to reach 100 yards rushing. It gets difficult I’m sure when nobody appreciates you. You get called old-fashioned and boring and people boo you a lot. But that doesn’t mean you should give up. You just need to be better, plain and simple.

I know your support system has been lacking in recent years. Remember how pissed you would get last year when the passing game would throw balls in the dirt and make your life a living hell. Well, I think the passing game is coming around; they finally have a few weapons. Now, you need to do your part. You see when you are in control, the rest of the game gets a lot easier.

The passing game functions better, your defensive brethren get a chance to rest and the clock ticks in your favor. All of us are happier when you are not banging your head against the wall.

It’s a tough world out there. Right now, everyone is against you it seems. But these Cyclone fans are a loyal group; they do care. That’s why we are having this talk. We know you can be better. Keep fighting friend, we aren’t writing you off yet.