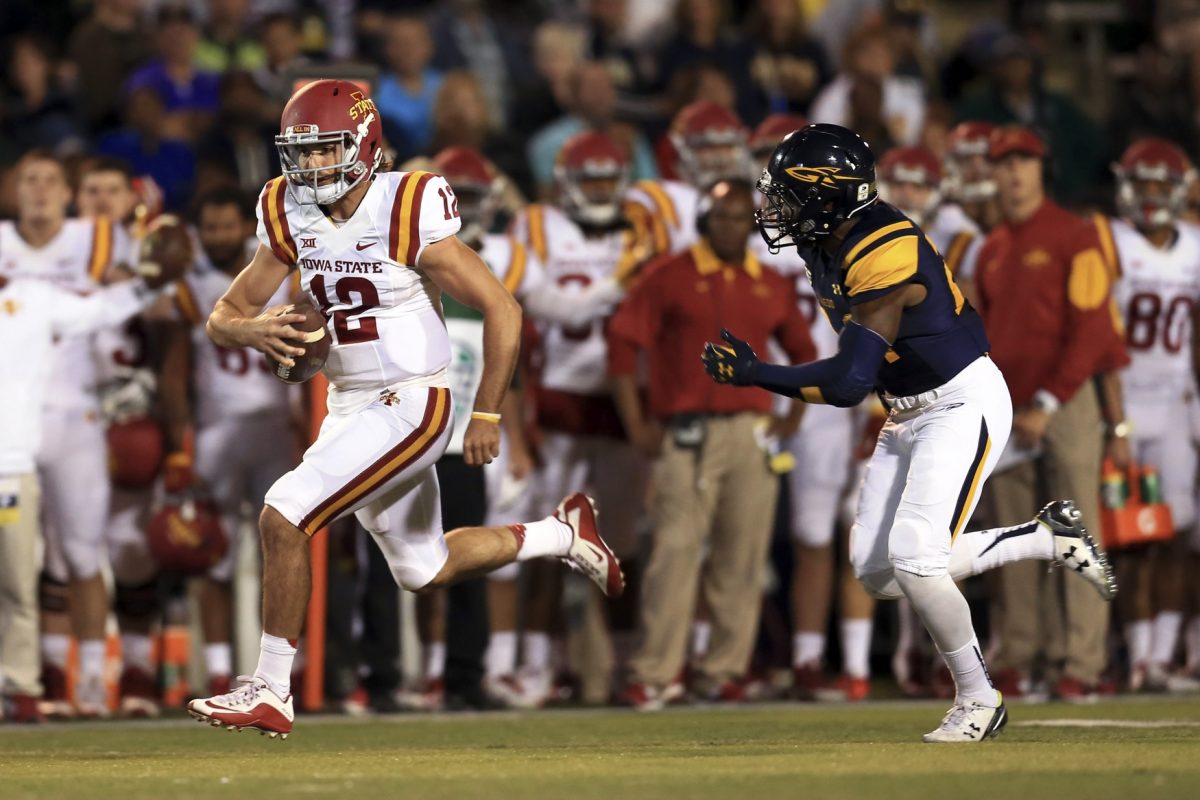 Don’t blame Wally Burnham if he gets the shakes this month.

The offensive bonanza in the Big 12 started in earnest in 2011 with RGIII winning the Heisman and Brandon Weeden and company destroying defenses league wide. The offense hasn’t slowed down since.

Baylor has averaged right at 600 yards per game in the last four years, the best mark in the nation by a wide margin. Oklahoma, Oklahoma State and Texas Tech aren’t far behind. West Virginia and TCU have added a few explosions to the already robust conference. Currently six of the 10 Big 12 teams are in the top 22 nationally in total offense.

It’s enough to wonder how Iowa State can ever compete with these offensive weirdos.

The logical feeling is Iowa State better find a way to put up a massive amount of points soon or else the season may spiral out of control, again. However, more offense, getting into shoot-outs and throwing the ball 50 times per game isn’t necessarily the secret to staying competitive.

Trivia question: Who leads the Big 12 in conference victories in the last four years?

Believe it or not, Kansas State has the most wins in Big 12 conference games over that time-span with 27. They have had a winning record in conference play each of those four years, something only the Wildcats and Oklahoma have done. Yet, in that stretch the Wildcats have never averaged more than 421 yards per game. Here is the Wildcats rank each year in the Big 12 in total offense:

For reference, Iowa State is currently averaging 404 yards per game through four games. While it is clear Iowa State needs to increase its scoring production level on offense, K-State has proven time and again that you don’t need to get in air raid 50+ point battles with the alien offenses in the Big 12 to win.

I often refer to Bill Snyder as the "vampire" because he’s looked the same for 30 years and he sucks the life out of opponents. He has figured out the best way to negate the great Big 12 offenses is to not let them on the field to begin with. It’s brilliant in its simplicity.

K-State has been in the top two in the league’s time of possession stat each of those four years. They have run the fewest plays in conference games each year. (Yes, they have run less plays than Kansas and Iowa State for four straight years.) While the top offenses of the league are running tempo at breakneck speeds and scoring at obscene rates, K-State is content to leisurely stroll their way to the end-zone and keep the other offense out of rhythm on the sideline. It works.

Let’s compare the Big 12’s tortoise and the hare. Baylor averaged 90 plays per game in 2014, K-State averaged 67 per game. In 2013, Baylor ran 85 plays per game, K-State 63. When the two teams have met over the last two years, K-State controlled tempo and held Baylor 20 plays below their average. And not surprisingly, the Bears have been held under 40 points four times in their last 30 contests; two of those were to K-State.

Aesop’s Fable has come to modern college football life. Slow and steady can still compete in the crazy Big 12 race.

So what’s the key? The Wildcats rarely commit penalties and they are monsters on third down. They have converted over 48 percent on third down the last three seasons; in the top 25 nationally each year. This leads to long, sustained drives where they can vampire the clock. The Wildcats haven’t had a dominant rushing game by any means, but the ground game is good enough to get three and four yards a carry, leading to a bunch of third and short situations. They convert, keep the other offense off the field and choke out any chance for the blitzkrieg’s to establish.

The key for Iowa State isn’t to try and keep up, that’s a recipe for disaster. The Cyclones need to run the ball, control the clock, keep their defense off the field and limit possessions.

The clock does not care about your point total.

Iowa State has shown ability over the last two games to run the ball. In order for them to compete over the next three weeks against these offensive juggernauts, the run game is the most important key. Positive yards on first down allow more options on second and third. And they should have some success on the ground. Texas Tech is dead last in the power 5 conferences in rushing yardage allowed at 277 yards per game. TCU is very average, giving up 177 on the ground and Baylor is a pretty pedestrian 144 yards per game.

I believe the Cyclones have the ability to do this. They need to keep the mistakes at a minimum and capitalize when they do get the chance. Field-goals won’t cut it. But they don’t need to be Baylor, they need to aim for K-State.

If Iowa State gets in shoot-outs over the next three games, they won’t survive. You can’t out-gun a gunslinger. Take a page from the vampire and suck the life out of clock. Slow and steady.