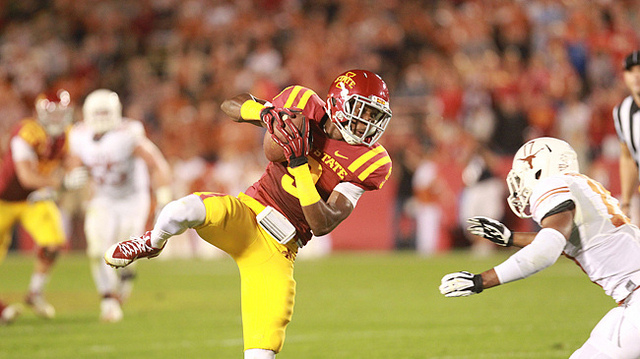 Family. Food. Football. What is not to love about Thanksgiving? I trust that you all wore your stretchy pants to work today right?

On this Cyber Monday, I have a confession to make.

On Saturday, pretty much every person (minus a few of course, don’t want to leave anyone out) in the world who I love was at my home in Bondurant to take in Iowa State’s final game of 2013. My folks and sister (with her husband and three children) made the trip north from southwest Iowa. My in-laws traveled down I-35 from Ames and of course, my best pal Dierks (8-month old Golden Retriever) along with his best pal Abby (2-year old English Springer Spaniel that belongs to my in-laws) were there to entertain the masses as well.

The day started off with a bang. I woke up early to get my truck washed, hang some extra Christmas lights on the house, and get a few other things done before the 11:00 a.m. games kicked off.

Michigan and Ohio State put on an all-time classic folks. That Brady Hoke guy has colossal marbles. Regardless of how the 2-point conversion played out, props to him on “playing to win the game” (in my best Herm Edwards voice).

Then, 3 o’clock rolled around. Our house was wild, boisterous and jovial when the Cyclones kicked off against the fighting Dana Holgerson’s. After the first quarter, the whole, “win or lose, we still booze motto” had kicked into full effect (minus myself who was downing H2O due to Cyclone Radio Network duties) after the game. The wine was flowing. I think I even so my brother-in-law smash an empty can of Busch Light on his forhead (I’m kidding – this was a fairly tame group).

During that first half, the Cyclones were like my golf game – bad but did just enough good to keep me coming back. The third quarter equaled much of the same. By this the halfway point of the third period, only the men were still tuned into the game. The women had since gone upstairs to shop online and complain about their husbands.

When Grant Rohach led Iowa State on a 99-yard touchdown drive late in the third though, the Cyclones gave everybody hope. But of course, West Virginia quickly answered via a 76-yard touchdown pass. Iowa State’s defense had more holes in that play than a crappy piece of Swiss cheese.

That is when I made the decision to head to the Clear Channel studios in downtown Des Moines to begin working on my story for this website and prepare for the final installment of Cyclone Reaction in 2013.

But by the time I had gotten out of Bondurant, the tone had changed (I was happily hanging out with my pals John Walters, Eric Heft and Ben Bruns on the radio).

Kirby Van Der Kamp’s 21-yard fake punt run gave Iowa State a puncher’s chance. Rohach to Bundrage, 62-yards, BOOM. Jacques Washington flexed his muscles for the defense. By the time I had gotten to the studio, Iowa State was setting up for a 31-yard Cole Netten field goal with 4:21 to play. After another forced turnover, Joe Montana, I mean Grant Rohach, had led the Cyclones down the field and sent this puppy into overtime.

From there, I got to tune in like the rest of you and well, holy crap, that was awesome.

To throw salt in a very fresh wound, I found out about the unbelievable finish to the Iron Bowl from Eric Helf while traveling west on I-235.

The moral of the story: As Jimmy V once said, “Don’t give up. Don’t ever give up.”

On Saturday, I had given up on the Cyclones. Paul Rhoads’ tenacious group most definitely proved this hack-blogger wrong.

Well-done gentlemen. I was very happy to eat crow.

*** If you missed it, I am not ignoring Paul Rhoads’ big announcement from Sunday. Here are in names I came up with last night that could potentially be Iowa State’s next offensive coordinator.

*** One extra thought on the offensive coordinator search – I have had quite a few people bring the name Austin Flynn. Flynn, who played quarterback/wide receiver at Iowa State from 2002-2005, is currently working as the offensive coordinator at Grand View and doing some amazing things. Honestly, I should have included him on yesterday’s list. I thought about it. He was on my initial list that I came up with but the reason I left him off was because of experience and nothing more. Going from Grand View to being an offensive coordinator in the Big 12 is a huge step. I’m of the feeling that Rhoads almost needs a second head coach in that position but again, I should have thrown Flynn, who has an incredibly bright future, on the list initially.

*** Yes, Iowa State basketball does play tonight. The Auburn Tigers will be in town for the Big 12-SEC Challenge, a 6 p.m. tip on ESPNU. Vegas has Iowa State tabbed as a 17.5 point favorite. KenPom.com has Iowa State winning the game by 20. Auburn enters tonight’s game with a 4-1 record, with its lone loss coming to Northwestern State on Nov. 15. Its best win came on Nov. 23, 75-67 over Murray State.

As always, you an expect full coverage on CycloneFanatic.com after tonight’s game.