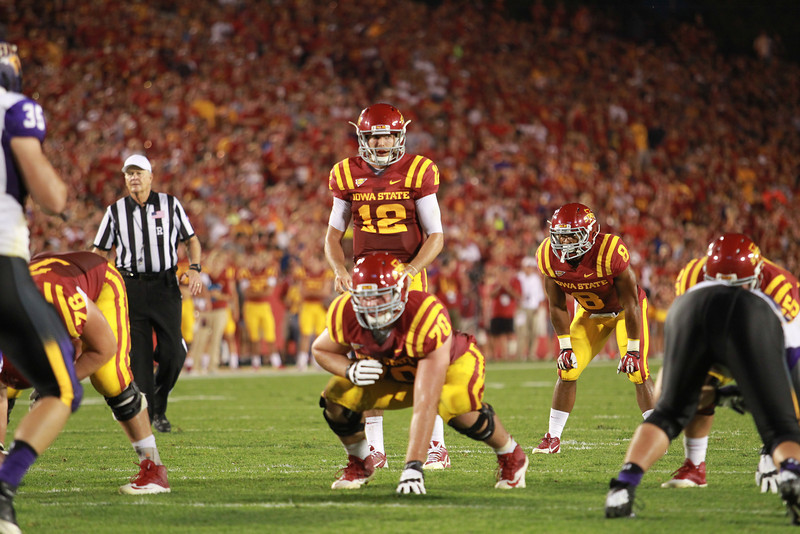 That nauseating cliché has been brutally accurate when describing far too many Iowa State football games over the last season and a half. That again was the case on Saturday as a beat up Iowa State football team lost to 20th ranked Texas Tech by a 42-35 final in Lubbock.

After skimming over our message board and co-hosting the Cyclone Radio Network’s postgame show (where I took your calls), I feel like I have a decent gauge on what a lot of Iowa State’s fan base is thinking/questioning after this one. I’ll attempt to get to all of those points in a different looking postgame column, as the Cyclones have dropped to 1-4 on the season.

Why don’t the coaches put in Grant Rohach at quarterback?

Well, let’s be fair before picking Sam Richardson apart. Iowa State’s offensive line arguably had its worst performance of the season (which is saying something) against the best competition it has seen all season in Texas Tech.

Having said that, Richardson’s 15-for-38 performance (38 percent completion percentage) was hard to watch at points in this game. In fact, there was a time in the second half where he threw 11 incomplete passes in a row.

Let me make something very clear. It wasn’t all on No. 12. Any semi-educated fan out there knows this too. The line didn’t do its job for the majority of the game. Iowa State’s running game took a major step back from what we’ve seen the last two weeks (the Cyclones averaged 3.7 yards per carry for 143 yards on the ground vs. Tech). The play-calling looked more like what we saw in the first two games compared to the last two. As former Iowa State wide receiver Jack Whitver pointed out on the Cyclone Radio Network’s postgame show, there were multiple route-running errors that he saw from receivers on the day (two by Quenton Bundrage). Albert Gary dropped what would have been a first down reception in the first half. The lack of a consistent running game put Richardson in a 3rd and long (and other bad positions) time and time again. There is plenty of blame to go around (as has been the case with Iowa State’s offense for years now).

It’s an offensive issue. Not a quarterback, or running back, or wide receiver or offensive line issue. They all work together.

But in the year 2013, successful quarterbacks need to be more than just game managers. That is the case in the NFL too. In the unpredictable Big 12 especially, there’s no doubt that this is a fact.

Unlike what the issue was last year with Iowa State’s quarterbacks, Richardson actually takes care of the football (he’s only thrown four interceptions all season). So that’s a plus. But injured or not, even with the protection issues, at some point he needs to start making some of those easier plays that Iowa State has struggled converting on.

Back to the original question: Why not play Grant Rohach?

All I will say to that is this: Being a college football coach is not easy. Paul Rhoads and Courtney Messingham make a lot of money and as a result, they are constantly under pressure. There isn’t a man in Iowa State’s program who has faced more scrutiny from this 1-4 start than Messingham.

If he thinks that Rohach gives this team a better chance to win, trust me, Rohach would be out there. Jobs are on the line here. It doesn’t make any sense (for Messingham or any decision-maker in the program) to keep playing Richardson if they don’t think that he is the guy who gives them the best chance to win football games. Plus, this staff has already proven that it would play a newcomer over a veteran based off of Aaron Wimberly’s emergence at the running back position. That’s where I stand on that issue at least.

But the defense gave up 666 yards…

Texas Tech ran 101 plays to Iowa State’s 78 yet the time of possession statistic was almost dead even. This was an offensive issue. Iowa State 18 first downs (compared to Texas Tech’s 36) simply didn’t cut the mustard.

Granted, the defense wasn’t perfect. Of course it wasn’t. But without the turnovers (credit the special teams too), this one actually could have gotten very ugly.

So what’s the problem on offense?

How much time do you have?

Well, a depleted offensive line is where you have to start. Tom Farniok played but still isn’t close to 100 percent. Neither is Jamison Lalk. Tackle Jacob Gannon didn’t play much due to a knee injury either. There’s Richardson’s lingering injury and the hero from the last two weeks, running back Aaron Wimberly, didn’t play for the majority of the second half due to a minor back tweak (Wimberly said after the game that he would play next week at Baylor).

My honest opinion though is that Texas Tech’s defense is just a lot better than Tulsa’s and Texas’ were. The Red Raiders utterly dominated Iowa State up front in this one. As a result,  Iowa State’s offensive production (and numbers) suffered.

I also think that Richardson’s health took a step back compared to the Texas game. Sam had a nice 38-yard run but other than that, he ran the ball 10 times for 11 yards. When healthy, that’s a very un-Sam Richardson-like stat-line.

What happened at the end of the half?

That, I did not understand. Iowa State got some junk yardage off of a couple of runs (in which they clearly were not expecting based off of the conservative play-calling) and instead of taking one or two shots (as Iowa State was approaching midfield with two timeouts), the Cyclones sat on the football and took a 21-21 tie game into the half. That, I did not understand.

I thought that the Voice of the Cyclones John Walters summed Saturday up well with this tweet:

ISU without top corner, Wimberly for much of game and a completely banged up O-Line & QB loses by 7 on #20’s home field. Showed heart today.

Walters is spot on with his statement about “heart.” This group clearly has plenty of that.

Jarvis West – His 95-yard touchdown in the first quarter was Iowa State’s first true kickoff return for a score since 1994. West was also impressive in the punt return game. He caught three passes for 36 yards.

Red-zone – Iowa State scored four touchdowns (4-for-4) and is now 17-for-17 on the season when having the football inside the 20.

No quit – This team might be 1-4, but they have always made things interesting this season. With the current state of the Big 12, there’s no reason to cash out on the rest of the season despite the slow start.

3rd quarter – One of the most frustrating period’s in recent Iowa State football history. The Cyclones either turned the ball over on downs (once) or punted on their first seven possessions of the second half. The thing was though; Iowa State’s defense stepped up during this span, forcing Texas Tech to punt on four of its first five second half possessions.  The offense just couldn’t ever capitalize.

Next week – It wasn’t pretty and by all means, Wally Burnham will have a fair amount of quality game tape to dissect, but Baylor defeated Kansas State 35-25 on Saturday afternoon. The Bears are still unbeaten and Iowa State will travel to Waco next Saturday for a 6 p.m. kick.