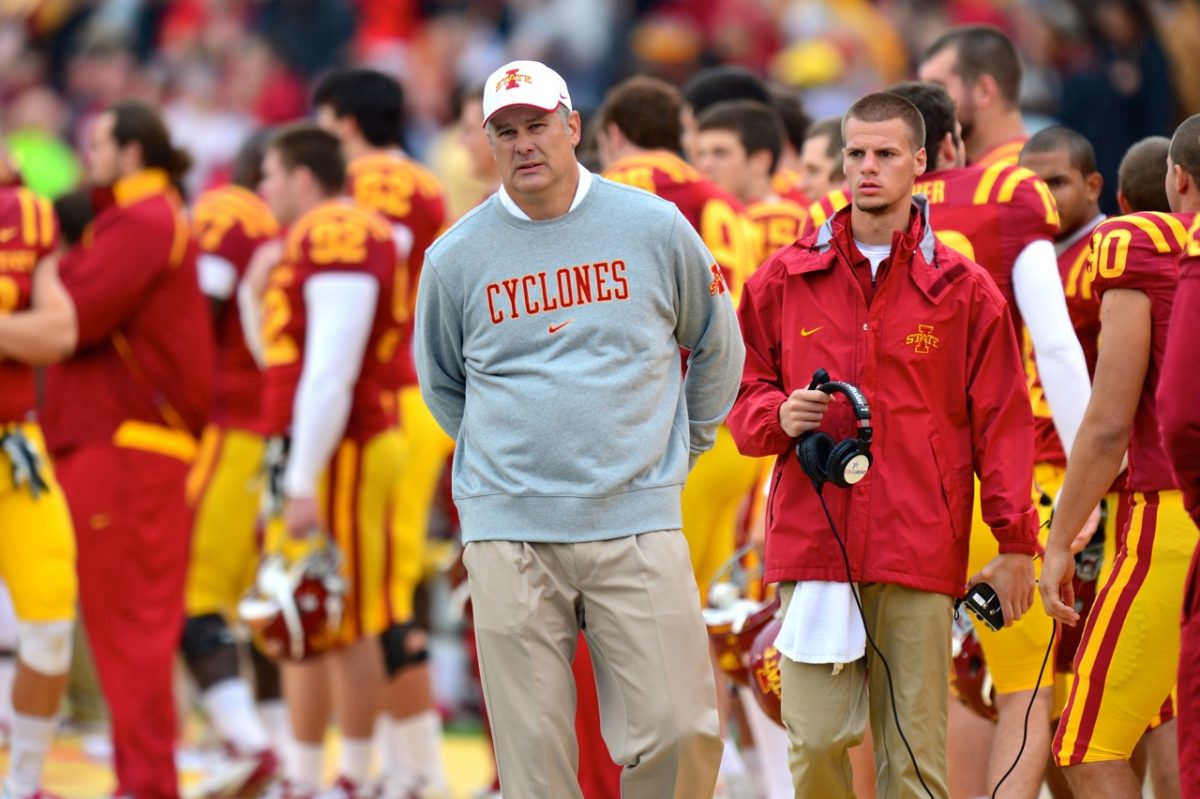 In front of a dense purple crowd on a beautiful Saturday afternoon in the Sunflower State, Paul Rhoads’ Iowa State football team came out of the gates as sharp as a tack on its first possession in a match-up with Kansas State. Without running back Aaron Wimberly in the lineup, Iowa State collected three first down in its first three plays from scrimmage. The Cyclones had oomph. The Cyclones showed burst. A patchwork offensive line got push while Sam Richardson made a few throws.

Perhaps a new leaf was about to be turned over, no?

On that same drive, Daniel Burton was then called for a false start. Richardson then missed a wide-open Justin Coleman. The Cyclones punted. That’s when Iowa State’s defense got carved like a jack-o-lantern and the Fighting Bill Snyder’s routed Iowa State by a 41-7 final.

Above is only an example of one spec of the 2013 season but you don’t get to 1-7 without multiple things being wrong. To simplify Saturday, even when Iowa State did something well, the Cyclones followed it up by shooting themselves in the foot.

Iowa State has been outscored 170-41 in its last three games.

Finding positives right now is not easy, but here is my best shot.

Nigel Tribune – This true freshman cornerback is going to be really, really good. The rookie took a handful of lumps early this season but should be better for them the next three years. Even with the losses, I think that most rational fans can objectively look at No. 34 and be excited about his future.

DeVondrick Nealy – Filling in for Wimberly, the sophomore scored Iowa State’s only touchdown of the day via 10-yard fourth quarter run. Nealy averaged 4.4 yards per carry and tallied 53 yards in the loss. He has scored two touchdowns in the last two weeks.

TCU is next – The Horned Frogs lost to West Virginia on Saturday and are now 1-5 in Big 12 play. Not that Iowa State should feel confident about next week or anything, but it’s better than seeing Oklahoma on the docket seven days from now.

Offense – Staring with the quarterbacks, Sam Richardson missed some easy throws in the first half – incredibly easy ones – ones that you absolutely have to make at this level. After throwing a second quarter interception, he was yanked for redshirt freshman Grant Rohach, who went 11-for-24 on the day with 88 yards and two interceptions.

While the position group is guaranteed to be a hot topic all week long leading up to TCU, quarterbacks are only part of the problem here though. This starts at the top. An offensive line (that notably lost another starter on Saturday in Daniel Burton) has to protect. Run blocking is self-explanatory.

Iowa State’s best receiver (Quenton Bundrage) caught one pass in the loss. He was not targeted once in the first half. How does that happen?

Secondary – I’ve made the following observation about Iowa State’s defense all season long but this really stood out on Saturday. It’s that Iowa State’s defensive backs, even true freshman Nigel Tribune, are nearly always in the right spot at the right time when it comes to coverage. It is that whole executing and making a play on the ball aspect of the game that has given this group troubles all season long. The Cyclones failed to capitalize on a handful of opportunities to turn the Wildcats over again on Saturday and while other things obviously went wrong, a turnover or two could have been enough to tilt momentum and get Iowa State in the game.

Negative momentum – After suffering three blowout losses in a row, how much more can this group take? That’s a fair question as Homecoming week approaches in Ames.

To throw salt in some already very fresh wounds, Paul Rhoads announced after the game that freshman linebacker Luke Knott is done for the season. Iowa State’s only offensive lineman that has started every game this season, Daniel Burton, left Saturday’s loss with an ankle injury too.

Yes, these are tough times indeed.