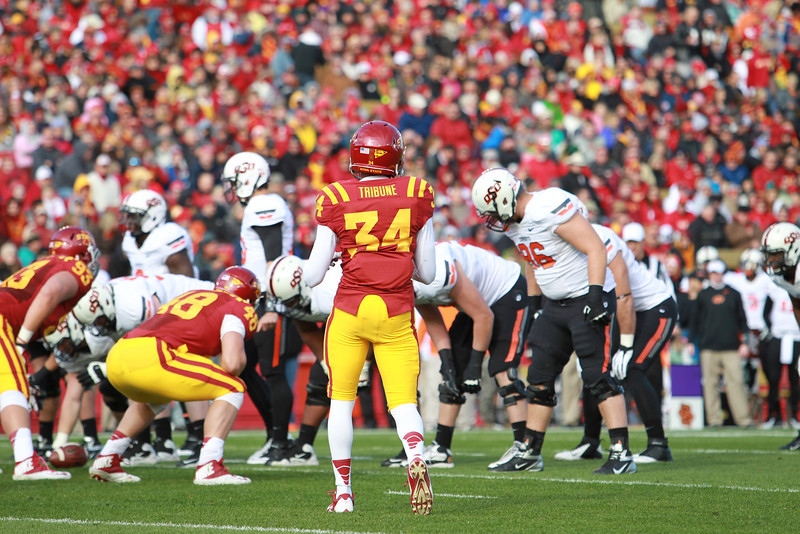 Opposing quarterbacks have picked on him constantly. He’s been mocked on message boards and Twitter. His team is 1-6. Through it all though, Iowa State’s true freshman cornerback Nigel Tribune has stayed motivated, gotten better, and impressed his head coach and teammates along the way.

In a year where there hasn’t been a whole lot to get excited about, this kid’s future is certainly one of those things.

And by all means, he should. Though he played sparingly prior to it, Tribune’s first real coming out party to the college football world was in a 31-30 Big 12 season opening "loss" to Texas on Oct. 3. Tribune was forced to enter the game in the third quarter for Iowa State’s top cover-man, Jansen Watson, who tweaked his ankle and needed a break. Texas’ veteran quarterback Case McCoy then turned into a shark sensing blood in the water when he saw the naive true freshman enter the game.

You all saw what happened from there.

But as Tribune has stuck with his ‘confident but not cocky’ approach to one of the toughest positions in the game to play, Rhoads stuck with the true freshman against the 2nd (Baylor), 3rd (Texas Tech) and 36th (Oklahoma State) ranked pass offenses in college football the past three weeks. Tribune’s efforts were finally rewarded with his first career interception in last Saturday’s 58-27 loss to Oklahoma State.

“There were a couple of things that he was exposing himself to that a smart quarterback is going to pick up on him,” Rhoads said. “We addressed that immediately and because of that, he becomes a better player. He has got the ability and sometimes this is how it works – the snowball effect – to turn an interception into three or five in the next five games. He is capable of doing that. I’d love to see it happen.”

One thing is for sure when it comes to Nigel Tribune’s future as an Iowa State Cyclone. After year one of his career, he will have no fear going forward. That’s because he’s never feared a thing from the start.

“Most of the time you see young guys get called up and they are scared. They don’t want to make mistakes,” junior defensive tackle Brandon Jensen said. “With him, you never really see that. He’s always sound. He’s with film. He’s never cocky or anything like that."

Why play Tribune as a true freshman?

With a handful of cornerbacks already in the program (Kenneth Lynn, Sam E. Richardson, Matthew Thomas), why not give Tribune that extra year to grow and allow him to redshirt like everybody else in Iowa State’s 2013 class?

“It has not been as much of a desire to keep true freshmen true freshmen and save that year,” Rhoads said. “Is there a need or you don’t have a choice?”

Back in the day with Jake Knott, A.J. Klein, Jeremy Reeves and Josh Lenz, Rhoads did not have a choice.

“Two, is the guy too good that you can’t afford to keep him on the bench? We will continue on with that same philosophy as we go forward,” Rhoads said.

This is where Tribune fits in. At 5-foot-10, 179 pounds, his body is already larger than that of Jansen Watson, who just last week Rhoads referred to as a future NFL cornerback.

Rumblings of Tribune being one of Iowa State’s top cornerbacks during fall camp turned into reality after the Cyclones’ season opening losing to UNI. That’s when the redshirt was pulled and Tribune has been learning on the job ever sense.

“He stepped in when they asked him to step in. That’s a big deal because that first week he didn’t think he would be playing,” Jensen said. “I’ve seen great confidence with him. I know that he’s in the film room a lot studying with coaches and a lot of the upper-classmen. They are really helping him. I just like the way that he is attacking every week. He wants to get better.”

He’s taking licks now, but Tribune should be better for it in years to come. He’s already come a long, long way in half of his freshman season.

“When I met with him after practice yesterday (Sunday) and he and I watched about a dozen snaps of film, that was the challenge that I gave him in the next five weeks was to become even smarter."

“He transitions really well and changes directions from one movement to another. He quite honestly is capable of transitioning better than he has in games at times. They threw an incomplete pass on our sideline that his coverage was not good enough. Had it been, he could have picked it and ended up in the end-zone. Him playing at even a higher level with better knee bend and better urgency is going to create some of those plays that I’m talking about.” 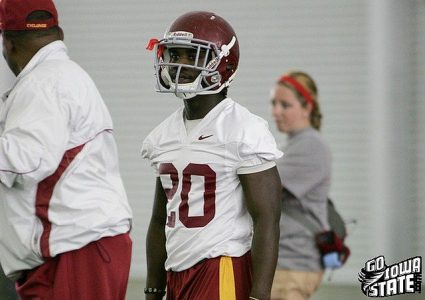