There is some scary, supernatural stuff happening in the Bergstrom Football Complex. Evil spirits have infiltrated the building. Since the Cyclone football team officially moved into the new football complex in mid-November of last season, Iowa State is winless at Jack Trice Stadium.

First, let’s entertain a history lesson. Jack Trice Stadium was built near the Squaw Creek river, a tributary of the South Skunk river. The Sauk and Meskawki tribes originally referred to the South Skunk river as "Shecaqua," which in their language meant "strong or obnoxious smell." The waters once featured hoards of wild onions, thus the unpleasant aroma. But it may have been more than just onions which led to the obnoxious designation from the tribes. Amongst the hydrogen, oxygen and onions undoubtedly lived another malicious force: evil demons.

Fast forward to 2010; during a four day stretch in August that year, 14 inches of rain pounded Story County. Squaw Creek was sent spiraling out of its banks carrying with it evil intentions. The water coalesced around Jack Trice Stadium and Hilton Coliseum causing millions of dollars in damage. Luckily, thanks to some heady planning and sand-bag efforts, Jack Trice Stadium and the Jacobson Building were largely spared. However, the water pervaded the soil surrounding the area, concentrating in the soil that was soon to be christened as the new home of the Bergstrom Football Complex.

Construction of the $20.6 million facility began in the fall of 2011, nearly a year after the flood. All was thought to be well, but little did anyone realize during construction that the Squaw Creek spirits were conspiring beneath the surface to cause harm.

This was not a new phenomenon; the Squaw Creek demons had done damage before. In 1993, a record flood decimated the same Iowa State Center area. Hilton Coliseum was absolutely devastated; the floor was wiped out, and the bowels of the building had to be completely rebuilt. The Iowa State basketball team had sky-high expectations entering the 1993-1994 season. They had a returning core of juniors Fred Hoiberg, Loren Meyer and Julius Michalik. The Cyclones started 6-0 that year, but the Squaw Creek evil-doers got a hold of them eventually.

Iowa State held a 22 game home winning streak when the calendar turned to 1994. But they were stunned in their Big 8 home opener, losing  78-72 to Eric Piatkowski and unranked Nebraska. They lost their next home outing to unranked Oklahoma 93-90. Two days later, star center Loren Meyer, who had been averaging a ridiculous 22 points and nine rebounds, was driving around Des Moines at 4:30 a.m. when his car was struck by a train. Yes, a train. Meyer suffered a broken collar-bone and the season unraveled. Evil was at work. Iowa State finished the year 4-10 in conference; it was the only season Fred Hoiberg missed the NCAA Tournament. Hoiberg had lost just one home game prior to the 1993 season; he lost four games the season after the flood. Coincidence? I think not.

Johnny Orr retired after the year ended. The spirits had their victim.

Twenty years later and they are back at it. The spirits had festered in the soil following the 2010 flood, but they escaped during the football facility construction. The home football losing streak now sits at six games with the last win coming October 27, 2012 against Baylor. It is the longest home losing streak since 1994. And some of the events surrounding the losing streak are clearly surreal.

The rash of injuries has reached unfathomable proportions. After spring practice, the starting offensive line looked this: Jacob Gannon, Shaban Dika, Tom Farniok, Ethan Tuftee, Kyle Lichtenberg. Dika’s career is over after suffering a summer knee injury. Tuftee is a warrior, but his knees are also spent. Lichtenberg needs Tommy John surgery and is out for an extended amount of time. Farniok missed several games with an MCL injury and Gannon suffered the same plight. Bob Graham, who entered the year as a second string guard, is missing the year with a back injury. Jamison Lalk missed time as well. So, if you are scoring at home, seven of the 10 men on the post-spring offensive line two deep have missed substantial time.

Not to mention other offensive injuries to starters Sam Richardson, Aaron Wimberly, Justin Coleman, Ernst Brun, E.J. Bibbs, Ben Boesen and now Jarvis West (who will be out for several games.) Over half of the depth chart has been injured. That’s creepy.

Not even a Wizard can slow down the malicious Squaw Creek demons. Wally "The Wizard" Burnham entered the 2013 season with a remarkable 20 game streak of holding opponents to 36 points or less in regulation. The streak reached 24 games before being obliterated by the last three opponents. Tech, Baylor and Oklahoma State have combined to score 171 points: the worst three game stretch since 1997. Teams are gashing Iowa State with the run. The Cyclones are allowing 219 yards rushing per game: only Indiana has a worse run defense in the BCS conferences. Run defense is the wooden stake to the heart of a vampire, if it doesn’t exist all hell breaks loose.

The demons aren’t satisfied with merely infiltrating those in the Cardinal and Gold; they have also sullied the minds of the officials.

With eight minutes remaining in the game against Oklahoma State, the Cowboys were called for a personal foul penalty that gave Iowa State a first down. It was the first time all season the Cyclones earned a first down via penalty. There had not been a facemask, hold, pass interference, late hit, hands to the face or any other automatic first down penalty on opponents for an entire 27 quarters. The only explanation for that is supernatural. Most Big 12 schools have had 15-25 first downs via penalty entering the weekend; Iowa State had ZERO. Iowa State got called for five pass interference penalties against Texas, there has yet to be one pass interference called against any Cyclone opponent.

Of course the Texas game ended in controversial fashion; it is no mystery that the Jeremiah George strip fumble was ruled by the line judge in the northwest part of the stadium, directly in line with the newly created tunnel unearthed from the conspiring Squaw Creek spirit soil.

All of these elements add up to a clear and direct infiltration of a heinous presence. A solution to rid the area of this malicious force is necessary. The new football facility is a beautiful and efficient structure and tearing it down is probably off-limits. So the choice is clear; on this Halloween week an exorcism is needed.

The basketball team hired Tim Floyd from New Orleans who worked his voodoo magic to rid Hilton of the evil in 1994. Not a coincidence Iowa State went to the Big Easy to find him; that city is crawling with the supernatural. Iowa State made three straight NCAA Tournaments under Floyd. Unfortunately, Floyd is busy with his UTEP basketball team, so he is not an option this time around.

That said, I believe the spirits can be bribed and exorcised with gold. It is thus my recommendation that Iowa State collect any and all remaining commemorative Gene Chizik coins and deposit them into Squaw Creek immediately. The only way to squelch evil is to fight it with bigger evil. It will quiet the malfeasance and return the spirits to dormancy.

Some drastic action is needed, the Iowa State fans continue to show up in droves despite the six game home losing  streak. They have witnessed enough horror and deserve a reward.

Some good is needed in Ames…and maybe a pass interference call or two. 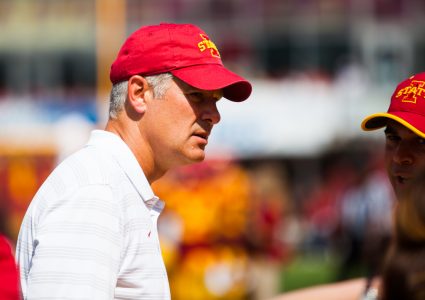