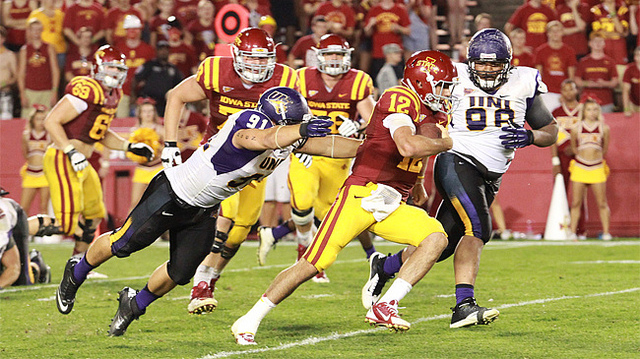 AMES — Since spring football began last April, Paul Rhoads and Courtney Messingham have been very consistent on their position that Sam Richardson is their quarterback.

But what if Sam Richardson can’t be Sam Richardson, meaning that Iowa State’s sophomore signal caller isn’t able to effectively use his legs? Well, that would be a major issue, especially against what has been a lackluster Tulsa defense so far this season.

“I go back to the first play of the game in the Iowa game,” Rhoads explained. “With a healthy quarterback, that easily could have been make one guy miss and a touchdown on the very first offensive play. At the very minimum, it is an eight, 10 or 12-yard gain.”

But Richardson was a shade of himself against the Hawkeyes thanks to an ankle injury that he suffered in the season-opener vs. UNI. As Richardson admitted on Sunday night, he has been fighting a groin injury as well.

The ankle is the key though.

“It is a lingering type of ankle injury that may bother him throughout the course of the season,” Rhoads said. “You start to adjust and deal with it as he is but certainly he was better in yesterday’s practice than even last week.”

So that news is good for the Cyclones. Richardson is feeling better and according to Rhoads, looks as sharp as he has been since before the start of the season.

But as Rhoads put it, with what his program wants to do on offense, the quarterback has to be able to run.

“It is very much a component of our offense in three different ways,” Rhoads said. “It’s an option run-read for the quarterback and the running backs. It is a designed run play for our offense. And it is the adlib of a scramble.”

The adlib of a scramble example is an area where Tulsa’s 88th ranked defense has been especially weak this season.

“If that is out of our offense, it’s hard to be fully effective as we go forward,” Rhoads said. “As compared to an offense where the quarterback is going to sit in a well-protected pocket and either just hand it off or throw his short game or down the field passing game with out the concern for the other piece. That’s not us.”

So what if, say, in the second quarter on Thursday night, Richardson’s ankle gets hit and he’s back to being the hobbled man who played against Iowa. Is redshirst freshman Grant Rohach ready to go?

Do not misunderstand this.

There isn’t a quarterback controversy going on in Ames. Even after an 0-2 start, Sam Richardson is still clearly the choice. But he has to be able to move. If he cannot do that on Thursday night in Tulsa, Okla., Rhoads could have a tough decision to make.

“It will be a decision that we will utilize moving forward that if that can’t be a viable part of our offense with him in there then we will look to adjust,” Rhoads said.

“He is like having another quarterback out there for us.”

*** Iowa State has had 15 players record the first starts of their career in the first two games of this season.

*** Thursday will mark Iowa State’s first road trip of the season. According to Rhoads, that might not be a horrible thing for an 0-2 football team.

“A lot of times it is good,” Rhoads said. “We will be looking forward to taking a business trip on the road and getting in that kind of atmosphere where you are sort of more locked arms and having people in your locker room and the parents and great fans that follow you on the road. Sometimes it is a very positive thing and we will try to generate that.”

*** Iowa State will practice with artificial crowd noise on Wednesday to prepare for Thursday night.