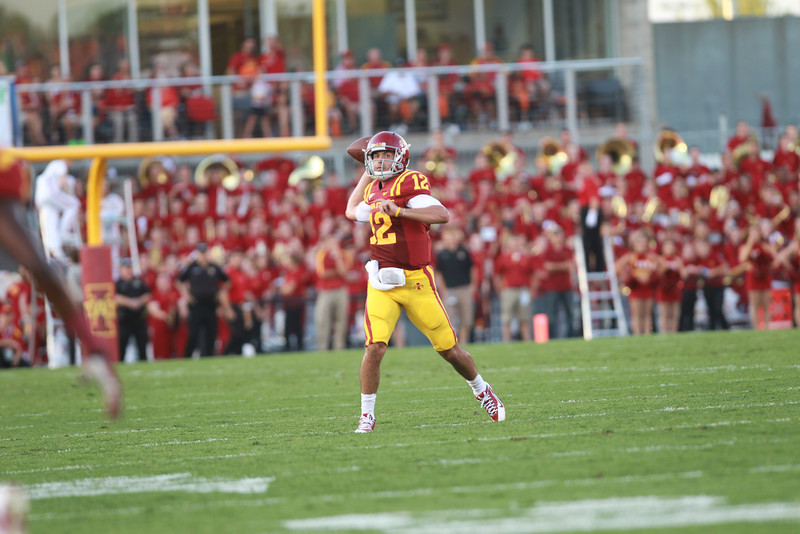 AMES — There are a lot of reasons why Iowa State lost its season-opener on Saturday night to UNI, but sophomore quarterback Sam Richardson was certainly not one of them.

Richardson, who completed 69 percent of his passes while throwing for two touchdowns without a turnover, also ran for 74 yards and was a real bright spot in a game that lacked them. What was troubling though is the fact that Richardson ran the ball 21 times and was sacked five times.

Richardson, who got hit way too often in his two starts last season too, was noticeably limping late in the game and has been wearing a precautionary boot during the early this week (although he will be ready to prepare for and play vs. the University of Iowa on Sept. 14).

Captain Obvious alert: This is an issue.

Iowa State head coach Paul Rhoads was asked about Richardson’s well being after Tuesday night’s practice. He was transparent about the fact that despite what went down on Saturday night, he still wants his quarterback to run. That’s part of the game plan. According to Rhoads, Iowa State’s signal-caller has to be able to use his legs.

“When you run an offense like this, to be a productive player he is going to be vulnerable,” Rhoads said. “One of the reasons and offense like this can be effective is that the quarterback who has an extra gap or defender that defenses have to be aware of can run for 100-plus yards.”

Richardson actually ran for 110 positive rushing yards in that game but that number shrunk to 74 when sack yardage was figured into the equation.

The more Richardson runs, the more he will get hit. The more he gets hit, the higher the chances are that he’ll end up hurt. This is football though. Isn’t that always the case?

The thing about Richardson is that he is a deceivingly good runner, one who Iowa State needs on the field.

“We are willing to understand that and play through that and have the next guy ready to go if that’s the case,” Rhoads said.

You hear that Grant Rohach?

Of the five sacks (or six depending on who you ask) that Iowa State gave up on Saturday night, Rhoads noted that four of them were the fault of the offensive line (according to offensive line coach Chris Klenakis). One was on Richardson, who held onto the ball too long.

“They have to do a better job,” Rhoads said of his line. “He (Richardson) has to get through his progression and throw the ball on time as well.”

Richardson, who completed 22 of his 32 pass attempts, was visibly patient in the pocket, a welcomed change compared to where he was at a year ago.

“There was a time where we were frustrated with Sam because he was giving up on things too early,” Rhoads said. “Now, he’s maybe hanging onto things too long. There’s a fine line."

The bottom line is that Iowa State’s absolutely has to protect the guy (Richardson) who to this point, appears to be a pretty talented quarterback for the present day and future.

Consider this: Richardson’s touchdown to interception ratio is now 10-to-1 in his young career. He’s poised in the pocket. He’s a natural leader. So far, he’s rarely made the wrong decision.

Richardson has a chance to be a very good football player at Iowa State but he can’t do that with one leg though.

Can Sam Richardson continue to stay healthy while running for his life? As we all saw on Saturday night, at this rate, probably not. After all, the defense that TCU will bring to Ames is a whole other animal compared to the one that the Cyclones just saw.

He’s a tough kid, but improvement out of Iowa State’s offensive line will be critical to how the final 11 games of the 2013 season will go.