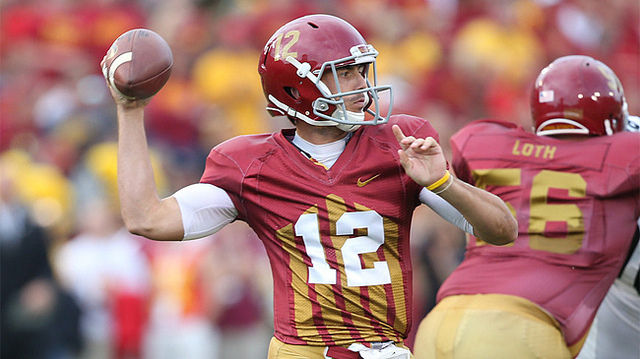 AMES — When Iowa State officially released its 2013 football schedule last spring, two bye weeks in the first four weeks of the season looked like a complete and total nightmare. The way things are shaping up though; it is going to end up being a blessing.

Take junior Tom Farniok for instance. The center, and perhaps Iowa State’s best offensive linemen, sprained his MCL in week one vs. UNI. That’s usually a three to four-week injury. In a normal season, he would miss three to four games for the Cyclones. On Tuesday night, Paul Rhoads said that he expects Farniok to play on Sept. 26 at Tulsa.

“He ran today on land,” Rhoads said. “The plan is for him to be out there.”

Rhoads said that the training staff should make a decision on Farniok’s status for the Tulsa game at the end of this week.

“We won’t know until the end of the week but the fact that he is running on land – the next test will be tomorrow morning and how his knee responded to the pounding,” Rhoads said.

Redshirt freshman Jamison Lalk will not play vs. Tulsa as he is recovering from the exact same injury as Farniok.

And then there’s quarterback Sam Richardson.

“Not great. Far from it,” Rhoads said of Richardson’s health. “He’s not 100 percent. We’re nine days away from playing Tulsa and the training staff seems to believe that he will be good by then.”

Rhoads noted that without the first bye week, Richardson would have missed the Iowa game due to his ankle injury.

“His is low,” Rhoads said. “It’s not a high ankle sprain, as people tend to overreact to and panic about. He would tell you, he feels a lot better than he did a week ago and that’s one of the things that you have to go off of.”

In one more injury note, Rhoads said that junior defensive tackle Rodney Coe should play vs. Tulsa as well.

“He is sore,” Rhoads said. “He’s another guy who will benefit from the 12 days in between games. I am confident that he will be back hopefully by the end of the week.”

If you’re still debating whether this second quick bye week is a good or bad thing, as yourself if Iowa State would be better off with or without Richardson, Farniok and Coe. That should make up your mind fairly easily.

Did you ever ask yourself who would have come in at center had Ben Loth gone down in Saturday’s game? Had that happened, Rhoads would have pulled the redshirt off of freshman Nick Severs.

“Nick Severs was an injury away on Saturday and I hope that never happens,” Rhoads said.

“Okay, not great,” Rhoads said. “He played about how you’d expect a true freshman cornerback that was a little tentative early. He gave up some room just to protect his goal line. He made some rookie mistakes but all in all, got his feet wet and I think will allow himself to get playing time because of it.”

Rhoads noted that unless injury forces him to do pull another redshirt, no other true freshmen will play at Iowa State during the 2013 season. That’s a good sign for the future of Iowa State’s defense when it comes to linebacker Alton Meeks.

*** Rhoads met with his offensive coaching staff on Monday morning.

“We watched the entire game, play-by-play,” Rhoads said. “I had a brief commentary on every single play that we went through. The good, the bad and the tweaks that we would like to see made. We had a very thorough conversation about that on Monday.”

*** I asked Paul what was different at the end of the game, when Iowa State’s offense really seemed to click.

“I think defensive mentality had changed – not wanting to give up things quick and providing a little extra room,” Rhoads said. “They didn’t execute a similar coverage where they stopped us on third down early in the game, the last touchdown was the same coverage and they didn’t play it as effectively and we raced into the endzone.”

*** Are you one of those fans who fires off angry emails to coaches after a loss? If you sent one to Rhoads on Sunday, he didn’t read it.

“They don’t make it to me so I can keep a smile on my face and keep this football team progressing forward,” Rhoads said. “We are what we were going to be coming into the season. It’s what I’ve been saying since March, April and May when we were out on the road. We are a young football team. There were going to be bumps in the road. We are rolling over those bumps. They aren’t stopping us. We are improved as a football team. We are really excited about the practice that we had today. We are excited about the improvement that we made from the UNI loss to the Iowa loss. The negative in that statement is that they were both losses and we have to figure out ways to not only improve, but win football games as we move forward. That’s what were doing collectively as a staff and altogether as a football team.” 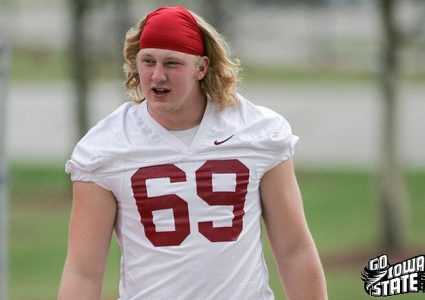