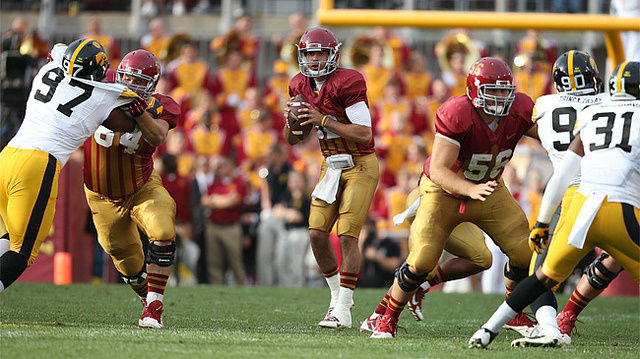 AMES — If you’re hanging out at CycloneFanatic.com on a Monday morning, I don’t need to tell you how big of a week this is for the Iowa State football program. Forget about a bowl game. Don’t even think about when Texas comes to town on a week from Thursday on ESPN.

I hate looking at things through the eyes of the players and coaches. I’m in the media dagnabbit! I’m here to overhype, overreact and entertain (so many of you think at least!)

But let’s be real here. Let’s go one game at a time.

Iowa State is currently 0-2. It is what I would classify as a bad 0-2 too (as if there’s such thing as a good one). This program has a big gash on its forehead. It’s an ugly one that desperately needs stitches. The Cyclones need to stop the bleeding in any way possible before this gash becomes even larger with long-term repercussions.

If you don’t mind, I’d like to drop an overused Will Ferrell line here on this beautiful fall central Iowa morning as I see it is appropriate.

The Cyclones have a fever, and the only prescription is beating Tulsa.

*** If you haven’t heard by now, the Golden Hurricane (1-2) are a three-point favorite for Thursday night’s game. That seems about right. I’m not sure how anybody could justify an 0-2 Iowa State being a favorite over anybody on the road right now.

*** There’s a lot of chatter floating around about Iowa State’s junior center Tom Farniok and his status on Thursday night. The Cyclones are hopeful that he will play. I cannot put into words how enormous that would be for this struggling offense, but I’ll believe it when I see it. It’s not that I’m not taking everybody at his word. I’m sure that the program is telling the truth about his status. But is he going to be at 100 percent?

We will all find out together on Thursday night.

On last Thursday’s U.S. Cellular/Cyclone Fanatic Radio Show, former Iowa State center Ben Lamaak told me that Farniok at 80 percent is better than anybody else at 100. That’s how big of a deal this one injury is to this football team.

*** Got plans Thursday night? We are endorsing game watches at BenchWarmers in Ankeny and The Keg Stand in West Des Moines. Both are big time Cyclone bars that do it right.

BenchWamers will be offering the following specials:

— Did Texas “bounce back” or is Kansas State just not any good? Or, is it a little bit of both? Things that make you go “hmmm”….

— Only a few short months ago, I picked West Virginia to finish last in the Big 12 and got bombed on Twitter by the Mountaineer Nation. Yeah, about that…

In all fairness, despite Saturday’s utter debacle of a performance against Maryland, the Big 12 is ‘blah’ enough this year where Dana Holgerson’s squad should win a game or two right?

At the same time, they did turn the football over (against an average ACC team let me remind you) six times and only accumulate 175 yards of total offense. Anything is possible. Have fun with Oklahoma State next week!

They are losing their next five. No further analysis is needed.

— Okay Art Briles, you have proven your point. You’re offense is as ‘BA’ as Bruce Willis in the original Die Hard. Now drop 70 on a BCS team, and your upcoming Oct. 5 game against West Virginia doesn’t count.

— For the life of me, I cannot figure out why Urbandale doesn’t get Iowa State commit Allen Lazard the football more often. Granted, he was being doubled the entire night and one of the guys defending him, Rico Gafford, is pretty good. But even so, I counted fewer than five targets for Lazard in the entire game. That seems insane to me. This is high school football. He was clearly the best player on the field. Get the ball in the hands of your best player in any way possible.

— If you looked at the box score and only saw two receptions for Lazard, do not worry. The kid is 100 percent legit. Again, the five targets (approximate) had way more to do with it than Lazard’s skill-level or effort.

— I wrote about this a few weeks and I’ll hammer it out again, Dowling’s Rico Gafford is a D-1 football player in my opinion. I won’t go off on that tangent again though. The only thing holding this kid back from having a boatload of offers is his 5-foot-9 frame.

— The kid who probably impressed me the most was Dowling’s junior quarterback, Ryan Boyle. Rivals.com lists him at 6-foot-1, 205-pounds and without any offers at this time.

You know how you can just watch certain guys and see that the game moves slower for them than others around? That’s what I saw with Boyle, whose arm-strength really opened my eyes. He is a 2015 kid. Obviously, Iowa State doesn’t have a quarterback committed in that class yet. I’d keep an eye on Ryan Boyle.

*** Iowa State picked up two verbal commitments over the weekend.

You know it’s crazy to write this, but the first one just might go down as the most important commit of the class. That’s punter Colin Downing. For real – think about how much Kirby Van Der Kamp has meant to Paul Rhoads’ program over the last three years.

Think I’m blowing smoke? Talk to anybody who has anything to do with Iowa State’s defense. The Cyclones wouldn’t have been rankly so highly in scoring defense over the last two seasons without Kirby Van Der Kamp. That is a fact.

Rhoads has his punter for the next for years and I can only assume that’s some weight off of the staff’s shoulder.

*** Another commitment came trickling in on Sunday afternoon. Dedric Brinson was that man. Brinson, a Florida prospect, marked the fourth committed defensive back in Iowa State’s 2014 class.

He’s a cornerback, but is notably a 6-foot-2 cornerback. That is all that you need to know.

Keep checking out CycloneFanatic.com all day today, as it is a busy one. I assume that a new depth chart will be released this morning. Plus, Paul Rhoads will meet the media at 11:30 today. I’ll post live updates on Twitter (@ChrisMWilliams) and a complete recap later this afternoon. 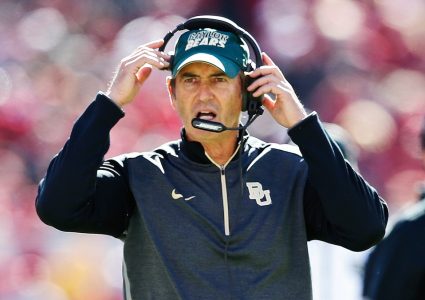