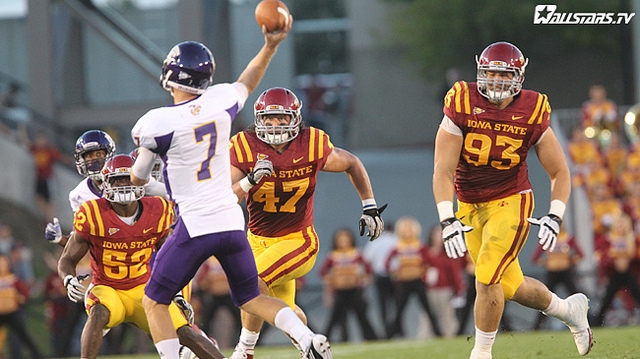 Recapping how former Cyclones performed in week three of the NFL..

*** Cornerback Leonard Johnson of the Tampa Bay Buccaneers played another good game for the Bucs on Sunday. Johnson picked up five tackles, two solo, in a 23-3 loss to the New England Patriots. Johnson now has 17 tackles on the young season, 13 of which are solo, he also has two pass deflections.

*** A.J. Klein of the Carolina Panthers recorded his first career professional tackle on Sunday. Klein picked up one assisted tackle in the Panthers’ 38-0 win over the New York Giants. The rookie linebacker had appeared in the Panthers’ first two games but had not yet recorded a tackle.

*** Jake Knott appeared in the game last Thursday for the Eagles, a 26-16 loss to the Kansas City Chiefs. Knott has recorded two tackles on the season for the Eagles defense.

*** Ahtyba Rubin of the Cleveland Browns made his first appearance of the season on Sunday. Rubin recorded three tackles, two solo, in the Browns’ 31-27 win against the Minnesota Vikings. Rubin had sat out the first two games of the season with a calf injury.

*** Kelechi Osemele of the Baltimore Ravens started once again on the Ravens offensive line. Osemele has started every game of his career since going to the NFL. The Ravens picked up a 30-9 over the Houston Texans this weekend. Tim Dobbins also appeared in the game for the Texans but he did not record a stat.

*** Seneca Wallace of the Green Bay Packers continues to back-up Aaron Rodgers. The Packers fell to the Cincinnati Bengals this weekend by a score of 34-30.