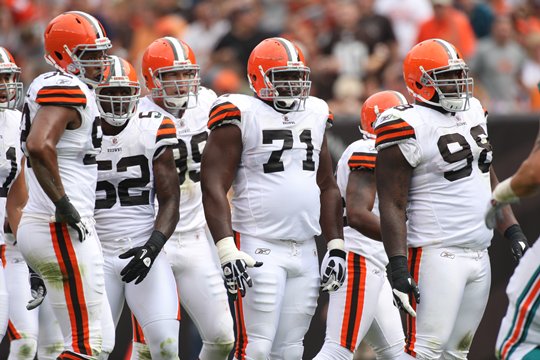 Recapping how former Cyclones performed in week five of the NFL season.

***A.J. Klein picked up one tackle for the Carolina Panthers this week. The Panthers fell to the Arizona Cardinals 22-6. On the year Klein has two tackles, one solo, for the 1-3 Panthers.

***Ahtyba Rubin (pictured above, No. 71) picked up eight tackles, five solo, and his first sack of the year in the Cleveland Browns’ 37-24 win over the Buffalo Billls. Rubin now has 14 tackles, 10 solo, to go along with his one sack for the 3-2 Browns.

***Jake Knott appeared, but did not record stats, in the Philadelphia Eagles’ 36-21 win over the New York Giants. Knott has four tackles, three solo, for the 2-3 Eagles.

***Kelechi Osemele started on the offensive line once again for the Baltimore Ravens. Osemele moved his career start streak to 21 in the Ravens’ 26-23 win over the Miami Dolphins.

*** Tim Dobbins did not appear in the Houston Texans’ 34-3 loss to the San Francisco 49ers. Seneca Wallace also did not appear this week for his team. Wallace’s Green Bay Packers beat the Detroit Lions 22-9. The Tampa Bay Buccaneers and cornerback Leonard Johnson had a bye week.