Start slow in the Big 12 and you’ll lose.

For the second-consecutive game, Iowa State came out lethargic only to come back. This time, the Cyclones erased an 11-point deficit to beat Yale, 80-70.

The win didn’t do much do to sooth Hoiberg’s frustrations with Kansas and the start of conference play looming on Jan. 9.

“If we play like throughout conference play, we might be done winning,” Hoiberg said. “It can’t happen.”

“I’m so disappointed in how we came out of the gate. We did it last game against UMKC, as well. The frustrating thing for me is just how capable we are as a team when we are doing things the right way.”

Thankfully for Iowa State, an overmatched Yale squad couldn’t hold its lead when the Cyclones turned up the heat. Iowa State sprung to life when Hoiberg changed the tempo with a full-court press.

After scoring just 27 points in the first half, the Cyclones poured in 53 after the break.

“We have a lot of weapons,” Georges Niang said. “If we come to play, we are a tough team to mess with.”

Led by an aggressive Will Clyburn, the Cyclones finally woke up after Armani Cotton’s 3-pointer gave the Bulldogs a 46-36 lead. Clyburn answered with a thunderous putback dunk and the come back was on.

Niang and Clyburn both hit tough shots to pull Iowa State within 51-47. Minutes later, Niang stole the ball and found Korie Lucious for a breakaway layup to knot the score at 55.

Tyrus McGee swished a 3-pointer to give the Cyclones their first lead since the 16:36 mark in the first half. Iowa State didn’t trail again.

“We showed what we are capable of doing when we play the right way,” Hoiberg said. “We went from 27 to 53 in two halves by just playing with energy. That’s got to be constant, you shouldn’t have to coach energy.”

The Cyclones finished off Yale inside. A pair of dunks by Clyburn and a Melvin Ejim layup made sure Iowa State would finish the non-conference season with a 10-3 record.

Six Cyclones finished in double figures and Iowa State turned the ball over only three times after the break.

When Will Clyburn is aggressive to the hoop, good things happen for Iowa State. After another slow start, Clyburn sparked a Cyclones rally.

The senior finished with a game-high 17 points, including 14 in the second half. Most of those came in the paint.

“Me playing aggressive is one of my strengths,” Clyburn said.

When Clyburn wasn’t soaring for another dunk, he forced Yale to foul. He made 7-of-9 free throws from the charity stripe.

Fred Hoiberg on his team’s play in the second half

“Listen, if we play like we did in that last 15 minutes, we are going to be fine.”

–       Korie Lucious had 10 points and five assists against just one turnover. 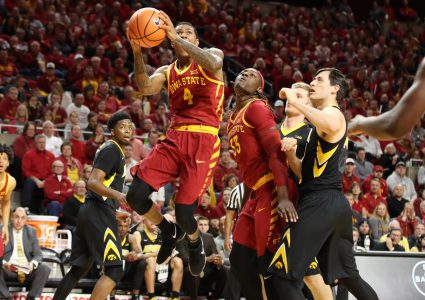