The start of the college basketball season following the off-season – abreviated as it was – during a global pandemic was not supposed to be crisp and clean.

“It probably wasn’t our best,” associate head coach Jodi Steyer, who filled in for head coach Bill Fennelly, who is away from the program due to close contact with an individual who tested positive for COVID-19, said. “(We were) a little bit shaky, just with so many turnovers in the first half, but I thought it was big that some of our veterans really came up when we were struggling.”

The Cyclones and Mavericks combined for 12 turnovers in the first quarter on 29% shooting from the field.

They did it in an arena that held a band, cheer squad, and somewhere around 50 parents and family members in the crowd.

It was anything but normal.

That’s at least aside from the play of junior Ashley Joens on Wednesday. The returning star for the Cyclones tallied 25 points and seven boards including 13 of the points coming in the second quarter.

She picked up right where she left off following her stellar sophomore season.

“I was really thankful Ashley Joens was on our team, as we always say,” Steyer said. “She never ceases to amaze me in the way that she gets into scoring positions. (Her second quarter) was huge, and I think she senses when the team needs her, she knows when to step up. (Today) she did.”

It was much needed after the first quarter for the Cyclones, too. The team was able to muster just 14 points in the opening frame before Joens took over.

That’s something she wants to do as a leader.

“As a leader on this team, when we were struggling a lot, especially towards the start of the game, just being able to score and getting stops helps,” Joens said. “You just have to step up, make a few plays, allow the rest of the team to get comfortable and then after that I felt like they were able to relax and play (like normal).”

Joens wasn’t quite alone, though.

Kristin Scott was the lone other Cyclone in double figures on Wednesday grabbing 10 points and nine boards in the victory. Madison Wise ran around a little bit and matched Scott’s nine rebounds along with six points of her own. Rae Johnson added eight points and was a team-high plus-22.

When four of the players on the team are freshmen, getting comfortable is easier said than done.

It’s not the easiest thing to come out and perform at a high-level in a normal year, but when three of the newcomers are starting the game and playing a large chunk of minutes, it just makes it tougher.

It led to the slow start that we saw, but Joens’ second quarter was a big help.

“I think it really helped that our upperclassmen took control,” freshman Lexi Donarski said. “(Joens) had a great game tonight. She really got everything going for us and we were able to find our energy throughout it.”

Donarski led the entirety of the roster in playing time on Wednesday, collecting 27 minutes in the game and finishing with five points and four rebounds.

The freshman class finished the day with a combined 20 points across the four young guns.

“We just want to take a step forward in each game and each practice that we (participate) in,” Donarski said. “There are definitely things that we know we can get better at going forward. I think the minutes really did help us, just to be able to work through some of the initial things in our first college game.”

Nonetheless, the group got through it and the Cyclones cruised to the win, even without head coach Bill Fennelly on the bench due to a quarantine he started on Monday.

Fennelly was missed, but his absence didn’t impact what happened on the court.

“It was a little different,” Joens said. “We’re always used to hearing his voice on the sidelines, but I think Coach Steyer did a great job of stepping in. She took on that role and all of the coaches helped out. It worked well.”

It worked to the extent of a 26-point win, and even though the game and the team had its flaws, it’s hard to gripe about that result too much.

The group of young guns will have another chance to improve and gel with the experienced upperclassmen on Saturday, November 28 as they travel north to take on South Dakota State on the road.

Until then, there’s a pair of days to improve and watch film, and they’ll be sure to use it. 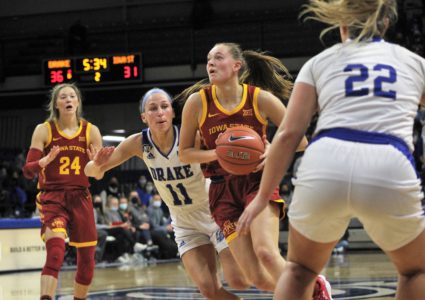