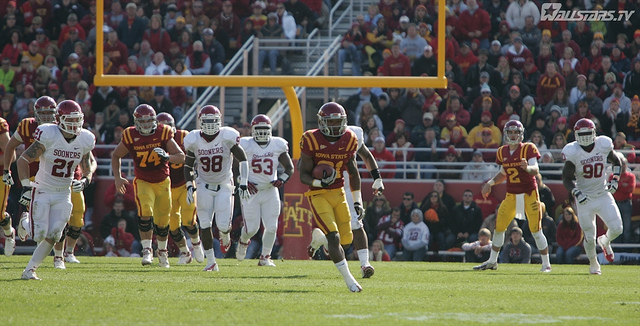 AMES — The Cyclones are starving for a win and Paul Rhoads was very open about that during his press conference on Monday.

"Can you hear my stomach?"

Rhoads cracked that joke but the head coach was dead serious, as were his players. Finding win No. 6 was talked about plentifully but Iowa State isn’t going to look past the pesky 1-9 Kansas Jayhawks, a team that took Texas Tech to double-over time a week ago (in Lubbock), in attempt to become bowl eligible for the third time in four years.

“I truly believe that our team is still focused on Iowa State and our improvement," said Rhoads. "I just haven’t had a day where I’ve left the practice field whether it be a Sunday getting back to work after a tough loss or a Thursday at the end of a hard week of preparation where I’ve left the field disappointed in our focus or our work ethic or the preparation that we’ve accomplished. Because of that, I think we are still improving as a team. I think our focus is on that goal more important than the motivation, who the opponent is, whether it is the sixth win, the seventh win, the eighth win or whatever that is.”

In addition to the close loss to Tech, Kansas has been especially competitive at home this year. The Jayhawks played TCU (when the Horned Frogs were at full strength) tough, in a 20-6 loss. Kansas took both Oklahoma State and Texas down to the wire at home. The Longhorns literally had to score on their final possession to escape Lawrence victorious.

“You absolutely cannot go into this with any sort of roll your helmet out there and expect to win," said junior running back Jeff Woody. "If you look at the past three times we have played them, in 09 they beat us. We had a chance to win. In 10 and 11, it was close. Kansas is not a pushover team, despite what their record says. If you look at the last couple of games and you look at them on film, they are not a bad team. They are just a hair short of them getting maybe four, five or six already.”

It wasn’t perfect but it was better.

I’m speaking of Iowa State’s rushing attack last Saturday in a 33-7 loss at Texas. The Cyclones rushed for 144 yards but could have racked up more had they not gotten down early to the Longhorns.

“We had a number of openings to run through and that was pleasing," said Rhoads. "We made more people miss than we have recently and that added up to extra yardage."

Center Tom Farniok saw improvement in the running backs and the offensive line.

“It was the best our running backs kept the ball pressed front side and were a little more patient in the backfield and read the holes," said Farniok. "We did a better job of opening them. We shot ourselves in the foot and got down too much to really consistently run the ball a lot. We had to start taking more shots with the passing game and just couldn’t get it going.”

Neither wide receiver Josh Lenz or cornerback Jansen Watson showed up on Iowa State’s depth chart Monday morning. Lenz has been fighting a quad injury over the course of the last month.

“Josh – I can’t call. I wish I could," said Rhoads. "I feel just sick for him. This is one of those injuries. They are slow healers. If you’ve ever been kneed in the thigh or experienced anything like that, it’s tough to come back from.”

Watson, who is suffering from an MCL injury, missed the majority of the Oklahoma game and all of Saturday’s loss to Texas.

“Jansen is day-to-day," said Rhoads. "Really believe he will be back for West Virginia. Not sure this week but I’m not going to hold him out.”

Rhoads was asked if Saturday’s game is a "must-win."

“It’s the 11th must-win that we’ve gone into this year," said Rhoads. "I look at every game as a must-win. We’ve prepared and we’ve worked. We’ve grinded it out. I don’t go into it saying, ‘we can lose this game. It’d be alright if we’d lose this game.’ I want to win them all.”