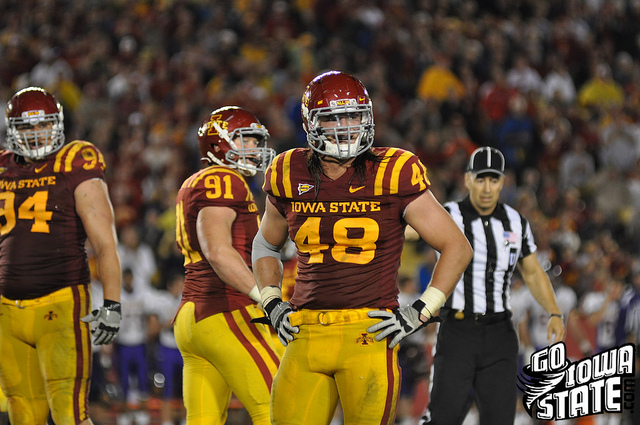 Can you blame him?

In Iowa State’s last two games against Baylor and Missouri, the Cyclones have given up 391 and 294 yards on the ground.

"It needs addressed. It needs fixed," said Rhoads. "Wally (Burnham) and his staff and the players are working hard to shore that up."

Things won’t get any easier on Saturday in Ames, as Texas A&M will bring the nation’s 16th best rushing offense into town.

What will the Cyclones do to improve in this vitally important category? It’s pretty simple actually. Get back to fundamentals.

"I thought that we tackled poorly for probably the first time on Saturday down in Columbia," said Rhoads. "What they did created a lot of space and too many holes, even when we had guys in gaps there was space to operate with."

“Gap assignments. We’ve failed to execute some of those," said Lattimer. "The other team has taken that opportunity and gashed us. Moving on from the past few games, we’re going to work our best to stay gap sound.”

Not all on the QB: It’s classic football conversation. Win a few games and the quarterback is the hero. Lose a few and it’s all about who’s next in line.

Steele Jantz has been much less than perfect over the last few weeks. The junior quarterback has been a turnover machine and is now fighting a foot injury. But it’s safe to say that there is plenty more wrong with the offense than Jantz alone.

“Absolutely there are other elements to it, but the quarterback is still the pivotal payer on the field," said Rhoads. "He touches the ball every snap. He is making decisions with the ball in his hand. Did we miss blocks to create 2nd and 14? You bet we did. Did we run incorrect routes on third down to not allow the quarterback to throw the ball where he should to convert? Sure we did. But it is the nature of that position that you are going to get the most credit or the most critiqued when things aren’t going as proficiency as they should be.”

Give Jantz credit. He had an opportunity to blame sketchy offensive line play for his troubles during an interview on Monday. Jantz put it all on his back.

“There has been pressure a few times but I’ve certainly had enough time in the pocket to make plays," said Jantz. "I have been on teams where I’ve gotten a lot less pressure. The protection is fine.”

On Jared Barnett: What does redshirt freshman Jared Barnett bring to the table? Of all the quarterbacks on Iowa State’s roster, Barnett just might be the most effective when it comes to running the zone-read, a critical component of Tom Herman’s offense.

“Jared is not the fastest of our quarterbacks or the quickest of our quarterbacks, but he maybe runs that as effectively," said Rhoads. "He does a great job of carrying the fake of it and does a nice job with the early start of making the guy miss and getting the play started as opposed to running into the crowd.”

Barnett threw an interception on his first ever pass attempt as a Cyclone last Saturday in Iowa State’s 52-17 loss to Missouri. Like you’d expect from any rookie quarterback, Barnett told me that he was impressed by the speed of the Big 12 game.

“It was much faster than I thought it was going to be," Barnett said. "I felt like I was able to pick up my play to that level and play with the speed of the game. I kind of slowed it down to my speed after I was in there a few times.”

“After getting that experience, I think it will be easier for me to take control of the game.”