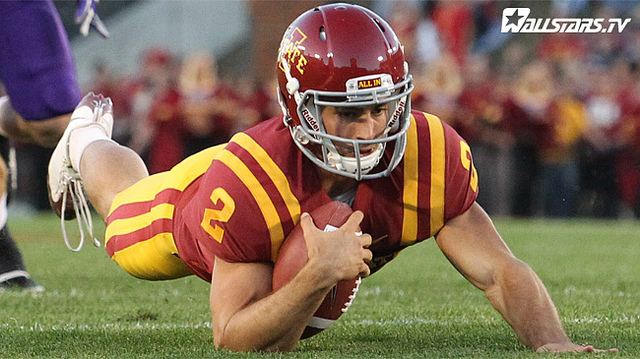 AMES — Fans and media alike want to know specifics regarding Iowa State’s lingering quarterback controversy heading into this weekend’s Homecoming tilt with Baylor. Paul Rhoads is not willing to give those specifics at this time.

That’s about as deep as the head coach got during the 15 minute media session. Steele Jantz, Jared Barnett and redshirt freshman Sam Richardson all appear to be in the mix at this point in time.

Quarterback play has been inconsistent for Iowa State all season long. After leading the Cyclones to a 3-0 start, Jantz turned the ball over four times in a 24-13 Sept. 29 loss to Texas Tech. Barnett rallied the troops and led the Cyclones to a 37-23 win at TCU the next week before completing only 35-of-75 pass attempts in the last two games, both losses to Kansas State and Oklahoma State.

One reporter asked what Richardson would have to do to earn his first start in an Iowa State uniform on Saturday evening vs. Baylor.

“I don’t know if he has to be two times better than Jared was better than the other guys in practice last week. I don’t think that is necessarily the case," said Rhoads. "I want to see who the best guy is on the field and also play into it what has happened during games so far this season.”

Stay tuned. This will likley be a late-week decision. Fans and media might not know the scoop until kick time.

*** Rhoads only mentioned two injuries during the press conference. The first was junior running back James White, who has missed the last two games with a knee injury.

“He ran yesterday," said Rhoads. "It was the first time he has ran on land since the surgery. Now he is at a point where it should start progressing at a rapid pace. We’ll see. He may be back on Saturday. He may not.”

*** As for senior wide receiver Josh Lenz, it sounds like he’ll be in the lineup Saturday night.

“I am counting on him to be back," said Rhoads. "The fact that he was in pads on Saturday and gave it a go then – another seven days. I think he’ll be ready to go.”