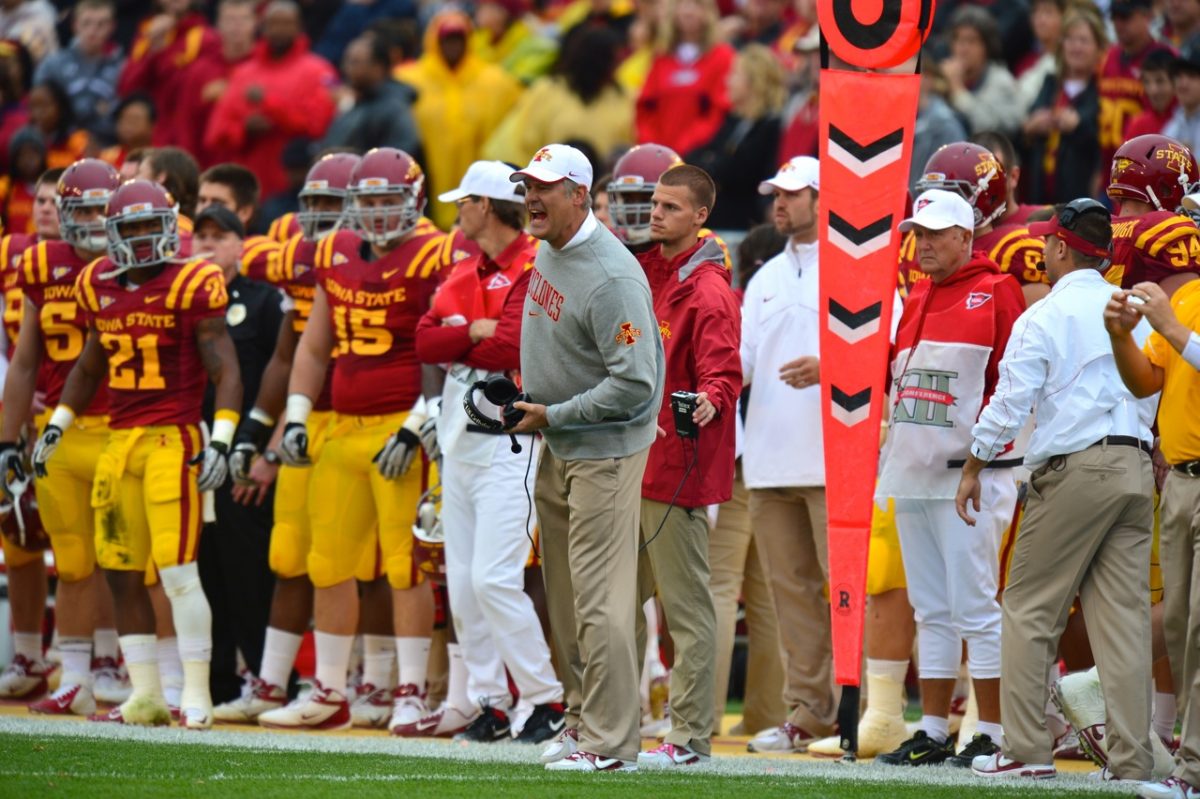 I’d like to begin this week’s Monday Musings column with a recollection from Saturday night’s installment of Cyclone Reaction, the Cyclone Radio Network’s postgame show that I co-host with former Iowa State wide receiver Jack Whitver.

An older Cyclone fan called in (his name escapes me at this time but the call stuck with me over the weekend). Unlike most calls we had gotten up until that point in the program, this gentleman seemed relaxed.

“I’ve been going to Iowa State games for 40 years,” the passionate Cyclone said. “Back in the day, all you could listen to on the radio was Iowa Hawkeye postgame. Every time they’d lost, there’d be a Hawkeye meltdown!”

“I never thought I’d see the day where there was a Cyclone meltdown. You guys might as well call this show Cyclone Meltdown from now on!”

Combine Cyclone Reaction, my work here at Cyclone Fanatic and day-to-day life (talking with friends, family, colleagues, etc.), good or bad, I hear just about every take on every Iowa State football game that a guy can imagine.

But I really liked the take from that older Cyclone fan though. He didn’t play the morale victory card. Like all of you, he was upset. He knew that the team he loved was that close to knocking off the 5th ranked team in America. After watching Iowa State’s 27-21 loss to Kansas State, this man knew that his team wasn’t far off at all from being 5-1 or even 6-0 on the season. He knew that the Cyclones let another opportunity slip away at home – a big one and potential program changing one at that. But this seasoned fan also didn’t let the big picture escape the brain that his Cardinal and Gold blood pumps through every day.

The largest crowd in Iowa State football history turned out on Saturday and nearly every Cyclone fan in attendance expected to beat No. 5.

Iowa State might have lost on Saturday but the tide has turned from a culture standpoint in Ames. To quote the man who started it all over a decade ago Mr. Dan McCarney, “There’s no doubt about it.”

*** Here’s another take on the game that I’ve heard quite a few times:

“The only difference between Iowa State and Kansas State is the quarterback.”

For those with this opinion, you might be onto something. I disagree to a point because Iowa State’s offensive line has been a significant disappointment in its two losses this season. Kansas State’s was really, really good.

And forget about all other factors for a moment. Let’s just say that indeed the only difference between the two programs right now is the quarterback (I don’t believe that but this is for the sake of argument of course). That’s kind of a big deal though isn’t it?

Collin Klein is a Heisman Trophy contending All-American quarterback. You don’t just pick these guys up off of the street. If it was so easy to do what Klein does, wouldn’t more people do it?

But your point is well taken folks. If it’s Steele Jantz, Jared Barnett or Sam Richardson, the pass game has to be a legitimate threat if Iowa State is going to get its running game going. That’s football 101. And no, it isn’t all on the quarterback. The line has to block. Receivers have to get open. When they are open, they have to catch the ball. To me, this is an offensive problem in general.

Oklahoma State is currently ranked 73rd nationally in scoring defense (keep in mind that the Cowboys had Savannah State and La. Lafayette on their non-conference schedule) so Iowa State’s offense will have a chance to redeem itself on Saturday. I predict that it will.

*** To me, here’s the most frustrating thing about this football team. It’s the fact that the defense is SO GOOD. Know what I mean? Earlier, I wrote that guys like Collin Klein don’t grow on trees. Well neither to Jake Knott and A.J. Klein. This is an elite defense, maybe the best one we’ve ever seen at Iowa State. You can’t help but think about how good this team could potentially be with just a little bit of consistency on offense…

TCU’s rout over Baylor on Saturday night was good to see from an Iowa State perspective…As was Texas Tech’s dismantling of West Virginia (although that one didn’t surprise me at all).

Texas Tech is legit folks. If that program is 9-3 at the end of the season, I won’t be surprised at all. That’s a top two or three defensive line in the conference. Just ask Geno Smith.

*** A fearless prediction…West Virginia will beat Kansas State next weekend. If that Geno Smith led offense gets a few early touchdowns, the Wildcats will have a tough time coming back.

*** Baylor’s defense is even worse though. The Bears are currently ranked 120th – dead last – in America in total defense giving up a staggering 558 yards per game.

*** Speaking of bad defense, let’s talk about Texas shall we? I attempted to go back and watch some of Saturday’s Red River Shootout via my DVR on Sunday morning and had to stop in the second quarter. It’s just crazy to me (this probably stands out more to a guy who covers Iowa State for a living) that a team with so much talent can be that bad on defense. Texas’ defense gave up 18 plays of 15 yards or more to the Sooners and is now currently ranked 99th in America. This defense is the same one that pretty much anybody who is anybody would have picked to be the best in the Big 12 coming into the season.

I’m not a big hatchet guy traditionally but Mack Brown has already run through his coordinators. The talent is there. Effort most certainly wasn’t on Saturday.

There are some big, big problems brewing right now in Austin.

*** I have no clue how Mike Gundy is approaching this game but I know how Oklahoma State fans currently feel about the Cyclones. Dude – Iowa State shattered their chance to play for a National Championship last season. How do you think they feel?

It should be a fun week and I’ll be mixing it up with my pal Kyle Porter from PistolsFiringBlog.com later this week to get the pulse of the Cowboy Nation so stay tuned.

*** I wasn’t surprised at all that Kansas game Oklahoma State all that they wanted on Saturday. Ole Chuck Weis doesn’t have much talent down there in Lawrence. After an hour-long rain delay, I think a total of 200 people stuck around to watch that contest but the Jayhawks were game as they have been all season long. I like what Weis is doing.

That’s all I’ve got for now. Stay tuned to CF for coverage of today’s Paul Rhoads press conference later on. Peace!