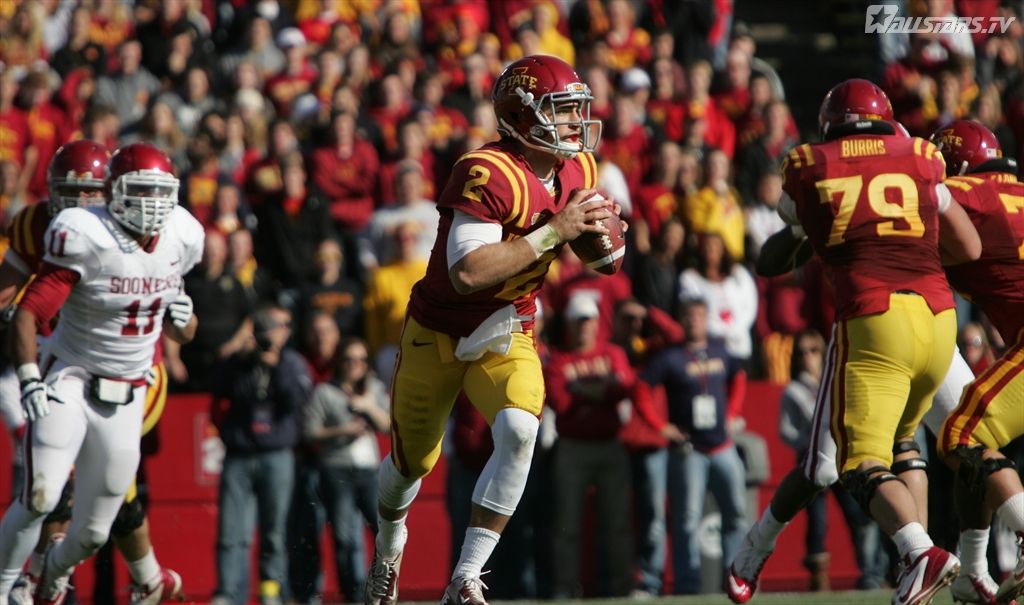 Do not worry. I’m not going to come at you with any hateful, ignorant and obnoxious political jargon today in Monday Musings. We all get enough of that by watching television, listening to the radio, surfing the web, Twitter, Facebook, etc.

I am a political junkie. I love the process. I love democracy. My wife can attest to the fact that there’s no other channel watched more in our home than CNN throughout the year. But man, I’m gassed from this election cycle. Which is why we love sports!

Here’s what’s on my mind on this soggy Monday in central Iowa.

*** The Cyclones might have lost to Oklahoma by 15 points on Saturday but I feel a heck of a lot better about the rest of the season than I did going into that football game and here’s why: For really the first time in his career, Steele Jantz went toe-to-toe with a top-of-the-line defense and didn’t consistently make poor decisions with the football. His one interception came during desperation mode for the Cyclones. You might as well throw that one out the window in my opinion.

Time after time on Saturday, Jantz made the safe play. If it was throwing the ball away or knowing when to run, Iowa State’s senior gunslinger made the smart play. The problem on Saturday was not No. 2. He didn’t get any help. Iowa State’s wide receivers dropped pass after pass for the second week in a row.

*** And that’s what seems to have been the problem with Iowa State’s offense all season long. If it’s not one thing, it’s another. Steele Jantz played well enough to win vs. the Sooners. But when you combine below average run blocking, the fact that Iowa State’s running backs only combined to carry the football 11 times, the drops and Oklahoma’s obvious talent advantage, the Cyclones were climbing a steep hill in attempt to win that game.

*** But here’s the good news. I do think that we saw some progress from the offense. I’ve already touched on Jantz taking care of the football. Not only that but for the second week in a row, he made some tough, tough throws. I think that Shontrelle Johnson is running the football better than he was a month ago. James White will just keep getting healthier. I’m not worried about the drops. That really hasn’t been a problem this year before the Baylor game. The one big concern is still run blocking in my opinion and I’m not quite sure what you can do about that at this point.

*** Up next are the Texas Longhorns, who Las Vegas has tabbed as a 9.5-point favorite over the Cyclones for Saturday’s 11 a.m. kick. Mack Brown’s crew is an interesting bunch. Interesting in the sense that two weeks ago, talk of Brown being fired at the end of the season was abundant. Just a reminder folks – the Longhorns are now a 7-2 football team. A lot of what they have done hasn’t been pretty, but Texas is currently on a three-game winning streak and just keeps finding a way to get the job done.

*** Here’s a stat that you’ve got to like if you’re an Iowa State fan heading into Saturday: Texas’ rush defense is currently ranked 104thin America giving up 206 yards per game on the ground. That’s just what the doctor ordered if you’re Iowa State is it not?

*** But there’s a problem that comes with that too. The Longhorns only gave up 112 yards on the ground in an impressive 31-22 win over Texas Tech last weekend. You know that the Longhorns have talent. They’re loaded. The Longhorns can turn it on at any time.

*** I had a radio conversation on 1460 KXNO’s “Miller & Brinson” program earlier this week that got me thinking. Ken Miller, who has a football mind that I respect greatly, threw out the idea of Ankeny High School quarterback and Iowa State commitment Joel Lanning becoming a Collin Klein type QB for the Cyclones in the future. Lanning, who Rivals.com lists at 6-foot-2, 200-pounds, is a winner. He’s a four-year starter at Ankeny (which doesn’t happen very often). After watching Oklahoma use Blake Bell this past weekend, Miller’s idea resonated with me. I got to thinking, “why not use Lanning in this kind of a role?” during Saturday’s contest.

I’m just thinking out loud here. But just imagine how much time Iowa State probably spent preparing for the “Belldozer” package last week. A wrinkle like that is a big weapon and Iowa State can use any of those right about now. This one has some potential in my opinion.

*** When I think of Kansas State football, I think of this song by Toby Keith.

Note: The Wildcats were picked to finish sixth in the Big 12 this season. How do you like me now?

I LOVE the way that this team goes about its business. The Wildcats aren’t flashy. They’re always on “upset alert” and yet, they always win.

Having said that, did anybody else catch Bill Snyder’s postgame interview on ABC? Can somebody please explain to me how this man recruits and why any 21 year old would want to play for him?

Oh yeah. Because they want to win. Props to our friends in Manhattan. That team is a legitimate title contender. Now let’s just pray Collin Klein is healthy…

*** Two weeks ago, I declared my fear of Nov. 17’s road trip to Kansas on the Cyclone Radio Network’s postgame show “Cyclone Reaction.” I was met by mockery from Jack Whitver and Brent Blum. Now folks, Iowa State is a better football team than Kansas. Duh. But the better football team doesn’t always win. Here’s why I’m nervous. Look at what the Jayhawks have done at home vs. Big 12 teams this year:

Fanatics – This is a pretty decent Kansas team when they are playing in Lawrence. It’s a team that gave TCU a hell of a fight and took Oklahoma State and Texas to the wire. My gut has been telling me for a while that the Cyclones are in for a slugfest in two weeks.