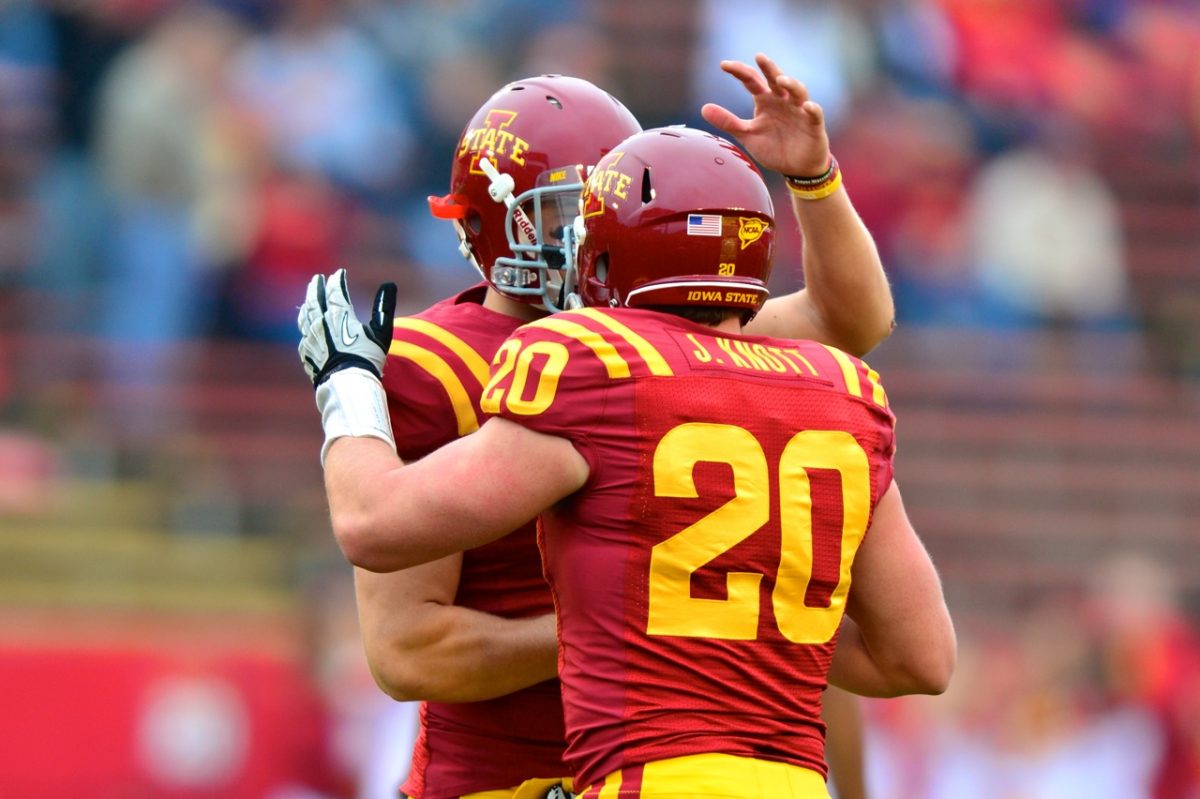 AMES –Jake Knott doesn’t need to dress up for Halloween.

When you constantly play like Superman on the football field, who needs a costume? The only outfit Knott wears comes in Cardinal and Gold.

Behind a heroic performance from Knott on Saturday night after he was questionable to play, Iowa State (5-3, 2-3) topped Baylor, 35-21.

“Jake is the face of this program,” linebacker Jeremiah George said. “He’s the face of our defense. He gives it everything he’s got. He’s an all-in kind of guy. He’s one of those guys Coach (Paul) Rhoads talks about and he proved that tonight.”

Throughout the week, there were rumblings Knott wouldn’t suit up against the Bears (3-4, 0-4) and his Cyclones career was in jeopardy because a left shoulder injury he suffered last week against Oklahoma State. One report even stated he was definitely out for Saturday’s matchup.

Knott delivered another vintage performance. The Waukee native finished with 11 tackles and one huge forced fumble.

After a failed onside kick by Iowa State, Baylor looked poised to take a 7-0 lead on the Cyclones’ 3-yard line. That’s until Knott jarred the ball loose from Baylor quarterback Nick Florence.

The Cyclones recovered in the end zone and never looked back.

“(Knott’s) a leader of our football program,” Rhoads said. “A two-time captain, which tells you what his teammates think of him. Great players make great plays and in big games. I promise you, every game in the Big 12 is a big game.”

“The shoulder isn’t that bad,” Knott said. “I went into the game and told myself I wasn’t going to think about it and I didn’t. I can deal with it (Sunday). I’m used to that.”

While Knott’s performance is almost expected, Steele Jantz played like he was wearing a cape on Saturday. The senior’s record-breaking performance included 36 completions, 381 yards and five touchdowns.

The most important statistic? It was the first Big 12 win for Jantz as a starting QB.

“There’s a reason he was our starting quarterback the last two years,” Rhoads said. “He’s a physically gifted player.

“This is probably his best overall game as an Iowa State Cyclone.”

Jantz was sharp all night. The Agoura Hills, Calif., native tied the score at 7-7 when he hit Jarvis West on a double-move for a 23-yard score. The duo connected for three touchdowns against the Bears.

In fact, it was the first three touchdowns of West’s Iowa State career. The sophomore tallied seven grabs for 99 yards and the three scores against Baylor.

The offense kept rolling in the second quarter. First, Jantz showed courage in the pocket, hitting Albert Gary on a 36-yard strike under heavy pressure. Later, with time dwindling in the half, Jantz found West on a slant route from seven yards out for the score and 21-14 lead.

Jantz carried the hot-hand into the second half. He put an exclamation point on his performance when he rolled to his right and threw a 22-yard dart to a leaping West in the end zone for a 35-14 advantage.

After bouncing in and out of the lineup the last few weeks, Jantz delivered on Saturday.

Knott and the defense took over from there. The Cyclones held an explosive Baylor offense that entered the game averaging 48 points in check.

The victory moves Iowa State within one game of bowl eligibility, and gives the Cyclones momentum before Oklahoma comes to Ames next weekend.