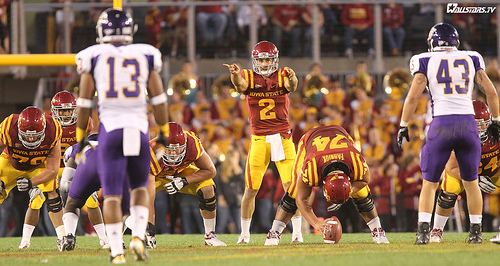 AMES – In order to stop Baylor’s aerial assault, Iowa State needed to win in the trenches.

Last season in Waco, the Cyclones surrendered 395 yards in a 49-26 loss. Iowa State flipped the script in Saturday’s 35-21 victory.

The Bears mustered only 115 yards on the ground, and scored well below its 48-point average coming into the contest. Credit a brilliant game plan by defensive coordinator Wally Burnham and great execution by his players.

“We made sure the number one thing we did was stop the run so we could control some other things they do offensively,” linebacker Jeremiah George said.

Yes, the Bears totaled 541 yards, but the Cyclones defense made them work for each one. Baylor went just 9-of-20 on third and fourth down conversion combined.

“We stopped the run very effectively, which we did not do a year ago against this football team,” Iowa State coach Paul Rhoads said. “The down four were a big measure in that.”

The Bears’ leading rushers (Lache Seastrunk and Nick Florence) totaled only 30 yards each.

Cyclones rushing attack back on track

The Cyclones roughed up the Bears for 176 yards on the ground.

“The backs and the offensive line are equally responsible for it,” Rhoads said.

Linebacker A.J. Klein on the play of his fellow linebacker Jake Knott

“Jake being the guy he is and the kind of player he is, he’s hard nosed. He wants to play every single game he can.”

–       Iowa State improved to 13-2 under Paul Rhoads when it wins the turnover battle.

–       Chris Young was steady for Iowa State on Saturday. The senior notched seven catches for 61 yards.

–       Tight end Ernst Brun continued to add to his impressive season. He finished with six catches for 76 yards, including a nifty one-handed grab in the second quarter. 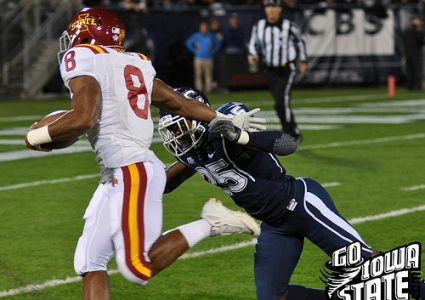