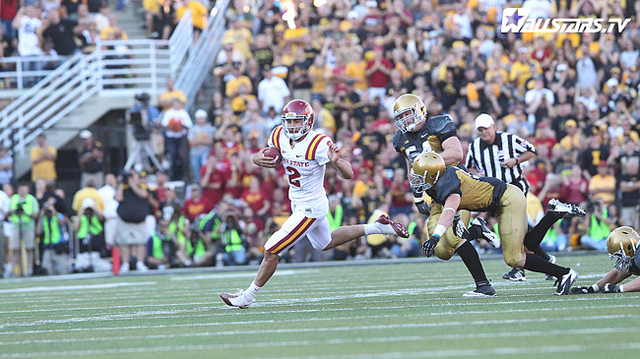 Monday Musings is running a day late this week and here’s your warning right now: Excuse me if I seem a little down in the dumps on this gorgeous October Tuesday here in central Iowa.

Besides my family, I have three passions in life. In no particular order, those are country music, the Atlanta Braves and covering your Iowa State Cyclones.

In the past week, I’ve learned that George Strait will be going on his final tour EVER in 2013, come to the realization that Chipper Jones’ legendary career is just about over and yeah – you all saw what went down inside of Jack Trice Stadium on Saturday evening correct.

It’s time to fire up the ole’ Cyclone Fanatic jukebox.

Onto this week’s musings…

If that’s the kind of pass protection an Iowa State quarterback is going to get in the Big 12 this season, I’m just not sure that it matters who is taking snaps for the Cyclones.

Does Paul Rhoads need to go to his bullpen this Saturday in Fort Worth? Maybe. After all, bringing Jared Barnett off of the bench last season was a major part in what ultimately turned things around for Iowa State. The line played better. Receivers seemed to get open easier. That zone-read actually worked.

But I’m not about to pin Saturday night’s loss and all four turnovers solely on the back of Steele Jantz either. He made some bad decisions no doubt. Some really bad ones in fact. That fumble late in the game was mind-blowing. It just can’t happen. Steele doesn’t seem comfortable running that zone-read at all. But all-in-all, Tech’s defense played Iowa State’s offense like a banjo.

All I know is this. After going back and watching the tape last night, the only aspect of Iowa State’s 88thranked offense that wasn’t bad on Saturday night was the group of running backs. I thought that they did all they could do with what they had to work with – that being little to no running room and a stacked box that just dared Iowa State to throw the ball down field.

It was hard to find any other positives. And that’s why you can’t just as Paul Rhoads pointed out yesterday, get out your "sledgehammer" (I prefer the term “pitchforks" myself) and go after the quarterback. I’m not defending Jantz and the turnovers, just pointing out that from the line to the receivers to the play calling on down, Iowa State’s offense didn’t have a very good night.

— What do I think will happen on Saturday at TCU?

— The good thing about Saturday is that as I’ve been saying since June, I think that the Horned Frogs are very, very beatable. It’s actually a pretty decent match-up for Iowa State in the Big 12. That’s not a shot at TCU. It’s a good football team. Gary Patterson is in my opinion an elite coach in college football. But this isn’t a game in which Iowa State knows it will have to score 35-plus points to win. It’s a Kansas State type of game. Get ready for a hard-nosed slobberknocker. Create a few turnovers, punch a few balls in the end zone and Iowa State can be in this thing to the end. I expect Iowa State to be in this game in the end.

— And I think that the Cyclones will do exactly that. Jack Whitver, Brent Blum and I talked about this on Cyclone Reaction late Saturday night. This game actually sets up quite well for Iowa State. Over the last three years, think about when you’ve felt the worst about this program.

For me, it was heading into the Nebraska game in 2009. Alexander Robinson and Austen Arnaud were both out. Iowa State was 4-3 at the time but the wins were over North Dakota State, Kent State, Army and an RG3-less Baylor squad. That was right before I had gotten hired here at Cyclone Fanatic. I attended that game with my dad and a host of Husker fans in Lincoln. Tailgating wasn’t what I’d call fun. The post-game party was fantastic though.

In 2010, it was no doubt after a 52-0 road blowout at Oklahoma. The Cyclones went on the road and beat Texas for the first time in school history the next week.

Last season, it had to be after the fourth loss of a four game losing streak. This one came at the hands of Texas A&M, in which Paul Rhoads replaced Jantz with Barnett early in the first half. Barnett was an immediate spark that day but still struggled, completing only 16-of-36 pass attempts. The next week the Cyclones invaded Lubbock and spanked the Red Raiders 41-7.

I’m not guaranteeing a Cyclone win at TCU on Saturday by any means. But I am insisting that you should fully expect your team to be ready to play this weekend. Paul Rhoads’ track record speaks for itself.

— In this scenario, I think that the whole "TCU has to prepare for two quarterbacks" point is overrated. It isn’t like Jantz and Barnett are polar opposites. They have their differences but will both run the same scheme for Iowa State.

— What’s your opinion? Join thousands of Cyclone Fanatics debating this topic right now on our forums. —

— I re-watched the West Virginia/Baylor game last night too. Geno Smith completed 45 of his 51 pass attempts in the game. I also doubt that the West Virginia equipment staff even had to wash the Heisman contender’s jersey after the game either. The dude didn’t even get touched. By no means am I comparing Smith to Steele Jantz, but it’s a lot easier to complete passes at that rate when you’ve got all the time in the world. But at the end of the day, YOU HAVE TO MAKE THE THROW. Jantz had all day to throw in Iowa State’s 9-6 win at Iowa but still made multiple poor decisions that almost cost his team the game.

— As most of you know by now, Cyclone Fanatic is hosting a very affordable charter to the Kansas game on Nov. 17. We’ve been mind blown with the response that we’ve gotten. In fact, we just added a third bus to the trip. The best part is, all three buses will have DirectTV on them so you can watch games to and from Lawrence, all for only $85. DETAILS HERE. For real, you need to sign up quickly. These seats are going like hot cakes.

— So some friends invited my wife and me to the Chiefs/Chargers game on Sunday. I’m a Vikings fan as most of you know but the opportunity to go to an NFL game with good friends was too good to pass up. Kansas City turned the ball over six times. That means that in the two football games I took in over the span of 24 hours, I witness 10 turnovers by the home teams (combined).

— Speaking of the Vikings, SKOL. It’s funny how sports work. Three weeks ago, I was borderline irritated when the Vikes snuck past Jacksonville in week one. I didn’t want it to impact the Vikings draft position in the spring. Yeah, I’m that guy. I was gunning for the top pick! Now, I’m spitting mad that Minnesota lost to Indy in week 2.

Actually, let’s watch the classic rant. Considering it’s based off of turnovers, it’s kind of fitting.

Oh yeah. That’s right. Look at that upcoming schedule and tell me that the postseason shouldn’t be on my purple mind?