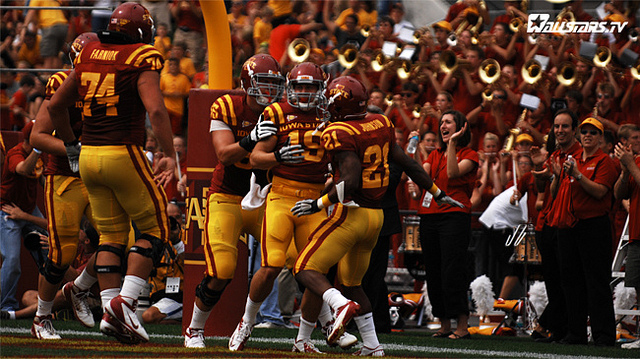 AMES — With a win over FCS Western Illinois this Saturday, Paul Rhoads’ Iowa State football program can sweep the non-conference portion of its schedule for the second season in a row.

Things are trending up in Ames. But exactly how high is the ceiling for a team that Rhoads calls his most talented since taking the job just over three years ago?

“We set no ceilings for ourselves," said senior defensive tackle Jake McDonough. "I think the sky is the limit for us. It just depends on how we come into each game mentally prepared and physically prepared. We have to know our opponents in and out.”

Day-by-day. Week-by-week. Quarter-by-quarter. You get the point.

"Let’s just figure it out and continue to improve every day that we step on the field whether it be for practice or a game," said Rhoads. "I think the statement I think I have shared in here before that you get the most improvement from week one to week two I think is a bunch of hogwash. I think you have the opportunity to improve every week and some weeks you are going to make bigger gains. Week six to seven might be our biggest week of improvement. That’s what we seek every time that we step on the practice field.”

And that includes Iowa State’s next opponent – Western Illinois who is currently 2-0 on the young season.

“There are a lot of similarities to the University of Iowa in how they do things," said Rhoads of the Leathernecks. "That would be complimentary as I was a week ago as they just play sound football. You see that on film from them fundamentally and schematically. Their defense has been making a number of key plays through two victories.”

After Iowa State’s defense held Iowa to only 68 rushing yards on Saturday and only six points to boot, it wasn’t a surprise when senior linebacker Jake Knott was named the Big 12’s Defensive Player of the Week on Monday morning. Knott had six tackles but most importantly, a game-clinching interception late in the fourth quarter that iced things up for the Cyclones.

“It’s a big time play," said Rhoads, who re-watched the play just before his media session on Monday. "They had gone to his side a couple of times in a row. He was chasing and pushing guys out of bounds and probably to the normal fan looking bad in the process. What’s he doing over there giving up those 10-yard plays? To come back in a tempo that fast, communicating with his linebacker partner next to him about what we’re looking for in this set, to see it, to adjust and to go up vertically like he did after 59 minutes of football and about 80 snaps, it was a big time play.”

After the interception, fellow All-Big 12 linebacker A.J. Klein embraced Knott on the field.

“He was just so happy," said Knott of their conversation. "He told me he was happy for me and that he was proud of me and that stuff. He loved me. The brother thing that you say when all of that emotion is running through you. It was a pure joy moment."

Rhoads said that the coaching staff gave the entire Iowa State defense the team’s "MVP Award" for the victory.

One of the best

Find a punter in college football who is off to a better start than Iowa State’s Kirby Van Der Kamp. Good luck with that.

In two games, Van Der Kamp has pinned each of Iowa State’s opponents inside the 20-yard line five ties a piece.

“He is cerebral about the game," said Rhoads. "There are about three or maybe more approaches if you can believe that to punting a ball in a pooch situation based on wind, based on field position and based on his confidence level. He analyzes it and then goes out and executes it. To go out and have 10 punts inside our opponents 20 yard line in two games has gone a long way in victory I can promise you that.” 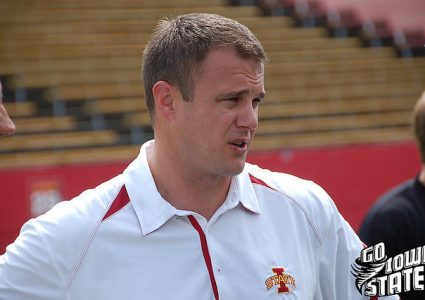