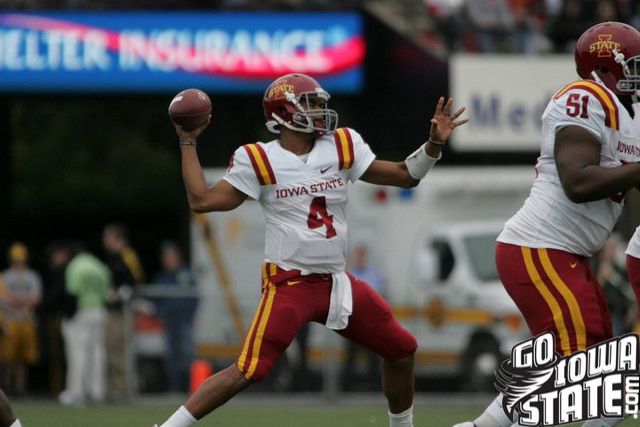 When good football teams are challenged, they answer.

That’s exactly what Iowa State did on Thursday night with a methodical touchdown march late in the fourth quarter. The clutch drive helped push Iowa State (1-0) to a 27-10 victory over Northern Illinois at Jack Trice Stadium.

“The kids’ focus was great,” Iowa State head coach Paul Rhoads said. “Their resolve was equal to that. That was a huge drive to get into the end zone and score those points.”

After watching their lead dwindle from 17-0 to 17-10, the Cyclones needed a spark when they took the ball with 8:48 remaining. With the Huskies clearly holding the momentum, Iowa State relied on its senior signal-caller, Austen Arnuad.

Like he had all night, Arnaud spread the football around. First, he hit tight end Collin Franklin for five yards. Receptions by Darius Darks and Josh Lenz gave the Cyclones a first down at their 49-yard line.

That set up a beautiful Arnaud pass to a wide-open Franklin down the middle for a 34-yard strike to the Northern Illinois 17. Four plays later, Alexander Robinson rumbled in for a 5-yard touchdown to close the book on any potential Huskies comeback.

The Cyclones tallied 403 yards of total offense against the Huskies in the game, including 138 on the ground.

Arnaud finished the night 27-of-36 passing for 265 yards. The Ames native also added 55  yards on the ground with a touchdown.

As always, there was room for improvement, too. Arnaud threw two interceptions, one of which came in the Iowa State red zone.

“I think (Arnaud) was inconsistent,” Rhoads said. “I think he made a number of throws he didn’t make a year ago – meaning accurate. He made some good decisions out there on the field, and then he made some blunders that looked like really bad tosses.”

The good news is the Cyclones’ roster includes a bevy of talented players who can catch Arnaud’s passes. In total, he hit eight different receivers. Darks led the squad with six receptions on the night.

“We love it,” Franklin said about Arnaud spreading the ball around. “Obviously, he has a progression to go through every game, but at the same time, he finds the open man.”

Franklin back in the groove

Finally healthy after a disappointing 2009 season, Franklin proved to be one of Arnaud’s favorite targets on Thursday. The senior caught five passes for 75 yards in the season opener.

That’s quite a different story from last year when he battled the H1N1 virus and lost more than 20 pounds off his 6-5, 252-pound frame.

“I’m feeling very healthy,” Franklin said. “I think that makes a major difference. I’m a lot more confident. I’ve been healthy the whole year, so I’ve been able to work through camp at the level I’m capable of.”

The extra work in fall camp allowed Franklin to bond with Arnaud. That was evident early on Thursday. He caught Arnaud’s first pass from scrimmage. As the game wore on, Franklin found himself consistently open after running crisp routes.

"I love Austen – he’s my boy,” Franklin said. “We’ve grown a lot closer off the field which has allowed us to grow our chemistry on the field. What’s good is, the chemistry is growing as a team and as a unit. Everybody is meshing well together.”

It didn’t take long for Iowa State to show its big play capability against the Huskies – if it weren’t for the refs that is.

On their first series, the Cyclones’ offensive line opened a gigantic hole for Arnaud as the QB rumbled 53 yards for a would be touchdown. Unfortunately for Iowa State, the play was called back due to an illegal procedure penalty.

The Cyclones got another chance in the second quarter. This time, Robinson exploded through the right side of the line for a 63-yard touchdown scamper. The senior wasn’t touched until nearly 60 yards down the field.

Arnaud saluted his offensive line for a job well done.

"There’s no doubt they are the unsung heroes of the team always,” he said. “Those guys get no credit and they do the toughest work. Our O-line tonight played great.”

Making his first start in a Cyclones jersey, Jake Knott showed he belongs. The sophomore recorded nine tackles, including one for a loss. He also picked off two Northern Illinois passes.

Knott joked that it was the first time he has caught a pass since he was a senior at Waukee High School.