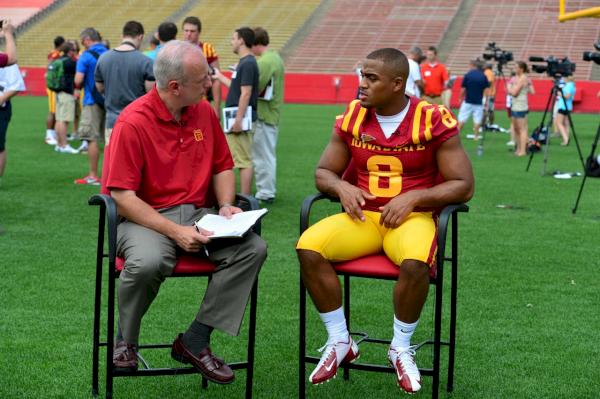 A quick "five questions" with John Walters days before kickoff 2012…

CF: Never once have I underestimated this Tulsa team but I’ve got to be honest with you John. The more research I do on the Golden Hurricane, the more nervous I get from an Iowa State perspective. Based off of the prep that you’ve done so far, which match-up on Saturday gives you cause for concern?

JW: I think Willie Carter is a match-up nightmare for opposing coaches. It kind of reminds of James Casey, Tom Herman’s H-Back at Rice. Tulsa will put Carter all over the field. At 6’2", 231 pounds, Carter has the size to deal with linebackers, but also the speed to break free in the open field. All that being said, Wally Burnham’s biggest emphasis with his defense every week is to have his players correctly positioned at the time of the snap. Iowa State has smart players on defense, and tons of experience at linebacker. If the Cyclones contain Carter, their chances to win improve greatly. But, an example of what can happen when you lose track of Carter? SMU. In a Tulsa victory over SMU last year, Carter had 13 receptions for 173 yards. Ouch.

CF: Which match-up on Saturday do you think Iowa State clearly has the upper-hand in?

JW: Tulsa’s front-four is a veteran experienced group, and so is the back end of its secondary (with returning starters Dexter McCoil and DeMarco Nelson). But the Golden Hurricane have some big holes to fill at linebacker. As a senior, Curnelius Arnick was among the national leaders last season with 159 tackles. I think Iowa State’s depth at running back can be a huge factor in this game, testing the Tulsa linebackers. Iowa State’s quarterbacks will be a big part of the rushing game this year too. I really feel that the Cyclones can average close to 200 rushing yards per game this season. And, if they rush for 200 against Tulsa, I think they have a great chance to win.

CF: To me, wide receiver is the most unknown position on Iowa State’s roster a few days away from kickoff. I know that you’re high on Josh Lenz and rightfully so. But besides Josh, which Iowa State wide receiver do you think is due for a breakout season?

JW: I’m really excited about Lenz being healthy this season. I love the way he plays. I think he has the potential to earn All Big 12 honors. ISU seems to have a lot more quality depth at WR this season. I think the sleeper in the group is Jerome Tiller. At 6’3", he’s a big target. And, in camp, I thought he showed great hands. I wasn’t sure what to expect with Jerome’s transition to a new position. But, a lot like Austin Flynn, I think he’s thrown himself into it 100% (or, as Diamond Dave would say, one gazillion percent) and I’m excited to see the results on the field.

CF: Tell me a little bit about the first month of your working for Cyclones.TV. Your live Media Day coverage was fantastic. Personally, my favorite part of the product is the archive section. I love going back and listening to past games. But I know that you guys are planning on doing some new stuff once the season starts too. Can you give us a sneak peak as to what some might be missing out on?

JW: I’m having a blast. There are so many things I can do with Cyclones.tv that I couldn’t do in conventional TV. Yesterday was a great example. I put together a seven-minute story breaking down the match-up with Tulsa. At a TV station, the most you could do was about 1:30 on any topic. But here I was able to show Tulsa players in action, and have Paul Rhoads talk about their strengths. I think it’ll be fun for fans to see those pieces each week to better familiarize themselves with that week’s opponent before they go to the game. I did a ten-minute feature on Fred Hoiberg’s induction into the National High School Hall of Fame. That never could’ve happened at a TV station.

The live, one-hour Media Day special was a great way to kickoff our coverage. We hope to do similar things with Media Days for men’s and women’s basketball. We’ll have live press conferences (also archived to watch at your convenience), archived coaches shows and game replays, a weekly Olympic Sports show, classic games, a live telecast of the Cyclone Cydline Show from Applebee’s each week, etc.

One thing that I’m not sure our fans realize – if you sign up for Cyclones.tv (first full year for $59.95 if you sign up by Friday) you’ll also get ALL of our Cyclone Radio Network programming (all home and away football, mbb, wbb games LIVE, plus call-in shows LIVE). So, even if we can’t show a game live because of TV network restrictions, you’ll still get the radio broadcast as part of your subscription.

CF: I assume too that with anything (we’ve experienced this with our website over the years), Cyclones.TV will only continue to grow with time. I know your staff and it is a great group. Tyler, Dani and the crew are a creative bunch. Is that part of the fun of this for you? Going to work knowing that the sky is the limit with this cutting edge project?

JW: It absolutely is. I’ve always admired the work that Tyler Rutherford and Dani Varley have done in the past. And Bryan Perry does a great job with the live game telecasts. Many of our fans are familiar with the "hit tapes" that Dani produces each week during the football season. It’s about a three-minute video, put to music each week and released the day before the game. The amount of time and effort that Dani puts into those hit tapes is amazing. It’s literally a week-long project to get them ready. But, based on fan feedback, that time and effort is greatly appreciated by our fans. This week’s hit tape will blow you away – it’s awesome.

Fans who have had Clone Zone in the past will notice a great improvement in the production value of live games. The graphics are much better. The picture quality is much better. I think they’ll be impressed, starting with the home volleyball match vs. UNI next Wednesday. Also, they’ll be able to see our archived radio call, matched up with our pictures from football games each week.

I think the sky is the limit. And I hope fans who have the product now spread the word. Signing up for Cyclones.tv is a great way to stay connected to Iowa State, support ISU athletics and enjoy "all Cyclones, all the time". 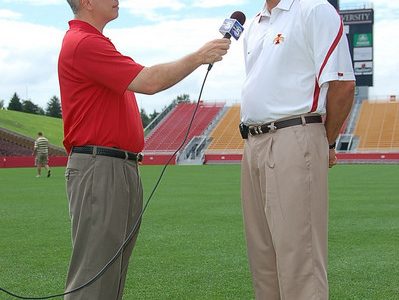 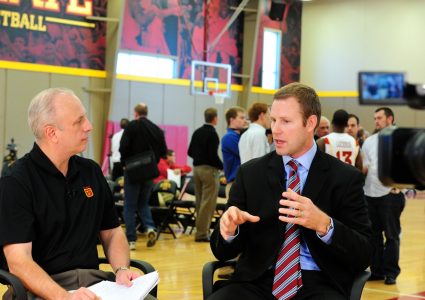 A conversation with John Walters