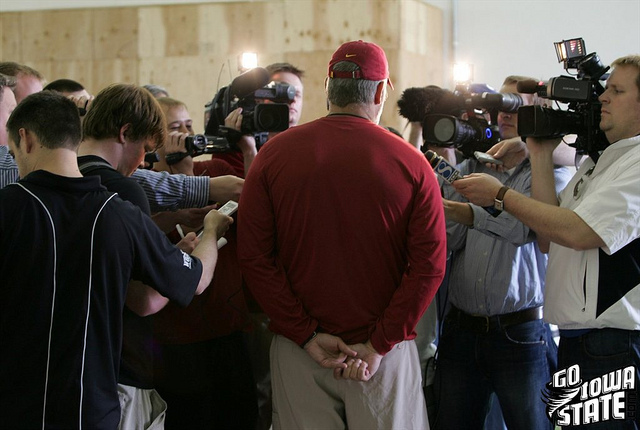 Today’s roundup consists of only a few stories, but fairly substantial ones regarding the world of Iowa State athletics. Let’s start with some recent comments made by head football coach Paul Rhoads.

6 or 7?: Paul Rhoads wants to keep bowl qualification the way that it is. Six and you’re in.

“With the strength-of-schedule the way it is, there’s a lot of times you’re winning six football games and you’ve got a heck of a football team and you’re accomplishing quite a bit," Rhoads told the Cedar Rapids Gazette on Tuesday. "I would be disappointed to see any kind of change made that way."

Of course he would. Rhoads has led Iowa State two bowl games in two of his first three seasons at the school, going 6-6 in the regular season both times.

Mike Hlas, the author of the above linked story, when he wrote that Rhoads likely speaks for most coaches out there. Austen Arnaud and I will discuss this topic in a podcast that we’re recording later today.

POLLARD ON BIG 12: The Cedar Rapids Gazette had yesterday’s "Tailgate Tour" covered like a blanket. Reporter Jeff Johnson caught up with Jamie Pollard to discuss realignment.

“Right now, we are very committed to a 10-member league for a lot of reasons,” Pollard told the Gazette. “Our heads aren’t buried in the sand. If we need to expand, we’ll expand. But we’re not looking to expand. It’s fascinating to hear all this chatter. It’s clearly driven on their end. It’s a nice position to be in when somebody is trying to dance with you. But we’re fine being just who we are.”

CLICK HERE to read the story in its entirety that also includes quotes from Fred Hoiberg on Naz Long and Royce White’s draft status.

— Royce White recently got a new tattoo of Frank Sinatra. Notes on this and more from Randy Peterson. — Des Moines Register

— Bobby La Gesse chimes in with some thoughts on realignment. — Ames Tribune

— The Iowa State football program added a defensive tackle transfer to its roster this morning. — CycloneFanatic.com

— How does Florida State stack up against the Big 12? — ESPN.com