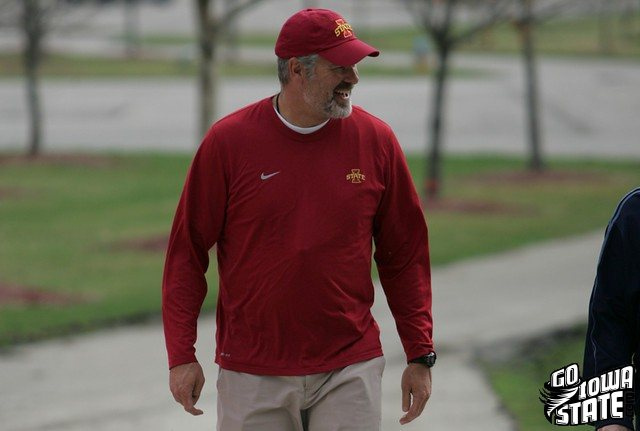 Talk about a busy, busy roundup for May 10…

Let’s start this thing off with…

PAUL RHOADS: Iowa State’s head football coach went on a media tour yesterday to promote his motorcycle ride to raise awareness of Alzheimer’s. Rhoads met with multiple media outlets across the country to talk about not only the disease, but football as well. Some comments that he made on 1460 KXNO’s Murph and Andy Show as well as the Des Moines Register  made some members of the Cyclone Nation quite anxious.

CLICK HERE to view those quotes from the Register.

My take? Just relax. The guy is doing what he does. That’s be honest. You can’t praise him for this trait one day and be upset by it on another. This honesty is one of the reasons that Rhoads’ popularity is at the level we’re seeing right now in Ames.

And as Keith Murphy said last night on WHO-TV 13, there was once a day when nobody thought that Dan McCarney could ever be fired…

JAKE CAMPOS COMMITS: The top football recruiting prospect in the state of Iowa for the class of 2013 has committed to Missouri. Jake Campos, a 6-foot-7, 250-pound offensive tackle chose the Tigers over Iowa State, Vanderbilt, Illinois, Iowa, Kansas, Kansas State, Oregon and Purdue.

CONTRACT FOR KO: Kelechi Osemele has signed a four-year contract with the Baltimore Ravens.

NEW HOOPS PROSPECT:  We flirted around with this topic on our men’s basketball forum yesterday. Today, Jeff Borzello of CBS Sports tweeted the following:

Finney-Smith, a guy who once source told me is a future pro, will be a tough one for Iowa State to land. But with two scholarships open for next season, I expect Fred Hoiberg to slap the full-court press on this target.

A LOT OF SMOKE: Are we on the brink of round three for college realignment? Mr. Realignment, Chip Brown of OrangeBloods.com, is back on the story. He makes a pretty convincing case as to why Florida State might consider joining the Big 12 in this column.

— The 2011-12 Iowa State men’s basketball team didn’t only excel on the hardwood last season. These guys got it done in the classroom as well. — Cyclones.com

— The 2012 Cyclone Tailgate Tour will begin on Monday in eastern Iowa. — Cyclones.com

— If you’re into realignment, this is a must-read. — Andy Katz, ESPN.com

— Brent Blum and I recorded a podcast last night. We talked a lot about the current state of the Big 12 and ranked the league’s football coaches too. — CycloneFanatic.com